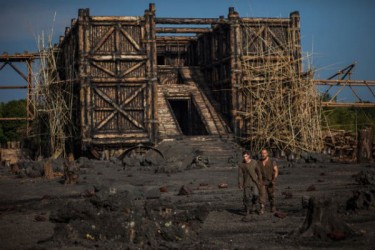 Fair Value of Noah: $15.00. It’s the one Darren Aronofsky film that you can watch with your whole family. That’s less than a compliment but more than an insult. By that I mean that it’s simultaneously Aronofsky’s most accessible and least interesting film. Still, Cecil B. DeMille would be envious, and even Aronofsky’s worst film is still better than most of what’s currently clogging the silver screens.

It’s the End of the Worlds as We Don’t Know It: I’ve always been fascinated by antediluvian culture– the intimations of entire civilizations washed away before writing even existed, be it the Minoans or Mohenjo-Darra. Aronofsky seizes upon this to give us a world before our world teeming, with strange and supernatural life. Most striking are the Grigori, the ancient ‘Watchers’ of Talmudic lore- in Noah, they are synthesized with the Giants of the Old Testament, a legion of walking rock golems. The lands teem with many strange beasts that apparently don’t make the Heavenly cut for preservation, such armadillo dogs.

Do I need to summarize the nigh-universal creation myth of humanity? Angry god, dude, flood, boat. Done. Depending on your preferences, you can call him Deucalion, Cessair, Utnapishtim, Manu, Yu, or Noah. Who in this instance is played by Russell Crowe, sporting a suitably Old Testament beard. He’s a refugee, the last of the line of Lamech, living with his family in fear of Tubalcain (Ray Winstone), the murderous descendant of Cain and leader of all mankind. After a suitably vivid and symbolic dream, Noah leads his family on a hike to New Zealand, to speak with his grandfather Methuselah (Anthony Hopkins). After enjoying a spot of hallucinogenic tea with his grand-dad, Noah decides to become the world’s first resort cruise entrepreneur. 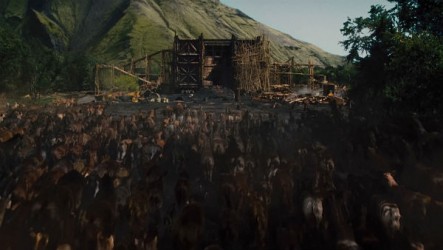 The left-field skew of this film is in the themes of environmentalism. Apparently, carnivore is the biggest sin; Noah’s hunter-gather vegetarianism is apparently what makes him God’s select. Allah shops at Whole Foods, I suppose. This is actually an interesting inversion of prevailing anthropological theories on the Cain/Abel/Seth/Tubalcain myth cycle. Many anthropologists will tell you that the Cain and Abel legend really reflects the displacement of traditional hunter-gather societies by the more advanced collectives of ranching societies. In this model, it’s Cain that’s the berry eater and Abel who is the barbeque enthusiast. But I guess you can’t do sodomy, fornication and genocide on a PG-13 rating, so let’s have baby back ribs as a stand-in for the collective evils of humanity. This is the biggest cop out; if you’re going to film evil, film evil. These are strictly Sunday school baddies, as tepid as grape juice that’s been substituted for Communion wine.

From a more modern point of view, this film works as a dialogue in modern Christianity between the ‘Stewardship of Adam’ and the ‘Dominionist’ views of environmentalism in fundamentalist and evangelical Christianity. Noah could almost be a stand in for John Muir, arguing that the preservation of the planet is a part of mankind’s penance to God; Tubalcain is the dominionist, all but quoting Ann Coulter in saying “The Earth is ours- let’s rape it.”.

And you know what? If this is what it takes to get the Bible Belters behind the cause of carbon emission reduction, then I’ll take it. Better this than the 14th century jew-baiting of Mel Gibson’s The Passion of Christ. Though I get the feeling that we might as well be tap dancing on the Titanic for all the effect it will have on halting the floods to come. 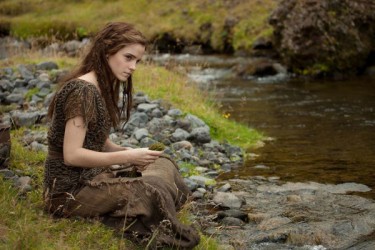 If you’re going to re-people the earth, this is my first choice to start with.

What really makes the film tick along is how it fills in all the details that were left out of the Bible. How did the Ark actually get made? Unpaid rock giant sweatshop labor. How did Noah stop the lions from eating the giraffes? Potent, potent drugs. How did Noah’s three sons re-populate the planet? Incest. When you think about it, the Old Testament explains a great deal about that peculiar Southern custom: Isaac and Rebekah, Lot and Sarai, Jacob and Rachel…..there sure are a lot of old testament anecdotes to justify the cousin-loving, I’m just saying.

The casting of this film is probably the most inspired part of the film-making. If it were upon me to select two women to re-populate the planet earth, I, also, would choose Jennifer Connolly and Emma Watson. Ray Winstone, as Tubalcain, is sufficiently coarse and feral as to serve as a one man justification for wiping the face of the earth clean. However, I find it interesting that Aronofsky picked Crowe and Hopkins. What does it suggest about humanity when the progenitors of the species are Hannibal Lecter and Sid 6.7? Crowe’s performance, however, glides right along the perfect balance between authority, confusion, and insanity. That ambiguity in his performance, between what is divine inspiration and what is just being a garden variety psycho is what gives the film the dramatic tension that it has.

Demerits, however, for eliding on the decadence of the Enochian civilization. The baddies in this film are one step away from just being a poorly organized renaissance faire. Lots of violence, blacksmithing, and black leather; but I never felt they were particularly evil, just your garden variety Neolithic nomadic society. 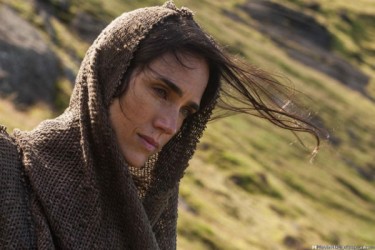 And if you’re going to repeat a tasteless joke, this is my second choice as to who to repeat the joke with.

God- The Ultimate Passive Aggressive: I can think of no phrase more detrimental to humanity than “Imshallah” (or “Deus Vult”, to you Catholics)- “If God wills it.”. It is not only sloth, but it is assigning that sloth onto the creator of the universe, thus compounding sloth with pride. I don’t need to vaccinate my children, it’s God’s will that they live or die; I don’t need to judge who I slaughter, God will know his own.

Judeo-Christian-Islamic religion is the spiritual mindset of an abused child. God plagues us, God scourges us, God asks us to kill our children and fight endless wars, but it’s ok, because after he sobers up, he comes back and God’s sorry and God forgives us for making him so angry that he had to beat us. The theodicy of the Old Testament is the caprice of a child, a demented 5th grader’s notion of justice and fairness. Stopping just short of the killing blow is not love; nor is the threat of eternal suffering a sane way to demand either love or worship.

The Deluge is really indictment one in the case against God, the first of his many, many crimes against humanity. If you accept the existence of an omnipotent God with theoretical agency over all universal events, then you have to also accept that His mass murders put him easily at the scale of a few kilo-Hitlers (that’s a scale for Cosmic Evil by the way- how many thousands of Hitlers are necessary to equal your evil). Really, were all of the people of Nod evil? Even the little babies? And Noah asks us to applaud the man in the life boat, who forces his family to ignore the screams of the drowning thousands who cling, desperately to the sides of the ark? He is the good one, for only looking out for his family, and no others? Not so much as even Lot, to search for a good man amidst the city? My sentiments towards the hypothetical Almighty are best represented by slightly mangling a graffiti found at the Mathausen concentration camp: If there is a God, He will have to beg Our forgiveness.”.

As shown in this film, Yahweh is a very deist being, a god so cryptic and enigmatic as to be a worthy idol for Edward Nigma, The Riddler (from Batman). What is the Testament of a God that speaks entirely in cut time-lapse montages from Koyaanisquatsi? Possibly the second most subversive aspect of this film is to suggest that Noah is not so much following the Blueprints of the Most High as he is kludging through Ikea Instructions of Paradise. Noah may be following God’s will in the big details, but he’s really just projecting himself into a lot of the more minor policies. 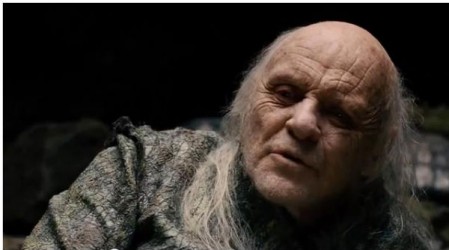 Wait, Hannibal Lecter is secretly God? That….actually perfectly explains everything about this universe.

Darren wrestled the angel, and the angel was overcome. Despite my quibbles, I think this film is an evolution and a turning point in Aronofsky’s cinema. Every Aronofsky film is about how the human is destroyed by the Absolute. In Pi, the cast is undone by the study of pi, the perfect number, the number of infinity (*spoiler* the number of God). Requiem for a Dream is exactly that- a requiem for the dream of the perfect high, that mythical dragon that drives forward the stumble of addiction. The Fountain was about the pursuit of immortality and eternity, and how people sacrifice themselves and their relationships in that pursuit. The Wrestler shows a man who destroys himself in the service to the legend of himself- Randy Robinson could never manage to be ‘The Ram” forever, and that is what kills him. The Black Swan, Aronofsky’s greatest film, is about the destruction of artistic creation- to achieve her masterpiece, the protagonist has to dedicate herself so completely as to destroy herself.

Noah is a critical divergence from the Darren’s usual themes. In this installation, we have the nigh-ultimate annihilation of humanity through the abandoned pursuit of the Absolute. It ultimately becomes a film about mercy, lenience, and abandonment. Through the film, Noah tries to be ruthless, in the obedience to a ruthless God that dictates utter destruction and commands unhesitating servitude. Survival, it is suggested, consists of abandoning that absolute figure, that awful presence which demands you kill your children, that tasks you with perpetuating a cycle of mortification and self-abuse. And there, subtly, does Aronofsky raise his most provocative insight: the notion that God is too abstract to be even within the realm of theology, and that all religious notions, ultimately, are merely the projections of human psychology upon a larger universe. As scenically flat as I felt to be, as dull as the dialogue was, I think this film merits a second watching.

This film is best regarded as a closing part of a trilogy, along with Pi and The Fountain. With these three films, the director has told the most cerebral and beautiful recounting of the Book of Genesis. Pi is the tetragrammaton, the great “I AM” (which according to some qabbalistic theories, is the ultimate derivation of YHVH- God is nothing more and nothing less than the Monad of all existence). The Fountain is about the Garden of Eden. And now, with Noah, we get the deluge.

I wonder if we’ll get to see Aronofsky’s The Offering of Isaac at some point. I certainly hope so.