Home / Reviews / Movies / PASSION OF THE CHRIST, THE

PASSION OF THE CHRIST, THE 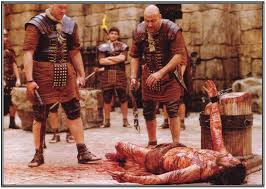 It was bitterly cold the other night and there was no better place to be than curled up with the old lady next to a hassle-free gas fireplace, quaffing some wine, watching a movie and smiling to yourself because you’re not homeless and you know you’ll be getting laid later. We were at her parent’s place and they have a rather large DVD collection, so I figured that their tastes would offer me up something interesting and unseen. A bunch of shite, really. Who owns Mission Impossible 2 and none of the others? Who just has to have their own copy of Hitch on battle-ready stand-by? Giving up any possiblity of cinematic intrigue, I mentally shift to “what can I relentlessly mock?” My question is quickly answered…The Passion of the Christ, of course.

I ignored this movie as much as possible during its juggernaut theatrical release, because I was quite certain that most paying audiences would not welcome some jerk uncontrollably guffawing at their simpleton faith, much less the ultimate suffering of their Lord and Savior. They leave me alone, I leave them alone. Same goes for the bears.

I knew the day would come where I’d be in a safe place with a safe audience in which to Wisenheimer my way through this movie, anticipating giving it no more respect than a Seagal & Biz Markie romp through the TNT graveyard shift in “Beat Box Beat Down.” I was way off. You know how most reasonable people describe this movie as “Jesus getting pummeled for two hours,” right? I thought this was just an over-simplification due to lack of insight, but it is really the case.

I’m like three years late to the Passion dogpile, but that still doesn’t prevent me from stating that this is the most disgusting, irresponsible and pointless movie I’ve ever seen.

90% of the film is Jesus getting beaten to fucking mush, then doing a slow-mo sailor-dive into the dirt.  Pan to Mary making the exact same sad, heavy-lidded face Adrian made every time Rocky got knocked down…repeat cycle 100 times. Torture heaped on torture with the sole intention of guilting impressionable people into acknowledging sacrifice that is ultimately meaningless…dangerous, really.

Then there’s the anti-semitism. I don’t give a good fuck about how any religion is depicted because they’re all blood-soaked hypocrites in my book, but Mel went nuts on this front. It’s easy to cry anti-semitism given historical persecution, but personally, I’m not typically so knee-jerk. The people depicted in this movie are from an age of savagery and should be held accountable only in the context of their time. Maybe the Jews did kill Jesus. So what? For this to really matter, you’d have to acknowledge his value via his divinity, otherwise he’s just another guy who ended up on a cross because he threatened the established power.

Funny how the Jews still get the shit end of the whole “killing Jesus” deal while ironically, the very center of the Catholic Church now lies in the Capital of the Roman Empire. Last I checked, the brutes who so enjoyed their job weren’t the Jews who actually had something to lose in this tale, they were mindless Italians who exceeded the level of torture mandated by their “conflicted” superiors even though they had little or no personal stake in the Jesus matter. Today, everybody loves the Italians…well, at least their food and the Mafia.

Anyway, the Jews have had to deal with this burden forever and its been used as an excuse to hate them, even exterminate them. Mel apparently doesn’t think this is enough. He has to eye-ball fuck you with Jew. The Pharisees are such vile, hook-nosed, bushy-haired sadists that I found myself wondering if they put a pen in the hand of Goebbels’ corpse jumped him with a car battery while the concept art was being developed. Even when the wise and benevolent Pontius Pilate starts playing Let’s Make a Deal with them–first offering up a lovely Flog & Flay package, then a swap where they get a cartoonishly hideous and unapologetic murderer instead of the false messiah–but it proves futile as the bloodthirsty Jews refuse every prize behind Door Number Two, incessantly squawking for the crucifiction of JC like Heeby Macaws. The whole depiction is an insult to everybody, Jew or not, because it is deliberately hateful and ignorant, yet is packaged in a way barely sly enough to dupe most of the audience.

The only other notable thing in this film, and the only thing I actually found humor in, were the over-the-top devils, demons and torturers who look like they just wandered onto the Passion set from a Tool video being shot in adjacent Studio 2C. There was a Borg Queen cuddling her mutant baby. Ridiculous Imps chased Judas to a Michael Hutchence doom. Every earthly villain had a mouth full of yellow teeth framed by a vicious sneer to remind you that they were evil. Like everything in this film, there was never any subtlety. There was no effort to involve the viewer on any level beyond visceral. In all seriousness, it was like being at a Gwar show with Gwar replaced by Stryper…wow, I managed four music references in a single paragraph.

I recalled that a lot of Christians show this movie to their children, an act that can be equated to nothing if not child abuse. The fact that in parent’s minds, this one-note mortification of corpus christi is exempt from scrutiny due to its untouchable source material, however, I’m sure an F-bomb or nipple wouldn’t enjoy the same leeway within the confines of their twisted ideology. There is no lesson for a child to learn here. There is nothing but mindless trauma and needless guilt to be had, things traditionally learned through repeated molestation, hardly reasonable steps along the Good Path.

In the end, I went to bed exhausted from trying to find a point. Certainly the ceaseless brutality and sickening nature of torture would do this to any decent person, but what bothered me most is that the film’s content greatly effects reality. You don’t just watch it, say “wow, that fucking sucked, glad I’m not that guy,” and go on with your life. This mythology drives the world. It empowers a self-loathing homosexual meth-user to become a leader of millions, the personal sage of arguably the stupidest and most powerful man in the world. The perverse abstraction that a Total Dick God served his child up to die for the salvation of man is bizarre in its own right, terrifying when you realize that so many still hold millenia-old savagery and the accompanying illogical lessons at the very core of their lives.

I couldn’t wait to go to work today to discuss this with my uber-Christian employee. I treat him with respect because he affords me the same, despite the fact that I have a child-out-of-wedlock, admitted culpability in past abortions, and am generally a ranting douche, but I just had to seek his opinion because I needed to know if there was some virtue that a non-believer like myself had missed.

Masking my horror as much as possible, I asked him about it. “It was a very powerful and moving film.” I asked him about the Jew stuff. “Well, the representation of the entire incident is very accurate, I mean, they did kill the Son of God.”–he said that part like Chandler. I asked him if he’d let his kids watch it. “Absolutely not.” One-out-of-three was better than I anticipated, although he isn’t Catholic, so maybe his brand of Jesus is a little less steeped in blood, torture and symbolic cannibalism. I was happy to agree with him on something, although I did feel the need to expand the excluded audience from “children” to “everybody.”

I spent, actually sub-squandered, two hours of my life watching a man have his Birthday Suit made corduroy, get some speed holes, and then finally, after a truly merciless assault on the viewer, die…at the very least he dies asking why he has been forsaken, at last questioning the actions of his Total Dick God.

There is nothing else to say…This is the worst movie ever. Those who praise it are obligated to, whether it be from fear of fumbled salvation, or cowardly critics afraid of being nuisanced by those defending the legitimacy of their own Grand Stupidity. In this, Passion ceases to be a movie and becomes more of an indictment of humanity. That’s some transcendent shitiness that even Battlefield Earth can’t front on.

Check out Matt’s review of this human made into sausage fest here.