Heaven Is For Real

You might not believe in heaven, but God dammit you’re going to believe in Todd Burpo. This infomercial for Todd’s best selling book is not about Jesus, Colton, or Heaven at all. It’s about one man’s greatness…one man’s bravery to extend his irrational beliefs into the realm of  lunacy and get you to literally buy in to his fantasy before the bank can take his house.  It’s the boldest of moves, ensuring Todd will never have to get a real job while cursing his son with child celebrity. Well played, Todd. Personally, I believe heaven is laughter, and nothing made me feel closer to God than my bootlegged camcorder copy of Heaven Is For Real, which was also hard-coded with Spanish subtitles.

The movie begins by revealing a typical day in the small town life of Nebraska Todd. He’s just fixing a garage door at a local business. Wait, what’s that? The business has no money?! Well you’re in luck Mr. Job Creator because you live in Toddville, where smiles are accepted currency.

Todd then drops by the fire department. Did I mention he is also a fireman? Todd hates fire. Hell is made of fire, and that’s where the devil lives. I just had a thought: Why don’t a bunch of Christian Patriots kill themselves so they can go fight the devil over there so that we don’t have to fight him over here? Or does that logic only work against poverty-stricken brown people who don’t have nukes?

Now it’s off to the local high school, to help coach boy’s wrestling. Oh yeah, you’ve got to grab him around the crotch, Hayden. Now pin him hard for Mr. Todd! Sniff that wrestling mat. Going to have to untuck my shirt soon! It smells like Jesus in here. Any of you want to go for a ride in my big red firetruck!?

We aren’t surprised when Todd brings the fresh scent of sexual frustration to a cemetery and puts some fresh flowers on a dead marine’s grave. Let’s call him Marine Todd. Yes, all this is really happening within the first ten minutes of this movie, and it only gets better. Todd arrives home after dark, and his wife is having choir practice in their living room. He’s just about to go inside when the hospital calls. We need you, Mr. Todd. Come quick!

No, I was not watching Garth Maranghi’s Darkplace. This was better. The absurdity wasn’t on purpose. This was unfiltered, organic, and effortless comedy. I started to feel myself drift upwards… ascending into bliss and madness

Todd walks into the hospital and is met by a stranger. Can you pray for my dad. He’s dying! Todd is all like, sure, I’m a dad. He’s a dad. You’re a dad. God is a dad. Jesus was his own dad because he was also God. We can all be each others dads here in Fireman Todd General Hospital. Gee Mister you smell like little boys! Shut up and drop me a beat. I am Fireman Todd and I came to pray.

Todd finally gets back home and is reminded by his wife, Ms. Todd, that they are having severe money problems. The preaching and garage door fixing business just aren’t paying for their gigantic house. Todd might accept smiles as payment, but the bank sure doesn’t. Hey, I have an idea. Todd could make up a colossal lie about his son seeing heaven, and he could write a best selling book which will be adapted into a movie where he is played by Greg Kinnear!? That would cram the debt right back up Satan’s ass.

The next day, everyone is in church. Todd’s best friend, played by Thomas Hayden Church, is sitting in the front row. This is getting so meta, right! This is like Danny Glover being in a movie about gloves! Anyway, Todd gives a sermon about a mighty lion trapped in a cave. I think it was only a metaphor or something, but I wouldn’t be surprised if the Nebraska State Legislator watches this movie and passes a law to put all lions in caves.

After church (the event not the Thomas Hayden) there is a softball game and Todd, who has a swing that reminds apple pies of freedom, belts a stand-up double to left. Jesus, who is coaching third base, tells him to hold up, but Todd wants to stretch this into a triple, to pay homage to the holy trinity. As he slides into third, he breaks his leg.

This is what happens when you fuck with the Jesus

The next scene, Todd is back inside church (the building not Thomas Hayden) and starts spazzing out in the middle of a sermon. Nope, that’s not the Holy Ghost. Those are what we later find out to be kidney stones. I think I’m starting to understand the metaphor now. The mighty lion was the kidney stone and the cave was Todd’s dickhole. God does work in mysterious ways. At this point I can’t wait for Colton Burpo to die. It turns out Todd has to miss a bunch of church (both the event and the guy) because of the lion in his salty cave, and people are getting kind of annoyed with him and all his bullshit, first-world injuries.

Finally, like an hour into this infomercial for Todd’s book, Colton’s appendix gives out. God pulls the old rupture and rapture routine and lets little Burpo through that big ol garage door in the sky. And while Colton and Jesus are playing with aborted fetuses inside Christopher Hitchens’ eternal nightmare, Todd is downstairs on earth spazzing out again. He’s really mad at God, for the money problems, for the broken leg, for the wiener pain, and for his hospitalized son. One of the drawbacks to believing your life is so important that it’s part of a complex web of divine puppetry, is that when things turn sour, you’re going to shake your fists towards the rafters and demand a wider dickhole.

But fear not, Ms. Todd makes a few phone calls, and suddenly the entire town is praying. We get a prayer montage, one of cinema’s rarest and most enjoyable scenes. Even the firefighters, put down their axes and ask the big guy in the sky to return little Colton.

Miraculously, he’s sent back with a stamp that says, From God To Todd. Little Colton Burpo is saved. But that’s when the medical bills start rolling in, compounding the financial debt. In one of my favorite scenes, the Todds tacitly wonder if they should even pay the hospital bills since they know it was the prayers that saved Colton and not the doctors. Disillusioned entitlement just doesn’t come any sweeter than this.

So you’re probably wondering how Colton described heaven. Well, it’s pretty boring. A white guy with blue eyes in a bath robe plays Jesus. He and Colton hang out with dead people, including his mom’s miscarried fetus, who grew up to be a little girl in heaven. There are lots of angels and even a fog machine. It would be considered hell by anyone with an IQ in triple digits.

At first, Todd doesn’t want to believe his son really saw heaven. He goes to a godless liberal atheist professor Marxist shrink and asks her what she thinks. She gives him a perfectly rational explanation, and he accuses her of being closed-minded. I love this movie.

Church (the man not the institution) offers Todd a loan, but he doesn’t take it. He doesn’t believe in handouts. Todd earns his money through old fashioned hard work, by accepting ten percent of his congregation’s income after giving them their weekly pep talk.

The Todds certainty aren’t exempt from godless, liberal ridicule on the internet, but the infomercial also deals with this happening in real life. Some asshole throws a few zingers at Todd as he leaves a restaurant. Classic Christian persecution, just like Glen Beck warned us about. It gets better though. Two libtard kids jokingly ask Colton’s sister something about him sitting on Jesus’ lap, so she punches them both in the face.

English translation: “Hey Cassie, is it true your brother sat on Jesus’ dick?”

One of the benefits to watching a camcorder bootleg is that you can hear the audience’s reaction. The left right jab combo sent the theater into a frenzy of applause. Yes, these bible thumpers who paid good money to see this tale might proclaim the tenets of non-violence, peace, and love, but they would climb to the top of the Thunderdome to watch snarky atheists get dismembered by a good, clean Christian chainsaw. 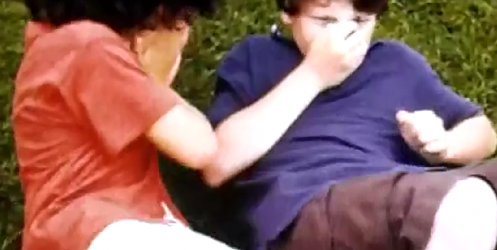 “Ouch, you punched us in our communist, Muslim noses!”

But it’s not all lib-punching and Jesus sitting. The Church is really getting sick of Todd’s bullshit. Marine Todd’s mom is mad because she’s concerned that Colton’s far-fetched story is turning the church into a joke. Here is her quote, verbatim: I don’t like that it feels like some fairy tale, just some simple, easy explanation of life. Yes lady, we’d hate for your belief structure that involves zombies, telekinesis, and the earth being six thousand years old to be sullied by a four year old getting a tour of heaven.

So the day comes when it’s time to put up or shut up. The media even shows up for Todd’s last day as a preacher. Everyone wants to know if heaven is really real son. Todd gives a heartfelt speech that hits home for people who believe in magic. He is predictably met with praise, applause, and a gigantic group hug from the entire church (the people and the man). I guess he gets to keep his job. And as the movie ends, Marine Todd’s ghost appears. He is even wearing his marine costume. He smugly nods at his mom, who feels like a total shitbird for not believing Colton’s story. 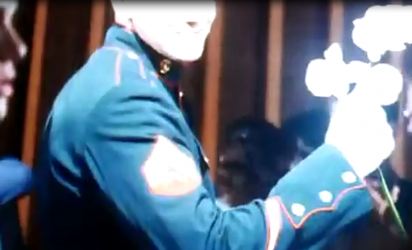