Home / Featured Posts / How to Train Your Dragon 2

How to Train Your Dragon 2

How to Train Your Dragon 2 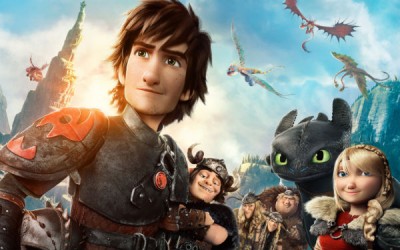 How Drunk Must You Be to Enjoy This Film? For those of you who don’t know, I rate children’s movies on the basis of the average intoxication that an adult would require to be lowered into a pit of howling proto-human homunculi, aka children, and then to stay there watching the picture. “How to Train Your Dragon 2” rates well, at only one Screwdriver and a pair of aspirin for chasers. In the cocktail rating system, a low number is better, high number bad.

This film is a better summer film than ‘Edge of Tommorrow’ or ‘Days of the Future Past’. It’s a fun expansion upon the premises of the first film.

What is the moral of this story? Bullies can’t be negotiated with by diplomacy. Which is why you should get all your friends to pin the bully down, while you apply strategic rib-kicks. 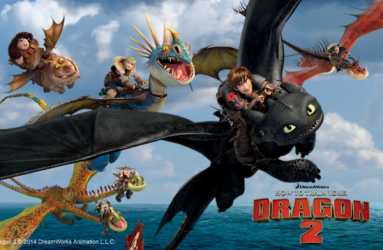 Neither parachutes nor oxygen canisters are a part of the training regime.

How Should You Train Your Dragon? As a tutorial this film is sadly sparse in information. Please bear in mind that aerial pyroclastic saurians are not legal as pets in California, and that I do not presently have any domesticable dragons upon which I can apply the lessons of this instructional film. But here’s the bullet points:

Please note that this film provides no useful advice on the two most important aspects of dragon training: how to housebreak dragons/clean dragon poop, and how to prevent dragons from igniting your community in a fiery holocaust of destruction. Because I consider those two matters to be essential questions in the field of dracostrianism (the art of the proper care and grooming of dragons), this film is worthless and a failure in an educational sense. But on to the plot-

Anne McCaffrey, eat your heart out: A lot has happened to Hiccup (Jay Baruchel) and the secluded island of Berk. Dragons have become fully integrated into a dragon riding society, to the point where the dominant sport is a Quidditch-like dragon racing game (with catapulted sheep in the role of the snitches). Chief Stoick the Vast (Gerard Butler) is proud of his son, and hopes to train him for inheriting the jarldom. But Hiccup and his companion Toothless have their eyes elsewhere. Hiccup is more of a Leif Erikson than a Svein Forkbeard, preferring to work on his flying stunts and to seek out new islands and horizons. This leads him to tangle with Eret son of Eric (Kit Harington), the captain of a crew of dragon hunters. But the roguish Eret is just an agent of Drago Bloodfist (Djimon Hounsou), an outcast who’s enslaving dragons to build an army….

From the Village to the Continent, from the Individual to the Family: How to Train Your Dragon 2 is really about the interaction between two themes: going outside of your community into the larger world, and reconciling your parent’s ambitions for your identity with your own ideas of who you should be. At times, this really works- it’s awesome to see this greater world of fjords and pods of leviathans, these rookeries of dragons (evocative of Avatar). And the characterization is great- neither Hiccup nor Stoick are being unreasonable as they talk out their disagreement about how Berk should respond to foreign dangers. At other times the script falters on this  dualism, lacking a sound pacing, with the transitions between the scenes abrupt and uneven. 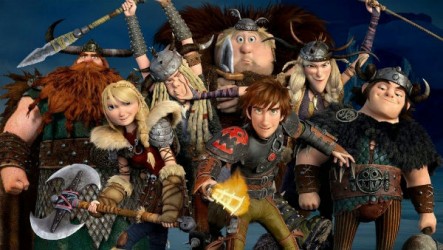 We come from the land of the rendered snow, of the Dreamworks lab where the pixels glow!

But Does It Have ‘Splosions? HTTYD 2 is more than abundant on quality action, well-stocked with pathos, and comes up short in the humor department. Children’s cinema prospers and flops on the basis of the film’s ability to engage the child’s imagination within an enjoyable fantasy. I argued that a part of the failure of Monsters University and Planes is that those films provided no sufficiently childlike characters, roles that could act as audience proxies to draw the children into the world of the movie. The How to Train Your Dragon franchise offers the fantasy of having a pet dog who’s humongous enough to ride and who can fly you anywhere. For those of Generation Y, do you remember The Neverending Story? Do you remember the part where Sebastien’s flying on the back of Falkor the Luck Dragon, and it’s completely kick-ass? Imagine that sequence extended threefold. Now add some well choreographed dragon dogfights. And then have a battle scene turning point that is an amphibious assault/siege on the Dragon rookery by the Dragon slavers? It’s clever, stirring, multi-dimensional, and thoroughly engaging action choreography. 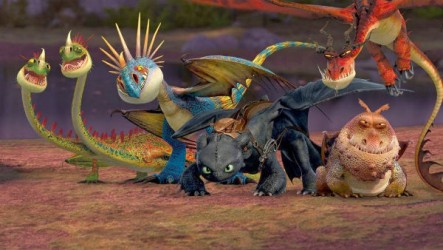 I’m about to spoil this film, so here are some pictures of dragons.

WARNING – YOU ARE NOW ENTERING SPOILERLAND 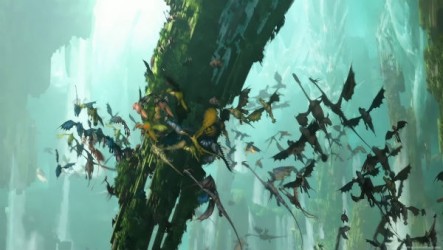 Here’s a picture of more dragons. Did I mention that spoilers are below?

Demerits: (1) The villain is a swarthy Rastafarian with a hook nose, fighting a bunch of Nordic Vikings. Not cool, Dreamworks, not cool. Also he is under-developed as an antagonist- he relies on brute force, he never does anything that’s noteworthy in cleverness or cruelty, and his chain smoker voice spouts no memorable lines. Drago Bloodfist is a bland baddie.

(2) This film comes dangerously close to overuse of baby dragons. I’m glad that they are only used to get to the final fight, rather than entered into the final fight, otherwise we’d be having a ‘Ewoks fighting the Empire’ moment. Also, why does the alpha abandon the baby dragons at the rookery? Do dragons have no parental instincts?

(3) The climax is weaker than the midpoint battle. The midpoint battle is a terrific scene- a combined air/land/sea battle with pirates fighting vikings fighting dragons of all sizes, with a genius conceit of having little dragons fighting above, under, and around the larger dragons. It’s too good. And so after Hiccup and his friends are defeated and scattered, the build to the ending of the film feels rushed by comparison. For a moment, I was really excited, as it seemed like the film was heading for an Empire Strikes Back style dark ending- Hiccup and Toothless separated, Stoick dead, Drago having conquered Berk and literally placing it under his iron fist (he has a prosthetic arm). Instead, we have a rushed conclusion that leaves little open and doesn’t really give Hiccup enough time to truly show his maturation, or his cleverness. 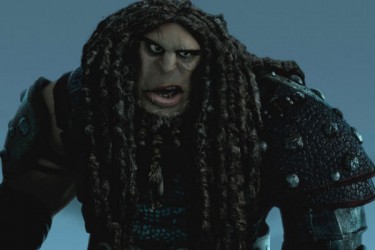 Acceptable Idiocies: I actually get Bloodfist just leaving Hiccup after killing Stoick and the alpha ice dragon. To Drago’s thinking, he’s just gained control of the dragons and killed the Jarl of Berk, and that’s what matters. The survival of the heir and a few teenage dragon riders is irrelevant,  if he’s enslaved the adult dragons. Plus, Drago never comes across as a villain of any real intelligence.

Way to Kill the Other Parent: The cliche in children’s films is that you get pathos by killing the mom, as the maternal bond is usually the stronger of the parent-child bonds. And since Hiccup’s mother Valka (Cate Blanchett) is introduced in this film, and since Stoick seems a comic figure, you’re set up to expect that Valka’s the one that will die. So not only is Stoick’s death a surprise against the tropes of the genre, it is also a reiteration of the older path of the Hero’s Journey.

In terms of Joseph Campbell and anthropology, How to Train Your Dragon I was the  journey of Hiccup the Seasick Viking from being a fool to being a hero. HTTYD 2 is the journey of Hiccup from hero to king. He starts out with a downright superheroic set of gadgets and skills: flaming sword, pet dragon, wing glider suit, steampunk swiss-army-knife prosthetic foot- but with an immaturely idealistic mindset, and being unwilling to stay in his hometown. The film resolves the father/son conflict by having a succession, rather than a rebellion- Stoick’s death shows Hiccup the true dangers of the world, and allows him to return to Berk to take Stoick’s death. In the terms of that journey, it’s more important for the father to die- a Stoick’s death is heroic, noble, and fully deserving of a Viking funeral.

What I like about this progression, which is undercut by the rushed conclusion, is that this film doesn’t fall into easy answers. Hiccup  wants to be an explorer and a diplomat; his father Stoick wants  Hiccup to be a protective and isolationist chief; his mother Valka wants Hiccup to be a park warden and conservator for endangered dragons. Hiccup ends the film neither wholly embracing nor rejecting these three different paths, instead choosing to become his own self by achieving a synthesis of the three. He will be the Chieftain of Berk, but he will pursue outside contact with the greater world; and he will be a protector of dragon kind, but by teaching all humanity of how to co-exist  and tolerate dragons. It’s a great message  about self-discovery and I only wish the franchise directors had been willing to truly develop this through the course of two films rather than compressing it into a hurried single film. As wary as I am about sequel bloat, How to Train Your Dragon 2 is very good, and it just narrowly missed being absolutely great.