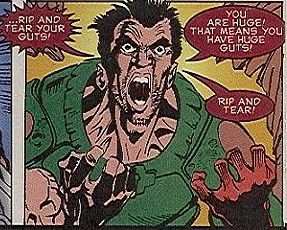 Within the first minute of DOOM (a game which, like MORTAL KOMBAT, refers to itself in ALL CAPS, and who are we to argue?), you have freed yourself from the chains bolting you to a sarcophagus which was recovered from the depths of Hell. Then, at the behest of an ominous voice which probably doesn’t have your best interests at heart, you are given your mission: “RIP AND TEAR UNTIL IT IS DONE.” 15 seconds later, you’re headshotting a room full of monsters.

DOOM is a fantastic game, yes. It also happens to double as playable heavy metal. id software’s latest is a sort of interactive concept album about a badass player avatar so righteous, he pushed Hell’s shit in so deep that Hell had to lock him in a box and put a big ol’ “DO NOT OPEN” warning on it. Said box remained closed until a Martian conglomerate-slash-death-cult so malignant it makes Weyland-Yutani look like an upstanding corporate citizen came along and unearthed (un-mars’d?) him whiletrying to harness the power of fuckin’ Hell (which they actually know and acknowledge tobe Hell)as a renewable resource.

This is the actual plot line of DOOM 2016, and it’s the greatest story ever told by a first person shooter.

[youtube https://www.youtube.com/watch?v=RO90omga8D4&w=560&h=315]
As to DOOM’s relation to the other games? Well, in the land of DOOM 2016, Doom ’93, Doom 64, & maybeDoom 2 are canon. Or, it’s implied. One of the most adept bits of business to be found in DOOM is its approach at rebooting the granddaddy of all shoot mans. The narrative has been engineered not to infringe on anyone’s particular nostalgia (or lack thereof) for the franchise. That means kids who grew up on linear corridor shooters get a brutal education by way ofthe “DOOM WALKER,” unstoppable force of vengeance who walks between dimensions on an eternal murder quest. Meanwhile, us old timers can gleefully incorporate Doom 64’s ending of “DOOMGUY REMAINS IN HELL BY CHOICE TO MAKE GODDAMN SURE IT BEHAVES ITSELF” as head canon without breaking the 2016 game’s plot. It works for everyone, even people who really liked Doom 3 (it was a retelling of Doom ’93, more or less, so just stick it in its place).

But enough of the story. You, if you have anything approaching sense,care about story in first person shooters about as much as Doomguy. That is to say, you don’t. Doom co-creator John Carmack famously — and correctly — quipped, “Story in a game is like a story in a porn movie. It’s expected to be there, but it’s not that important.” So it is that in DOOM, your avatar wakes up from all of 15 seconds of exposition to just start shooting the goddamn place up. And when a character tries to tell Doomguy what’s happening via video comm, he gets about ten words out before Doomguy punches the fuckin’ monitor off the wall.

This is the way in which Doomguy interacts with the world. He punches shit, up to and including the poor little drones which grant him boosts during his adventure. He also shoots shit, early and often, with a money selection of fully-upgradable firearms. Because punching shit to death refills health, andchainsawingshit to death refills ammo, the player will find himself in what amounts to an increasingly precarious ballet of death and strategy, chunks and tactics. DOOM’s environments meld best-in-class space horror art assets with a fantastic sense of level design, allowing a level of verticality missing from many of today’s shooters (and even its predecessors). Wolfenstein developer Machinegames is listed as a consultant, and their influence shows: Levels are packed with secrets, bonuses, and upgrades. Each stage has optional challenges, encouraging players to experiment with new and exciting ways to kill things dead. And for the truly meticulous player, each area contains an unlock for a classic Doom level, in which monsters and weapons from the new game are rendered in 3D-ized pixelated recreations of the old battlegrounds.

And while DOOM demands the player always be moving & adapting, its flawless controls and ultra-fast movement speed empower the player to react appropriately to the constant barrage of threats, making crucial decisions moment-to-moment as to whether the punch, the chainsaw, or the shotgun will yieldthe most prudent result. Tycho at Penny Arcade likened DOOM’s core systems and feedback loop to a sort of mash-up between BULLETSTORM (again, all caps) and Tony Hawk’s Pro Skater. He’s not wrong, and you’re not wrong if you’re thinking that this isfantastic, rarified companyto be placed adjacent to.

To be blunt, DOOM is the current frontrunner for Game of the Year 2016, and there’s only a handful of titles coming down the pipe that have any prayer of unseating it. We’re lucky if we get a shooter this revelatory once in a generation. It’s the kind of game one repurchases an old console 15 years down the line to get another crack at, and considers it money well spent. As John the Baptist is traditionally thought to have paved the way for Christ, the recent outstanding Wolfenstein titles (another id/Bethesda property) can be considered the harbingers of this, the alpha, the omega, the messiah of a genre in desperate need of one, and perhaps the savior of an entire medium which has become far too myopic and precious in recent years: As the game industry loves itself some trends, if DOOM does even half as well as it deserves, we may well be in for the greatest crop of first person shooters seen in modern history.

The king of kings is back. Bend the knee. Rip and fuckin’ tear.