My bloodshot eyes are shifty. My head is on a swivel as I watch my P’s and Q’s, walking on eggshells along the straight and narrow. I used to be the new kid, the sexy up-and-comer bringing flash and pizzaz to an already stellar Ruthless roster. They even voted me Most Handsome And Popular Gambling Columnist of 2017! [citation needed]

But alas, no more. The bloom is off the rose, apparently. Depending on your familiarity with younger social groups that simultaneously confuse and enrage me (on account of the youth and all) my boss either subcolumned or fired subliminals at me in his Christmas Story 2 review! That can’t be good. So no more horsing around! I gotta grow up, cut the chatter, and make with the picks, so here we go! 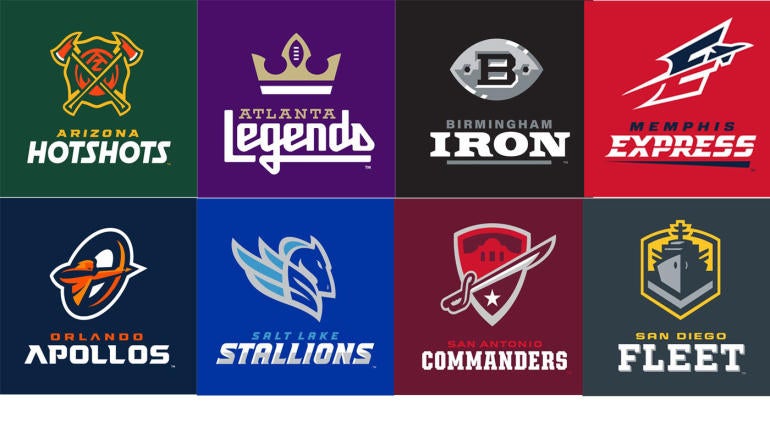 Yes, they are really doing this. February 9, 2019, six days after Super Bowl LIII, marks the debut of one of the two minor leagues born out of a 30 for 30 documentary that led to two lifelong friends trying to fuck each other out of the allegedly lucrative market of spring football. Hopefully nobody tells Vince McMahon or the Ebersols that the people screaming about proper anthem conduct have moved on to Dinar revaluation or gout-taunting diets or what have you. Not that those people really mean what they say anyway.

So sports gambling icon Rick Neuheisel will bring his Arizona Hotshots to Rice-Eccles Stadium to take on the Salt Lake Stallions 69 days from now, theoretically in front of 45,017 screaming fans. Nice. They’re actually lucky in that regard, as the San Diego Meth Chefs and the San Antonio Non-Raiders need to find over 70,000 people with nothing better to do on five separate occasions over the course of the season, after which playoffs and championship dates TBA. Boy does that inspire confidence.

The Hotshots will be led by QB Trevor Knight, the guy who flexed to Texas A&M after Baker Mayfield showed up in Oklahoma. He bounced out of the NFL after refusing to convert to wideout or DB, even though he ran a 4.5 40 and his own Wikipedia page says that his passing drills were described as mediocre and mildly inconsistent. Knight will be up against Josh Woodrum of the somehow-accredited Liberty University, who was hired and fired by seven different practice squads after going undrafted in 2016. I think the edge has to go to Arizona here. The name will take some getting used to – its actually a well-meaning tribute to elite-level firefighters – but I think their blindingly hideous uniforms will serve to distract Lord Hyeamang, DeMornay Pierson-El, and every other Salt Lake player whose name is misspelled on the team website. The Stallions may also have to contend with Blag Dahlia types who hold out of training camp due to reservations about their new place of residence.

In all seriousness, God bless them. If 400 guys get to chase their dream and/or make a living for a little while, that’s awesome. Charlie Ebersol is a child of extreme privilege, Vince McMahon is a less-than-stellar human being to say the least, and it would be preferable if this whole thing hadn’t germinated out of Individual 1s habit of using thinly-veiled racism to score points with the hillbillies that continue to validate him, but it would have been preferable if Washington State didn’t have to play in a Goddamn blizzard last Friday, too. I watch the absolute dregs of FCS and HBCU conferences if given the time and opportunity, and I’ll probably watch this as well. If the books put odds on it, maybe Goat will let me hang around after the Super Bowl!

That said, I would’nt go buying a Kandinsky-esque jersey just yet. Someone tries to do this every couple of years, albeit with considerably less money behind it. Hell, as someone who maybe, possibly, might have, over the course of my adult life, purchased tickets to all of six Brooklyn Cyclones short-A minor league baseball games, I was inundated with roughly 2000 letters and emails from their team office offering discounted FXFL tickets in 2014 and 2015.

But between our developing understanding of CTE and the general national malaise, Im not 100% certain that people are in the mood for more football right now. Regarding the AAF specifically, all but one of the teams are located in the American south. Are they really going to get people in San Antonio to pay for live games instead of watching the Spurs for free? Birmingham is the only city without another major sports team, but are there really 71,594 people willing to spend discretionary income to come out to Legion Field in February?

Then again, the XFL has this terrible nonsensical music video. I’m sure everything will work out just fine. HEY LOOK (REAL) FOOTBALL! Okay, fine. Just what sort of self-flagellation is necessary here? I completely underestimated Andrew Luck in the preseason, figuring his shoulder or his will would give out before the leaves fell, and now here he is, threatening the limping Texans in the AFC South and on the precipice of ruining my deaths-door preseason prop bet on less than seven wins.

It’s not just Luck of course, nor is it just luck (yep, sorry). Eric Ebron has become as crucial to the offense as T.Y. Hilton and they’ve got really good special teams. Adam Vinatieri has always been solid, kicking the game winner last week, but that win was cemented when Frank Reich had him short the ensuing kickoff in order to pin Miami too deep to mount a final drive. Special teams are necessarily limited by what they are, but coupled with smart coaching it makes an appreciable difference. Maybe Mike McCarthy should have taken notes.

I’m not totally sold on the Colts overall, of course. But the Jags are literally in disarray right now. Bulb Bickles gets the pine this week after a three-point loss to the Bills at home, so Cody Kessler will start, but they also fired and replaced their OC and Leonard Fournette is suspended. Is it bad mojo to root against my own prop bet? Are there so many question marks in Jacksonville that this somehow becomes a trap game? Were about to find out, but I’m comfortable enough to go heavy laying the Colts. 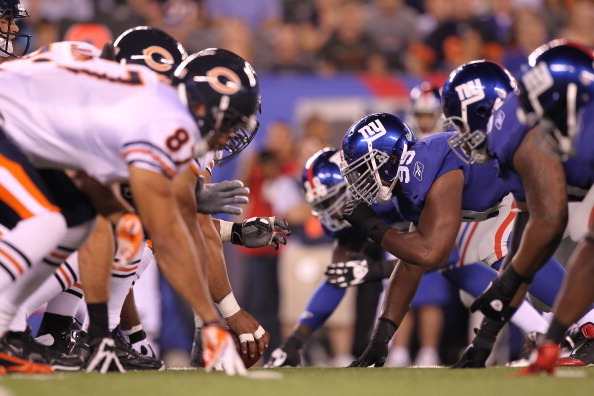 Speaking of backup quarterbacks, Chase Daniel surprised a lot of people last week, but thankfully we weren’t among them. The Chicago defense endorsed him ahead of time and he legitimately looked like a calming veteran presence in leading the Bears to a comfortable win last Thursday afternoon. Granted, it was over the Lions, but we still got paid, so atta boy Chase.

Conversely, the Giants offensive line damn near let Eli get killed last Sunday, as he was hurried a lot and sacked thrice for a loss of 22 en route to a road loss against the Eagles, a divisional rival. Not only did they blow a 16-point lead, but the defeat puts them at 3-8 and essentially out of contention.

Will that situation motivate a rebound? Should a QB with a 49 QBR and more than twice as many picks than wins be excited about facing a Vic Fangio defense currently leading the NFL in both picks and forced fumbles? Are rhetorical questions designed to prove a point an irritating way to format a paragraph? Of course not. Here is my non-apology, and a handful of my money. One or more units on the Bears, please. 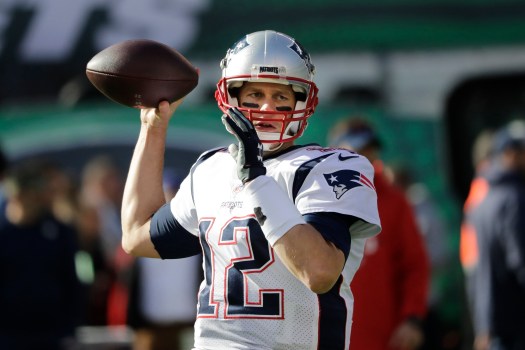 New England was the other squad that came through for us last weekend, and it only cost me one frying pan shot to the head. Those were always hilarious when we all saw them on Superstation Funtime, but the wife buys that top-shelf All-Clad stuff. My ears are still ringing, but at least we collected.

This line actually dipped from -7.5 since Tuesday, presumably due to the Vikings win over Green Bay on Sunday Night Football. However, as alluded to earlier, some of that win belongs to Mike McCarthy, who among other things punted on fourth-and-four from the Minnesota 41 right before halftime.

Forget the Pats weird loss to the Titans back on November 11. They’re still 7-1 since mid-September. Tom Brady still has his 1.7% INT rate and circa-100 QBR, and a home game against a team with five DB’s listed as either out or questionable. Wait and see if the line drops another hook and lay the evil empire. 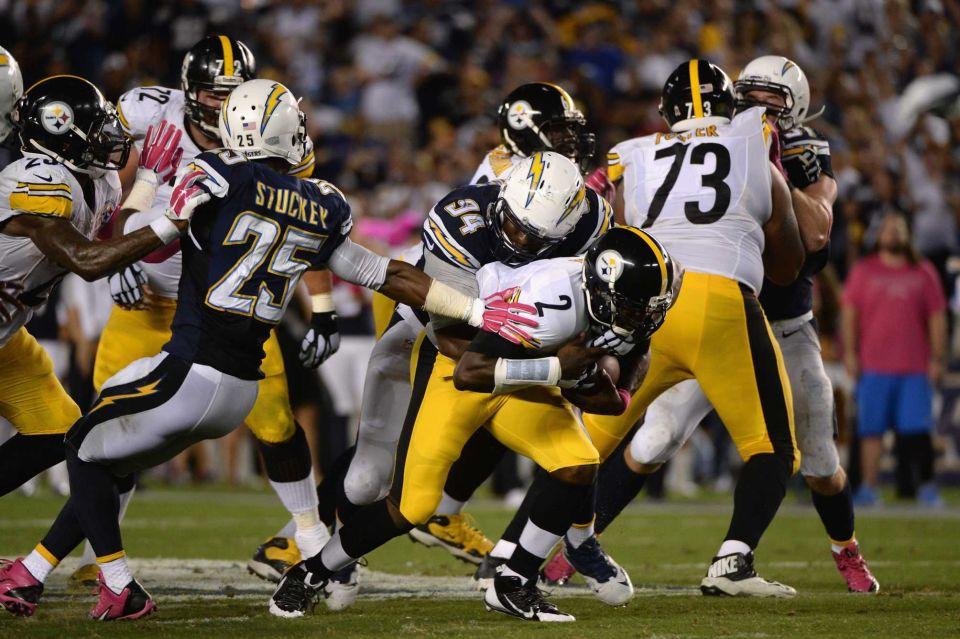 Last Sunday, Philip Rivers threw 25 consecutive completed passes, setting an all-time record for a single game. The one incompletion that ended the streak was the only one he threw all day, going 28 for 29 for 259 yards and a 97% completion rate. At that point he just sat down, having already amassed a 42-10 lead. That’s not particularly relevant for this game, but I’m building an argument here.

Both of these teams are hot enough that they’ve got something to play for even in non-divisionals, as both teams are in the hunt for a first-round playoff bye. In situations like that, involving two elite teams, some tend to look for home field advantage, especially once the seasons change enough to maybe make a difference. If that was the defining metric, I’d give the nod to Pittsburgh, as they average 35 points at Heinz Field, 12 more than they score on the road. AND YET!

The Steelers just killed us with a stupid loss to the Broncos. Ben Roethlisberger and Antonio Brown, while still very good, have actually declined from a statistical standpoint since last year. And now for my closer: Marcus Gilbert and Joey Bosa. More specifically, the stats, Oddshark models, and Covers cons that tilt what should be a very close game in favor of the Steelers don’t account for Gilberts injury, which kept him out of November games, and the recent addition of Bosa, who only returned on November 18.

Look, this is going to be a tight game between two upper-echelon teams. It will probably come in under the total, but only as a result of good-to-great defense. I certainly wouldn’t empty your wallet here, but anything over a field goal in a game this close is a line worth taking. They flexed it to Sunday night, so were gonna watch anyway, right?

Lets do it, gang. Were still above .500 and were due. I didn’t have the heart to go into the fucking Kareem Hunt video but it was incredibly disheartening in light of last years columns wherein he was postulated as the good guy in comparison to other proven bastards in the league. I suppose I was projecting back then, but I refuse to apologize for wanting to see the best in people, even when it turns out that they don’t warrant it. I guess Kareem Hunt didn’t deserve that kind of respect, but as far as I’m concerned the rest of you still do.