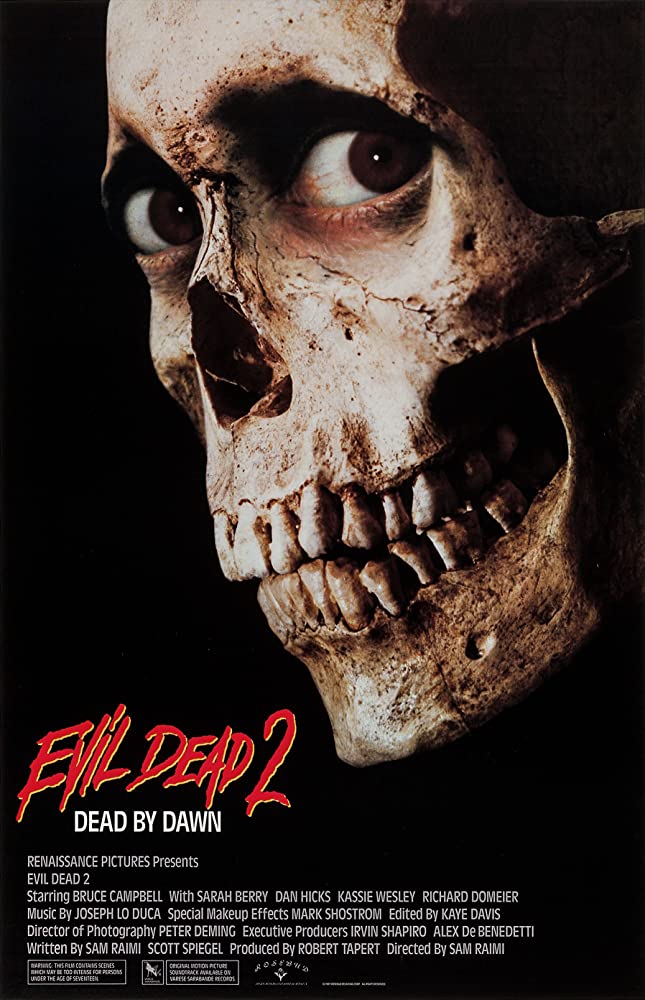 A continuation of The Evil Dead, where Ash tries to survive in a cabin possessed with evil.

Fair Value of Evil Dead 2: $6.00. It’s one of the classics of 80s horror comedy, not as memorable as it’s sequel, but a live action Warner Brothers cartoon of zombie slapstick.

The Bruce Campbell Show: It’s all on the comic chops of the lead, Bruce Campbell. He mugs and chews scenery like few other before or since. Every line is over-sold, every expression is a caricature. It’s a masterclass in physical comedy.

Plot Summary: Evil is unleashed by playing a recording of spells in the Necronomicon. The Evil possesses and animates the Dead, making them Evil Dead. 2. It’s a demi-sequel, in that it partly plays through the events of the first Evil Dead, before veering off in different directions.

Groovy What makes Evil Dead 2 distinct is the madcap mania that director Sam Raimi infuses into the action. Both the Evil and Ash (Bruce Campbell) are at turns clownish, insane, gibbering, and giggling. It’s in the frenzied pace of the chase sequences, the gleeful physical violence of both parties, the Claymation of the special effects.

Entertainment Logic: Evil Dead 2 doesn’t follow an interior logic, but purely an entertainment logic- a slalom from one bizarre concept to the next. At one point, the evil is dispelled by daylight; but then, the daylight rolls by with accelerated speed. The whole film has a loud-quiet-loud tempo. It’s just a sugar rush of spooks. Likewise, the film plays fast and loose with geography and time in order to get to the gags that Raimi wants us to see. It’s the most spacious tiny cabin in the woods ever!

The Midnight Movie Canon: In all, this film is a solid choice for those craving something cheesy and silly. It’s combining hyper-macho 80s action tropes with over the top zombie violence. A light and fun film.