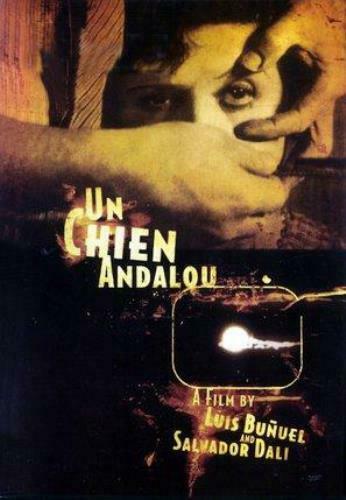 This 1929 collaboration between Luis Bunuel and Salvador Dali is one of the strangest and most enigmatic films ever produced, containing all the layers of dream logic and elusive profundity of a David Lynch movie in under twenty minutes. The two notorious surrealists apparently couldn’t have been happier that their work confounded so many viewers at the time of its release, and it continues to do so today. According to Bunuel himself, “NOTHING, in the film, SYMBOLIZES ANYTHING.” If one breaks this sentence down: “NOTHING â¦ SYMBOLIZES ANYTHING,” the truth of the film is revealed: the images, which consciously represent NOTHING coherent or rational, can SYMBOLIZE ANYTHING to any individual viewer. Therefore, the following is one viewer’s interpretation, supplemented by the ideas of a few others, in an attempt to find a logical narrative thread in a film whose stated purpose is to have none.

The film’s structure, even from the very opening title, is misleading and disorientating. Un Chien Andalou, which literally translates as An Andalusian Dog, takes place in Paris and contains no dog, nor even mentions one outside the title. This title and the opening scene quickly shatter any expectations the audience might have.

Upon repeat viewings, one begins to see that this entire film represents a dream in the mind of a real-life, modern-day Oedipus, as embodied by the film’s protagonist (Pierre Batcheff). After the inter-title: “Once upon a time,” we see a man, played by Bunuel, whetting his straight-razor. This man is the protagonist’s father. What follows is one of the most horrifying images in cinematic history. As the protagonist’s father holds the razor up to the eye of the protagonist’s mother (Simonne Mareuil), he looks to the moon to see a thin cloud slicing across its surface. Just as the audience is seemingly spared the gruesomeness of the actual event by this visual metaphor, the razor slices the eye (actually a donkey’s) in close-up, spilling its jelly-like contents. This symbolizes the father’s extraction from the mother of the truth about her and her son, which we see as the film progresses.

The following inter-title, “Eight years later,” shows the out-of-control nature of time within the protagonist’s dream. We are introduced to him as an overgrown child in a man’s body, riding his bicycle down the street with a striped box tied around his neck. The film slowly dissolves from a shot of the city streets to the protagonist riding and back again. This indicates a lapse in time, showing that he has traveled a long way, but it also has a wonderfully disorienting effect. Time and space are not to be trusted in a dream.

When the protagonist falls off his bike, dropping his striped box, the innocence of his childhood is symbolically lost. His mother runs to his aid and brings him upstairs, where she lays out the contents of the box: his childhood school clothes. She sits looking at them, symbolically reminiscing about her son as an innocent child. Her reverie is destroyed when she sees her son in the corner, staring at his hand; a close-up reveals ants crawling out of the palm. A common visual metaphor in Dali’s paintings, this signifies that she has caught her son masturbating; the shock on her face upon seeing the ants echoes his shame at the discovery.

The mother’s armpit, as seen by the protagonist, is a metaphor for her pubis. The protagonist develops a sexual fixation on this. The subsequent dissolve to a sea urchin foreshadows the film’s ending, which takes place on a beach; the overriding emotion of this ending is a tragic sense of loss. By dissolving from a sexual image to one that evokes this, the film shows the protagonist’s underlying fear of sex, a theme that was very prevalent in the life and work of both Dali and Bunuel.

When the protagonist begins to sexually assault his mother, she resists at first, then gradually gives in, showing the aggressive-submissive nature of human sexual relationships in general. When he does begin to caress her breasts, he visualizes buttocks, signifying the elements of fantasy and displacement in human sexuality, as well as possibly hinting again at homosexual desires within the protagonist (it is impossible to tell whether the buttocks are male or female). As he does this, his eyes roll back in his head, symbolizing both the blindness aspect of the Oedipal myth and the more modern myth that masturbation causes blindness. The opening eye-slicing sequence can be seen as foreshadowing of this, and the motif is repeated in the blindness of the dead donkeys seen at this point.

The additional symbolism of the donkeys is not immediately apparent, even to the filmmakers, for whom they represent a shared image dating back to their individual childhood discoveries of rotting donkey carcasses, according to French writer Georges Bataille in an essay found in his book Visions of Excess. But despite this mutual obsession and the supposed lack of symbolism in the film, the religious metaphor of this sequence is pretty obvious: the protagonist is dragging two tablets (the Ten Commandments) which are tied to two priests (the arbiters of religion), which are in turn tied to two Grand pianos with dead and blinded donkeys on them. As the protagonist struggles to reach his mother and satisfy his Oedipal desires, he is burdened by Christian morality, exemplified by the tablets and the priests, and even more so by traditional culture and classical civilization, exemplified by the pianos. The “decomposing ass-cadavers,” as Bataille dubbed them, show how the filmmakers feel about these kinds of values.

When the protagonist’s father hands him the book and pen, the protagonist shows a child’s aversion to the first day of school, but these objects also symbolize knowledge. When they turn into guns in the protagonist’s hands, it can be inferred that they represent knowledge of the Oedipal prophecy, which facilitates its fulfillment. This is an inversion of the original story, in which it is Oedipus’s ignorance that brings about the prophecy’s fulfillment.

When the protagonist shoots his father, the father falls out of the scene and into a field, collapsing against the back of a nude woman. This woman represents the wife he has lost to his own son, his dying realization. When the men in the field find his body, we are witness to perhaps the only literal scene in the film: this is the protagonist’s dreaming remembrance of the discovery of his crime. It is uncertain how or why this murder actually came about, but the relatively realistic nature of the scene, coupled with the fact that we never see the men in the field before or after this, leads one to believe that it is at least an interpretation of a real-life episode.

Immediately following this, the protagonist appears as a specter of murder and incest before his mother. As he materializes out of thin air, she is staring at a “death’s head” moth, symbolizing the transformation she is going through as a result of her sexual encounter with her son. The specter appears to know what she is contemplating, and he covers his mouth with his hand, as if to say, “Tell no one.” When he removes his hand, his mouth has disappeared as well, emphasizing the point. She defies him by putting on lipstick, as if to say, “I’ll tell who I please.” He then reminds her of the incestuous incident by growing her armpit hair where his mouth was, symbolic of cunnilingus. She is shocked and runs out of the house; the childish defiance of sticking her tongue out at him shows that this is still his dream, probably based on a real-life confrontation between himself and his mother.

When the protagonist’s mother seduces the young man on the beach, we see the transformation already hinted at by the moth: because of her sexual encounter with her son, she now seeks a surrogate for him in the form of this boyish youth. Like the protagonist, this youth seems both shy and aggressive, as seen by his reticent manner when she first approaches him, followed by a shot in which he shows her the time on his watch (another Dali obsession) his fist close to her face as though he is striking her. She gently puts his hand down and finally manages to hook him with a kiss, then they walk along the beach together. They find the protagonist’s childhood clothes and the youth throws them into the sea. Thus, the very last vestiges of the protagonist’s innocence are gone, destroyed by his own surrogate, a direct result of his own sin.

The inter-title, “In spring,” like all the inter-titles, defies audience expectations: instead of the traditionally lively images of spring we’ve come to expect, we see the protagonist’s mother and the youth standing together, buried in sand past their waists and apparently dead. After casting off childish things, the inevitable stagnation and death of romantic love sets in. The positioning of these two figures is strongly reminiscent of Jean-Francois Millet’s 1857-59 painting, The Angelus, a strong influence on Dali, who was obsessed with the painting for a number of years, referencing it in no less than seven of his own paintings between the years 1932-35. Dali believed the painting had undertones of sexual tension and paternal homicide, again pointing to the Oedipal myth.

It is rumored that the youth on the beach is played by Dali himself and, based on photographs of Dali from this period, this supposition is entirely likely, as well as appropriate, since much of the imagery in the film comes from Dali’s own conscious and subconscious obsessions. In fact, the assertion that Un Chien Andalou‘s intention is not to make any narrative sense seems to be Bunuel’s idea more than Dali’s, if not a hoax altogether. It is entirely possible that Dali, whether consciously or not, imposed a rather well-constructed Freudian storyline upon the clay of the film’s scenario. From the very beginning of his association with the Surrealists, Dali was always destined to go in his own direction. Whatever the case, Un Chien Andalou stands as a testament to Surrealist art at its finest, and remains today, almost a century later, one of the most fascinating films ever made.