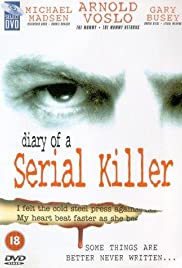 Diary Of A Serial Killer

Right from the opening frame of the 1998 straight-to-video thriller Diary of a Serial Killer (aka Rough Draft), it is obviously a cheesy affair. The score, with its heavy saxophone wailing and bombastic drum-machine track, feels more like something from the 80s than the late 90s, and the rest of the movie feels the same way. Our protagonist, Nelson Keece (Gary Busey) is introduced dressed in drag that is, while certainly not convincing, enough to render the distinctive-looking actor practically unrecognizable. In fact, he actually seems to be enjoying these early scenes more than the rest of the movie, and it almost makes you wonder if maybe he chose this project out of bitterness that he wasn’t included in the cast of To Wong Foo, Thanks for Everything! Julie Newmar, alongside his Point Break co-star Patrick Swayze (and his Drop Zone co-star Wesley Snipes).

Anyway, Keece is a journalist of the type that might be dubbed a Method Writer, going undercover in various unusual lifestyles in order to write in-depth, award-winning pieces on them, and his latest work is about the lives of transvestites in nightclubs. We learn all this via a lot of extremely expository dialogue in cinema’s most lethargic argument between Keece and his girlfriend, Juliette (Julia Campbell), and (much more hilariously) in a scene in which he, still dressed in partial drag from the night’s outing, types “THROUGH THE EYES OF A TRANSVESTITE” into his word processor, followed by “by NELSON KEECE,” because everyone knows that’s how a real writer begins typing a piece. It’s as essential as starting a rap verse by stating your name and what you came to say.

We eventually see some more of Keece’s supposedly award-winning past titles, such as “THROUGH THE EYES OF AN ALCOHOLIC,” and “THROUGH THE EYES OF A STREET BUM.” Keece shows his sensitivity to his subjects by bristling when Juliette refers to his most recent ones as “drunks”, but apparently he felt “street bum” was perfectly respectful. Also, in regards to Keece’s relationship with Juliette, it should be noted that there is a Gary Busey sex-face early on in this movie, and that is something you can never unsee. Every time you close your eyes, it’ll be there, as if tattooed on the insides of your eyelids, for the rest of your natural life. Michael Madsen is a cop named Haynes whose main purpose in the story is to deliver more expository dialogue (he hates murderers because his daughter was murdered by one, you see) and to suspect Keece himself of the murder based on some pretty flimsy evidence, but more on that later. Haynes is introduced with a cigarette in his mouth, barking orders, so his dialogue seems like bad ADR work even when it’s not, and there’s a running gag introduced later about he and his partner, Laroue (Reno Wilson), enjoying doughnuts (because they’re cops, get it?). Just one of many ways in which this movie eschews cliche at every turn.

On the way to a picnic where he is supposed to meet Juliette’s parents, Keece recognizes a man who hit on him at the transvestite nightclub at the beginning of the movie and decides to follow him. This is the beginning of the first murder sequence, and it could scarcely be more ridiculously staged if it were meant to be funny. Keece begins following the killer, Stefan (Arnold Vosloo), and his eventual victim in the broad daylight of an early afternoon, and by the time they get to the alley where the murder ultimately takes place, it’s full dark with the moon high in the sky. Despite the dialogue making it clear that Stefan just met this woman, they apparently walked together for several hours before a sudden rain shower drove them into the alley for shelter. Keece carefully places a tape recorder near them while they stand facing each other in profile and, through the miracle of tight framing, we’re expected to believe that neither of them notices him in their peripheral vision. Then, immediately after Stefan stabs the woman to death, Keece retrieves the tape recorder and slowly lumbers away while Stefan watches him, making no effort whatsoever to stop him.

Unlike most serial killer movies, which would probably waste time on some kind of subtle cat-and-mouse games at this point, this one just has Stefan smash through the window of the phone booth where Keece is attempting to reach the police, then drag him out and beat him up on the street until some random witnesses chase him off. Then, as Keece tries to get the attention of Madsen’s Detective Haynes back at the scene of the murder, Stefan magically reappears to lead Keece away at knifepoint. Haynes, being the veteran homicide detective he is, gets momentarily distracted by an officer asking him to sign something and loses track of Keece forever.

This is just the beginning of Stefan’s magical appearing abilities, though, as he pops up early and often, whenever Keece is attempting to inform police of what he has witnessed. Between these absurd contrivances and the apparent inability of anyone but Keece to even notice Stefan’s existence, it soon becomes easy to suspect that maybe there’s a Fight Club-style twist in the works here, and that maybe Keece and Stefan are one and the same. To the movie’s credit, it avoids this conclusion, which would be a cheat for numerous reasons as the narrative continues. To its discredit, the conclusion it reaches instead is far more hackneyed and less ambitious.

The second onscreen murder is just as comically unlikely and abusive of coherent spatial logic as the first, as both Keece and the cashier at the bookstore where the murder occurs take forever to navigate the shelves, even as the sounds of a particularly noisy murder reverberate throughout the store. The cashier looks up with roughly the same level of alarm after several loud, high-pitched screams as she did at the initial slightly raised voice of the victim when Stefan touches her hair.

Keece finally arrives just after the murder has been completed and Stefan has miraculously disappeared. Keece looks a little glum as he surveys the body, the type of expression someone might wear upon being informed that there are no more of their favorite bagels left, then leaves just before the cashier finally arrives on the scene. It’s almost as if the movie is just making itself up as it goes along, and this is the moment where it decides, “Hey, maybe he actually is the killer…”

Meanwhile, Detectives Haynes and Laroue are hard at work on the case, with Haynes acting as his own sketch artist. This is clearly his greatest strength as a policeman, as he manages to whip up a pretty perfect sketch of Busey’s face based solely on Laroue’s description of Keece as “tall, fair complexion, about 180-200 pounds.” It’s at this point that Haynes introduces his theory that Keece is the killer, to which Laroue understandably asks, “If he’s the killer, why would he come here [to the police station]? And why would he have it on tape?” Haynes replies, “Lot of unanswered questions,” and proceeds under the assumption that Keece is, in fact, definitely the killer. Truly excellent detective work happening here!

The transvestite stuff from the beginning of the movie ultimately pays off (sort of) when Stefan forces Keece into being his accomplice in the murder of one of the cross-dressers Keece met in the opening sequence and, more absurdly, in Keece’s use of his own lady-clothes to evade police as he tries to prove his innocence. The sight of Gary Busey running through the streets in a dress is certainly some welcome physical comedy at this point, but it’s downright cruel how frequently this movie makes Busey run when he often sounds as though he’s struggling to breathe just sitting still. This cruelty is only topped by how ruthlessly the movie wastes Michael Madsen’s talents on an ultimately pointless character, and the way it ultimately goes with the lamest “The End?” conclusion possible before reprising the anachronistic sax-pop over its end credits.

Ultimately, this is a compulsively watchable bad movie that could have benefitted from just going even more over the top in every way. Except for the Gary Busey sex-faces. One of those was more than enough.