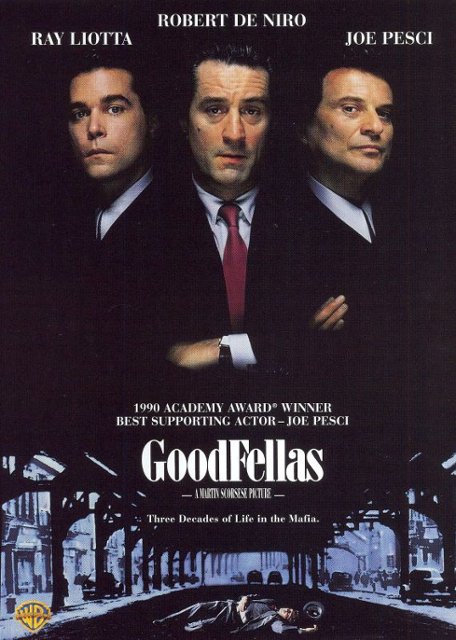 The Godfather of all gangster movies

I recently watched Goodfellas for the third…and final time, not because I intend to retire to eremitism, join a cult or end my life soon, but—to see how it held up. Seeing it first in 2004 while a twenty-year-old, English-as-a-second language twit enamored with mob flicks centered around New Yawk, big-city, third-world, streetwise culture; and, for the second time in 2006, it left no significant margin for developing an understanding to form an objective appreciation.

The film read…and still reads…like a lament for times gone for its criminals (and the progressively evolving soundtrack listing suggests the onward path of change elsewhere as well, eg., RICO) but suddenly now, as a diorama of a marriage, on top. Rather, how an inconspicuous codependent relationship occupied center stage in a world about anything but matrimonial harmony. There is the courtship, the wedding, the goomahs, then the intervention and side hustle (each staged at the apartment of one of Henry’s goomah du jour’s of all places), and finally the wit-sec interview. And Karen’s presence is felt in some capacity.

Revisiting cinema is something I subject films I held in some esteem to either because I couldn’t pick up all the idioms the first time experiencing them or if initial novelty preceded amassing the requisite life experiences and maturity to challenge or accept those works. For the most part almost all such titles hold up terrifically, with the only change in reception being minuscule and usually reserved to characterizations of acted parts, an indictment usually chalked up to actor interpretation and not the entire work. My only gripe, for example, here, is that the real Henry Hill was closer to an outfit sycophant than a protagonist of his own story of a life in the mob, although medium constraints justify the creative license.

From the outset, Scorsese’s expository blitz would necessitate an unconventional format featuring flashbacks, long takes, voiceovers, freeze frames and broken forth walls, all sure to garner nods from film history buffs. The use of such cinematic technique dazzles with the film’s energy and packed sequences if a comprehensive narrative were on the agenda to begin with.

A sprawling saga inspired by true events (Irish-Italian Lucchese associate turned FBI informant) is exactly one such case, with some scenes becoming snapshots in Scorsese’s expansive mosaic of time and crime. And it oozes attitude in the sense of craftsmanship and technical coherence between its ruthlessly efficient editing and constant narrative action. It is a rock and roll life playing out in a frenetic tempo and irregular stanzas that first serves as an advertisement to…then, a mockery of…outsiders while proving conducive to the paranoia of its finale.

Time contracts and expands, here, and at the opposite extreme of Scorsese’s portions of screen time per event is a true film highlight (the May 11, 1980 sequence), where a fateful day’s events are stretched to an elaborate melange of music, drug-addled frenzy and general mayhem. The opening scene, in particular, is an effective metaphor that is forgotten rather quickly thanks to a ferocious pace and Marty’s choice of winding back the clock on the events. The red tail lights beaming through the dust clouds dispersing over a freshly dug grave are exaggerated to evoke a hellish dreamscape that abruptly ends with the frame trained on Henry’s perturbed look. That intense rhythm is maintained despite the disparate range of perils, emotions and automobile model years to follow next.

At the heart of the film is an unusual protagonist which, while no mere cipher, is often powerless to outside forces. Elsewhere, Tommy was memorable for his combustible streak, Karen is atypical as a mob wife, while Jimmy and Paulie, the more senior figures, hold polarizing views on enterprising ways. Henry is impacted upon by all the above mostly without much genuine agency of his own. Goodfellas’ narrative unorthodoxy is evidenced in how Henry’s relationship with this quartet of supporting characters forms a composite protagonist from a passive, reactive character, which make the drama of navigating pitfalls compelling for the stakes involved instead of an identification with his persona or archetypical standing.

Chief among those bonds is the turbulent one shared with his better half, as for all the wise guy sloganeering about one’s friends, one’s honor and loyalty towards whom, there is a new bodybag still warm to remind you of its fallacious logic. Curiously enough, turning state’s witness and spousal privilege end up sparing Henry an outcome as grim or swift many of his ilk are condemned for. Plus, unlike his peers, there was quite a bit of advantage in involving a true ride-or-die bitch in that spousal privilege made the decision for them to turn state’s evidence. But the enablism of the couple’s relationship is undeniable in forcing the hands of fate.

Of course that is all played up by the fact that both Henry and Karen are group outsiders who break with tradition of keeping family willfully ignorant but if the real-life couple never did as in the film then who’s keeping track? Is Scorsese less of a director now because of a few minor inaccuracies? As a bottom-rung serf who bit off more that he could chew, was Henry Hill truly worthy of the principal role Scorsese was generous enough to allow him? I can say with certainty that in this art form dramatization trumps fact, and that Ray Liotta, never once landing something close to a leading role as iconic despite playing a character framed as such, is perhaps testament of when anomalous spreadsheet figures regress to the mean.

A tale of riches, gaudy and gauche, minus the glamour and grace, and all the grit to go along with the unsavory means of acquiring wealth was a shot in the arm of sorts for a genre yet to be weaned off the tragic figure of the Coppola-Puzo mafioso. In Scorsese and Pileggi’s mafia, there is a reason why diners become an expression of transience and brevity, why drinks are consumed standing up, stool-side and on the go, why movement remains constant for men in that line of work; they’re being hunted from within their ranks, too.

Demise is a reality that that underbelly is either oblivious to or willfully accepting of. Such are the lowered standards in the pursuit of a pittance and far less power wielded than in past romantic depictions, of the lonely perch at the top. And poor, old Henry was in one big hurry to throw himself back into that mayhem, anyway.