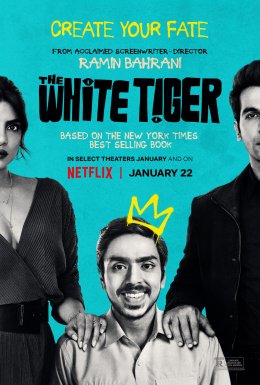 It is fitting that the first words heard in The White Tiger are spoken by Jay-Z. On the soundtrack as the movie begins is “Beware of the Boys,” Jay’s collaboration with British Indian rapper Panjabi MC, which nicely sets the tone for a crime story set in India in the first decade of the 21st century. More importantly, for anyone familiar with Jay’s life story as explicated throughout his body of work, it foreshadows the similarly compelling rags-to-riches story of the movie’s protagonist, Balram Halwai (Adarsh Gourav). Balram is of a low servant caste in Laxmangarh, a small, impoverished town in India, and when we first meet him, he can hardly imagine anything greater for himself than reliable employment as a servant to a wealthier family. As he later says, “These days, there are just two castes: men with big bellies, and men with small bellies. And there are only two destinies: eat, or get eaten up.”

There are, likewise, two major animal metaphors established early on and explored throughout the movie. The white tiger of the title refers to Balram, whose first teacher when he is a boy compares him to the animal, a creature born only “once every generation,” rare, special, beautiful, and deadly. The other metaphor is spoken by Balram himself, describing the humble rooster coop as “the greatest thing to come out of this country in its 10,000-year history.” When a rooster is slaughtered, he says in voice-over, the others in the coop “can see and smell the blood. They know they are next, yet they don’t rebel. They don’t try and get out of the coop.” The servant caste in which Balram exists is much the same, as it would not even occur to the average servant to try to deceive or betray his master. “The trustworthiness of servants is so strong,” Balram explains, “that you can put the key of emancipation in a man’s hand and he will throw it back at you with a curse.”

This is not due to an inherent honesty and spirituality found exclusively in Indian people, and not only due to centuries of ingrained servitude, but primarily because every servant knows that their hiring is contingent upon their masters knowing everything about the servant’s family. The concrete, sinister reality is an understanding that the wealthy, powerful masters can put a servant’s entire family to violent death if a master is betrayed. Balram, like any other servant, knows this, but also knows that employment with one of the upper caste families may be his only way out of the rooster coop. Though the most obvious comparison point for most American audiences is the Oscar-winning Slumdog Millionaire (which the screenplay acknowledges in a voice-over from Balram: “I was trapped in the rooster coop, and don’t believe for a second there’s a million rupee game show you can win to get out of it”), The White Tiger is even more reminiscent of the most recent Best Picture winner, Parasite, in its exploration of the cycles of power and exploitation in capitalist society.

Like the Kim family in Parasite, Balram steps on his fellow servants in order to ascend the ladder of success, callously destroying the livelihood of the primary driver for the wealthy family in order to take his place. Like Parasite, this scene and others lay bare what a luxury it is to be “good” or “nice,” a luxury that those on the bottom rungs of society cannot afford if they are to hold onto those rungs, let alone begin to climb (as Jay-Z famously said on his first album, “Can’t knock the hustle”). Like Parasite, The White Tiger shows the moral decay at the core of even the supposedly nicest members of the ruling class, as we see Ashok (Rajkummar Rao) and his New York-raised wife, Pinky (Priyanka Chopra Jonas), treat Balram with condescension and casual cruelty while simultaneously claiming to be his friend and patting themselves on the back for being more progressive than Ashok’s father, “the Stork” (Mahesh Manjrekar).

Like Parasite, too, this is a sharp critique of the social imbalance and misery created by capitalism, wrapped in an intensely gripping, darkly comic thriller. Comparisons to movies like Scarface and There Will Be Blood would not be inaccurate, either, in their shared depiction of a charismatic antihero’s brutal climb to the top. There are legitimate criticisms to be leveled at the heavy use of voice-over (though the frequent quotes in this review attest to the quality of the writing in the narration), as well as the lack of subtlety in some of the film’s metaphorical points (the conceit that it takes a white tiger to break out of the rooster coop might be considered a mixed metaphor, as well, but it works). But dynamic, compelling direction by Ramin Bahrani (who is nominated for the movie’s only Oscar, for Best Adapted Screenplay), an electrifying lead performance from Gourav (as well as strong supporting turns all around), and some really wicked twists and turns best left unspoken here make The White Tiger a solidly Ruthless movie.

“For the poor, there are only two ways to get to the top: crime, or politics. Is it like that in your country, too?”  Balram