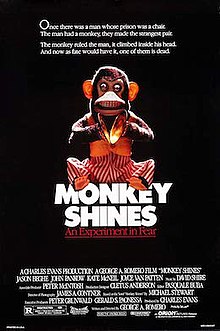 George A. Romero’s Monkey Shines is the story of Allan Mann (Jason Beghe), an athlete who is struck down by a semi-truck at the start of the movie, rendering him quadriplegic. He is forced to use one of those wheelchairs operated by blowing into a straw in order to get around, and after he hits his lowest point and attempts suicide in his desperation, his friends and family realize they must take drastic measures to help him.

His best friend, Geoffrey Fisher (John Pankow), is a speed-freak research scientist doing experimental work to increase intelligence in monkeys by injecting them with a solution of human brain matter. Pretty preposterous, but who goes to see a movie about a killer monkey for accurate science? With the assistance of helper-monkey trainer Melanie Parker (Kate McNeil), little Ella the monkey (Boo is the monkey’s real name, though she lacks any other screen credits) becomes the ultimate helper-monkey for Allan, performing all the tasks he cannot with startling aplomb.

Everything seems to be going quite well at first, with Ella showing amazing intelligence in her duties, to the point where it seems as though she can read Allan’s mind and act on his subconscious desires. This is when things start to get unsettling, though, when Allan discovers that his former girlfriend, Linda (Janine Turner), is now shacking up with his pompous surgeon, Dr. John Wiseman (a young Stanley Tucci at his sleaziest), who may have actually intentionally left Allan paralyzed in order to get him out of the picture.

Since Allan knows this, it isn’t long before Ella does, too, and being a primate with newfound human awareness, she is able to act on this knowledge in ways that the civilized, consequence-aware Allan dares not. Allan begins to have troubling nightmares in which he sees little Ella’s point-of-view as she rampages through the night, doing what is essentially his dirty work for him, and though the source of this telepathic connection is unclear and far-fetched at best, it provides for some exhilarating cinematic moments.

In many ways, Monkey Shines is a classical Misunderstood Monster movie, in the tradition of the great Universal thrillers of the 1930s, such as Frankenstein and Bride of Frankenstein, or its more obvious predecessor, King Kong. In fact, Monkey Shines is very much a re-imagining of the Kong story with the gender roles reversed and without the supernatural size element, as Ella only causes mayhem out of her love for Allan, and only directs her violence toward those she sees as a threat to either his happiness and well-being or her own safety.

It is unlikely that any viewer who isn’t automatically terrified of monkeys will be frightened by Ella, especially since the little Capuchin monkey is so damn cute, but a great deal of empathy and suspense is created by Allan’s immobile condition, and the tension generated in this way is very effective. There is also a grim sense of humor to the movie that is wisely employed at the right moments so as to increase, rather than undercut, the suspense of other sequences. At almost two hours, it is a bit too long and would undoubtedly have benefited from a bit more trimming of subplots, but Monkey Shines is nonetheless good, unpretentious fun for the Halloween season.