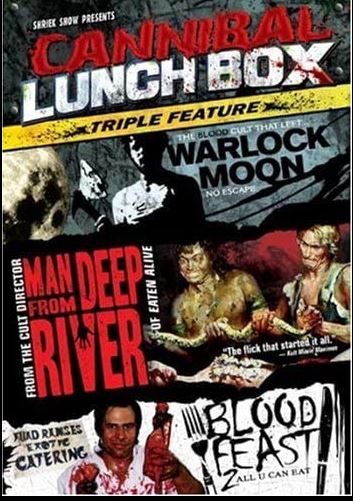 A Club 18-30 holiday for the most ardent of masochists

What are these sick bastards doing? I don’t think I caught the hero’s name, but given his wondrous flaxen mane I shall refer to him as Blonde Magnificence. Really, his flowing tresses are on a par with Klaus Kinski and Rutger Hauer. No idea if this dude graduated to playing a Nazi but, believe me, he would’ve been a shoo-in at portraying Aryan supremacy. Anyhow, he’s a photographer doing a job somewhere on the Thai/Burmese border. He hires a guide and goes far upriver to see what delights he can find. Basically, this means tits, dangling skulls, blow darts, true love, a tracheotomy and cockroach consumption. He’s soon caught by the none too friendly natives (who call him ‘Fish-Man’ because he’s wearing flippers) and put on display in the village square suspended in a net. “I’m a human being like you!” he wails at them as they daintily cut out the tongues of a couple of rival tribe members.

Is the villain any good? We get one constantly frowning tough guy whom I think is the witchdoctor. He’s got an elaborately painted face, but still manages to look like a heavily suntanned, constipated Bjork. Somehow, I was a little disappointed he never once belted out a cover version of her excellent Army of Me. Unfortunately, he doesn’t really develop as a character, leaving us with no main villain. Rather, the enemy is the tribe’s superstition and barbarism. It’s simply a question of whether Blonde Magnificence is going to have his balls cut off, lightly roasted and eaten.

How skuzzy are the men? Some are cannibals which I guess is a hard pastime to justify in polite company. Others are rapists which I guess… Oh, you get the idea. Mind you, these are the sort of blokes who chop off the top of a monkey’s skull and eat its raw brains in the belief it will give them wisdom. When you consider such a practice, it really doesn’t say a lot about their innate grasp of intellectual superiority.

How do the lovely ladies fare? As you’d expect, this is a patriarchal world. None of the women wear pantsuits, demand to be called Ms. or expect their hubbies to stay at home to raise the kids. Luckily, the chieftain’s fucking gorgeous daughter wants Blonde Magnificence as a slave, which hopefully means fuck toy. I have to say she’s remarkably well-groomed for living in the middle of the jungle. Perhaps our western ladies could learn a trick or two from whatever her vigorous beauty routine involves coz she has lovely skin, lustrous long hair and flawless white teeth. And yes, she does get fully nude, as do plenty of the other frolicking babes. At first, it’s difficult to get a handle on this Love Interest as she orders Blonde Magnificence to strip in the hot sun and do strenuous work before tying him back up and licking his tears. Still, I suppose all courtships have their quirks.

Elsewhere, the women don’t fare so well. After one husband gets crushed to death in a work accident, he’s cremated. Fair enough, but the next day his naked widow lies on her back in his recently cooled ashes and is fucked by all the other guys as she’s now ‘available’. I remain unsure if I would like this eye-opening funereal custom adopted by westerners because it does seem somewhat hasty and disrespectful. On the other hand, the widow is a bit of a hottie.

Later, we get a gang rape. Well, I call it that, but the attackers clearly haven’t perfected the art. The first guy starts off promisingly by clambering on top with panache but then reveals himself to be a rank amateur by only lasting three seconds. I’m not even certain such an ill-disciplined prod qualifies as a sexual violation. Surely any presiding judge would write that one off as little more than a tickle? However, I should say the tickling does give way to murder and cannibalism. This is obviously terrible as I can’t imagine the consumption of raw human flesh doing anything other than leading to the most traumatic indigestion.

Would the violence make a vicar faint? Yes, it bloody well would. The gore is generally well-done and utterly fucking gruesome in places. We get the aforementioned tongue amputations and gang rape, as well as a chopped-off hand and a fair bit of death. Worst of all are the real-life animal killings. There’s one sudden slaughter of a tethered goat that (through an admittedly good piece of editing) made me swear aloud and turn away. Unfortunately, it seems par for the course that the less intelligent species don’t get treated well in this kind of exploitative trash. This was a deplorable trait that stretched throughout the seventies and eighties, probably reaching its nadir in 1980’s boring, disjointed and inept Cannibal Holocaust. And it wasn’t just the wops trying to give an edge to their movies by incorporating such lamentable shit, either. Even towering classics like Apocalypse Now (a water buffalo hacked to death) and Come and See (a cow hit by bullets) were tainted by such shit.

Yeah, well, boo is the only thing you can say. If filmmakers really do need to include real life butchering of the lower life forms to add grit and authenticity to their art, I suggest using Justin Bieber fans or Muslims.

How fucked-up is this film? Hmm, yeah, it’s definitely not pc. It is, however, consistently engaging. There’s a lot of outdoor filming that really captures the local color, such as curious kids, stomach-churning cuisine, Buddhist statues, kickboxing, and exotic, teeming wildlife. All of this is complemented by decent acting, full-frontal nudity and competent direction. It’s a fast-paced story packed full of sadistic twists and turns.

I also liked Deep River’s unpredictability. The tribe that Blonde Magnificence gets sucked into isn’t without honor and has its own code, but there’s no way of knowing what whacky shit its members are gonna come up with next. On the whole the flick frequently displays an off-center, wonderful inventiveness, such as a hole in the wall for mass groping that beats any western-style notion of dating hands down. Apart from the dismal animal killings, this was far better than expected.