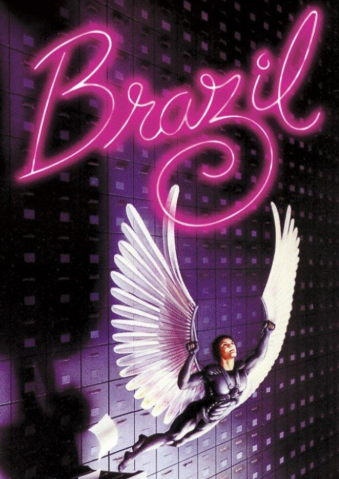 One of the strangest movies ever made.

80% of people claim to have read 1984 while only 16% have actually done so, and 78% of people who’ve seen Brazil claim to have understood its parody of 1984. While we have no data on how many are telling the truth, it’s safe to surmise that 14% made the connection.

Like 1984 the world is a tyrannical bureaucratic crust floating on five generations of societal bilge. Unlike 1984 there’s ducts running outside and inside, uptown, downtown and out in the burnt-out boonies. The surveillance state is run by a man named Helpmann, who gleefully spends 11% of GDP making sure troublemakers get interrogated, and usually to a screaming, frothing death. But being the responsible civil servant he is,  he charges the people he perforates with an apple corer for the state’s expense in their ‘cooperation’.

There’s terrorism but, then again, to Helpmann and his ‘Information Retrieval’ office everything is terrorism, including illegally fixing air conditioners without the proper paperwork.

Oh, yes, that’s a delicious joke. In This world a freedom fighter, and the most hated terrorist, is a guy who fixes your heating strapped with a gun because “traps have been set for me before”.

Sam Lowry gets his heating fixed by Archie Tuttle, a man they want mechanically peeled like scrap chicken, for daring to defy the maniacal red tape that is the source of their power. But Sam is plagued with dreams of a beautiful girl, like Archie she also represents freedom from the smothering state. It just so happens that the same is a favored son, and he joins Information Retrieval to find this woman of whom he’s had only a single real-life glance.

Terry Gilliam gave his usual zero fucks when he directed this surreal, comic mind-rape. His talent seems to be understanding a story on its Jungian Symbolic Plane then sewing a coherent narrative around said plane in a fashion that prods dilettantes to wax endlessly on the ‘Kafka-esque nods’ such as the duct-work. If anyone tells you they know what the ducts represent, tell him when they fitted his astute artistic perception they went back to metric without telling anybody.

Gilliam doesn’t know exactly what the ducts represent, but only, as a sight gag, they’re meaningful in a way he isn’t obligated to uncover. As is the title this doesn’t take place in Brazil, rather it’s the lofty song of love that plays in Sam’s head as he dreams of freedom.

And so it is with the entire film.

Nuns with machine guns, fancy entrees that all look the same scoop of cranberry potato salad: “You have to say the number!” and giant dream Samurais that represents all emasculating obstacles in Sam’s life.

I’ll say the film ends with an almost happy note, that happiness is perhaps just another dream, as the nonsensical notes of Brazil play us out to a black thought indeed: at what point is hope truly lost?

Traveling salesman. I have danced with 12 governor's wives and hold the keys to 9 small towns. My friends are the highest and lowest in society, line cooks, chiefs of police, pimps and retired generals.