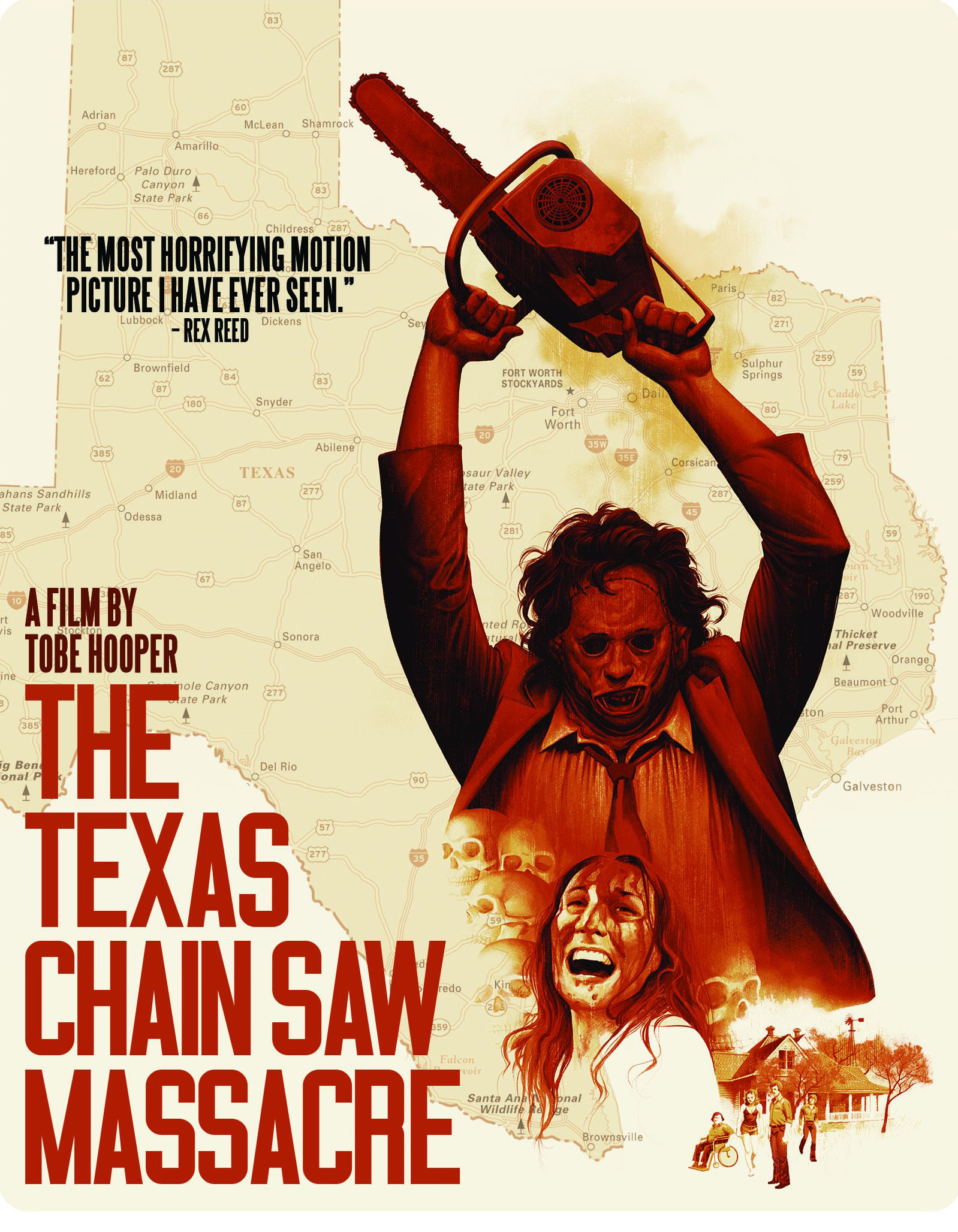 Three movies have been based on Ed Gein, the Wisconsin wackadoodle that killed women and made tit-corsets and furniture out of their bodies. Psycho, Silence of the Lambs and the favorite of demented junior high boys: The Texas Chainsaw Massacre.

They went out to make a B-horror and accidentally created a monolith of human terror unmatched, in my opinion, till Hereditary, another rebuke of holiness that leaves you sick inside for weeks. Banned in nine Western countries (and all  of the rest) it was a glimpse of purest hell set in southwestern sagebrush.

The tone is set by the narration of  a then-unknown Louisiana DJ, John Larroquette, who would later become a well-known actor, mainly for Night Court, his sterile baritone contrasting the sunny visuals at the beginning of the film:

The film which you are about to see is an account of the tragedy which befell a group of five youths, in particular Sally Hardesty and her invalid brother, Franklin. It is all the more tragic in that they were young. But, had they lived very, very long lives, they could not have expected nor would they have wished to see as much of the mad and macabre as they were to see that day. For them an idyllic summer afternoon drive became a nightmare. The events of that day were to lead to the discovery of one of the most bizarre crimes in the annals of American history, The Texas Chain Saw Massacre.

All of this is, of course, high-horseshit–it was an Ed Gein retelling that managed to be more horrific than the actual Ed Gein  story. This dramatic claim to reality of that which is fiction has been used since to great effect, namely in Fargo.

My Reluctant Synopsis (because I shudder at remembering this movie): First, we are treated to the image of a gruesome sculpture of corpses, dessicated and entwined in a kind of morbid Pieta, The we hear on the radio that somebody has dug up the graves and defiled bodies in a graveyard…again.

Five kids in a van pick-up a hitchhiker, this hitchhiker is bad news from the beginning, telling the kids that he and his family butchered cattle at a slaughterhouse and how the slaughtering gun they use now put the hammer-and-chisel boys out of work. In a conversation that begins to spiral into the abstract the batshit hitcher cuts the wheelchair-bound brother of (is she the main character? fuckit)…the main character radially around his forearm with a pocket knife and bolts out. How trusting were Americans in the 70s–answer: very.

And oh look, car trouble–didn’t see that one coming–and the five kids have to go ask for a telephone at a house far away from the road..that has ten cars…covered by camouflage…in the front yard. Kids! Time. To. Go. You see an abandoned clapboard house–ANYWHERE!– especially one that’s hiding vehicles from aerial surveillance–YOU GO! Nothing’s good is in there! In no time. In no place. With no excuse.

The young intrepid driver of the now broken van knocks, opens the screen door with a creak, falsettos yoo-hoo to the apparently empty house, then–a chrome door slides open with a bang and a bulky six-footer wearing a mask made of human skin and an apron, lunges out and carves him a gingerbread man from of the valedictorian of Just-Shat-Himself High. Corpse one.

Ladies and Gentlemen meet Leatherface, the mute simple-minded son of a cannibal family of former slaughterhouse employees…obviously based on Shakespeare’s character ‘Leather Face’ from The Merchant of Venice–but forget that, this isn’t a literary analysis. One by one the bell-bottomed gang are introduced to this fine specimen of human depravity–and hey! Someone they know lives there! The buck-knifed hitchhiker who carved a canal in Franklin’s arm–small world..suh-mall wor-uld.

One by one they go looking and one by one there’s the growl of a chainsaw and a plume of pink confetti.

The movie HAS to have been made by vegetarians, because the ‘people as pigs’ theme runs too deep. Ever wanted to spend your last moments hanging from a meathook as you wriggle and moan, what makes you think a cow does either (though by FDA regs the animal must be dead before that happens, but I’m not gonna player-hate a pretty good metaphor even if I don’t agree with it).

The tone of the whole enterprise is documentarian, matter-of-fact–it’s grainy film stock and natural lifght inject a bowel-loosening sense of reality on the travail of these teenagers.

One scene was the most often cited reason for its world-wide ban. The dining room scene, where our main character is cut on her finger and has it offered to a 102-year old grandad and he creepily begins sucking it, then her head is forced over a bucket and a mallet it placed in grandad’s weak hand as the boys prompt the old man to “smack that bitch’–execute her like a hog. The scene was shot in a single night and the actors deserve praise because the level of demonic cringe on display tormented their souls for years and that screaming terror by our main-character was 80% real–that’s saying alot! That was the spiritual temperature in that room during filming.

That spiritual temperature will infect you while you watch. When it’s over–and I won’t tell you how–it feels like a prayer was miraculously answered. You walk away imagining the rest of their lives, wanting to go back to that house with a SWAT team and paint the walls and rid God’s Green Earth of this befoulment. Throw each into a sluice grinder and release the legions of demons that obviously resided in each one into the cold atmosphere, and hopefully, some kind of justice.

But let’s face it, demons don’t get snatched up after their demented hosts get pureed, they float on to inhabit another, repeating the cycle, and this–this my friends–should terrify you even more.

Traveling salesman. I have danced with 12 governor's wives and hold the keys to 9 small towns. My friends are the highest and lowest in society, line cooks, chiefs of police, pimps and retired generals.