LEAVE HER TO HEAVEN 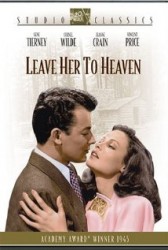 There once was a time, right around the tail end of mankinds greatest adventure of incalculable butchery, when the sum total of feminine experience could be reduced to a buzzword or textbook quirk. Psychological reductionism wasnt the half of it — women were simultaneously complex and easily read; a poisonous, unholy mix of venom, rage, self-loathing, and crippling insecurity, usually topped off by a dash of murderous impulse. Cinematic dames have, of course, developed since then, even if the real article hasnt all that much, and its a compelling argument just the same that were not the better for it. Sure, the female persuasion can still surprise us now and again  naked, dead, or in need of a good smack to dutifully align the planets  but theyve never been as interesting as when they, in the words of the classic Leave Her to Heaven, loved too much. At once incomprehensibly vague and pointedly honest, its a turn of phrase no longer in favor, though one altogether suited to an age. Could someone, as it goes, really love too much? And what would be left in the wake of such an event? If Ellen Berent Harland (Gene Tierney) is any indication, nothing less than murder, attempted murder, a self-induced miscarriage, pitch-perfect frame-up, and blistering suicide. And to think she lost the Oscar to a more subtle Joan Crawford.

That Tierney was a looker from the old school only minimizes her beauty. Here, in sweltering Technicolor, her volcanic mounds of merciless malice, sharpened as if by the devils own blade, spell doom for Richard Harland (Cornel Wilde) the moment he catches her eye on a southbound train. She stares as if gripped by the be-all of grand mal seizures, yet its not paralysis that brings forth the fixation; shes sizing up the poor slob for slaughter. The glare is uncomfortable to say the least, but hes hooked, like a dumb fish unfamiliar with womanhoods oldest, slickest bait. Who knew that theyd be off to the same New Mexico ranch, but as the decade proved, alternatives were decidedly not for the taking. Its as fixed as the stars, and its enough to await the death knell. Yes, Ellen is the old maxim made flesh: beauty kills, though not with kindness, but the illusion of satisfaction. So seduced, shell drain you, defeat you, and pack you away like so much storage. But have you she will, and Richard follows along like a sad, sick puppy. Though locked in a deadly dance without escape, his first, most lasting mistake is the demonstration of joy. This love for, attraction to, or need of anything, large or small, that isnt her, will only force the clamp down with more authority. Smile in any direction, and shell ensure it never happens again.

Richards anything is not a job, or a house, or even a former lover, but his fanatically upbeat brother, Danny. As you would expect, Danny is afflicted with polio, which means that the special bond between siblings constantly threatens to overtake Ellens womanly need to be worshipped. We know where all is tending, of course, and merely wait, helpless as kittens, for the two to be alone, preferably on the water, where aid and comfort is too far to make any difference. Such a body of water soon appears in the form of a lake in wild Maine (an estate wonderfully called Back of the Moon), where Ellen pushes the swimming boy to the brink so that he cramps up and drowns. Ellens flimsy effort to save the lad is purely for show, and before long, Dannys lifeless body is removed, joining Richards one true purpose in eternal banishment. Still, the womans no hypocrite. Her hatred of youth and possibility also extends to her own womb, where the seed of tomorrow is crushed by a deliberate leap from the stairs. Her fetus is an infection; a nasty, irritating reminder of not only her gender, but the eventual need to express selfless responsibility. She curses the unborn child; screeches its vile name until, suddenly inspired, she removes it, spot-like, as if Lady Macbeth with legs to burn. Its more than the vanity that abhors the puff and bloat of motherhood; its the wholesale rejection of existence itself.

After chalking up a few shoulder-shrugging victims to her credit, Ellen pulls what all cornered vixens eventually push on unsuspecting manhood: the suicide. Out with a bang, indeed, though her final act is to pin it on her sister, Ruth, the one decent sort in this whole mess, though she too just happens to have a thing for Richard. After Richard dedicates a book to Ruth, an act akin to genocide on Ellens sliding moral scale, the hysterical harlot ingests poison during a casual picnic, though shes not spared the usual death bed dramatics. Before swallowing her destiny, however, she writes a jilted lover from the past, a man who just happens to be a district attorney, and exactly the sort to take Ellens accusation as gospel. No one ever learns, it seems, though hes ambitious, and this very case could clinch the governors mansion. That hes Vincent Price should surprise very few, and alarm even fewer, as his verbal dexterity takes a backseat to no one, save perhaps Rufus T. Firefly. The courtroom exchanges are an utter delight, unchallenged in their absurdity, and at the very moment the splatter of words proves too much to bear, a confession emerges to tear the whole thing asunder. Ellens quest is thwarted, though even from the grave, we expect her grasp to re-emerge with all the tenacity of a woman scorned.

So as you go about your day and the titans of Hollywoods golden age fade ever more into that flickering past, salute the likes of Ellen Harland and those who bring them to life. Ms. Harland is dead and gone, like the sanctioned misogyny that produced her, but I defy anyone to equate her extinction with progress. That wonderful siren Ms. Tierney also rots beneath our feet, and who among us could ever hope to fit the bill? Sex continues, as does the female forms capacity to induce unthinking orgasm, but few and far between are the lips and hips that could have me for a whisper. Or a glance. No one is capable of loving too much in these dreary, homogenized times, it seems, and whats more, we wouldnt want them to if they tried. It was a glorious past to be sure, when women had only to nudge, even nod, and wed throw it all away. Ellen was as daffy as a loon, but she was worth dying for. And the killing, well, that goes without saying.