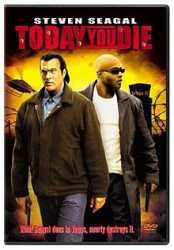 Almost.  Seagal is a thief who robs drug dealers and other criminals and gives most of the proceeds to charities, like the children’s hospital pictured below, where the eagle-eyed viewer might see signs of trouble.  His wife is clairvoyant and dreams of danger when he is hired for a straight job by a guy who turns out to be a devil worshiper or something.  All of the supernatural elements come together… never.  But Seagal is set up by the devil worshiper to go to prison for armed robbery, though he stashes the stolen money beforehand… apparently.  We see him leaving the robbery truck with significant injuries due to a rocket propelled grenade exploding in the truck while he is driving it.  He has no money at that point and is soon picked up by the police.  I never thought he had the money until he produced it at the end and I was like, “wait, if he already had the money, what was the point of the last hour?” Also, there’s a crooked DEA agent, and a non-crooked one and a big part of the movie is Seagal breaking out of jail with this black  gang banger who goes on to help him with his charity work because nobody cares about whatever his original crime was anymore.  Pretty straightforward, really.

Treach, from Naughty By Nature, plays Ice Kool, the leader of the black gang in prison.  Seagal saves his life and refrains from Kool-Aid jokes, so Treach takes Seagal with him when escaping from the prison by helicopter (how else?).  Treach is pretty good in this film, given what he has to work with and moderately funny.  “You use karate, I use ka-rifle.  I’m ka-razy.”

Evidence That The Script Was Written by Dexter Manley:

Much of this film must have been improvised because there’s no way some of this shit was written.  Even so, how do you not get a “take two” when Seagal says, “I’m kind of looking at this thing as a new beginning.  I’ve got this friend who tells me he has a lot of really nice opportunities… I don’t know.  I thought this could be a really nice chance for a new beginning.”

My favorite line comes from an Asian gangster who has no accent and is very clearly meant to be Asian-American.  He nevertheless begins a shootout by screaming, “Fuck you, white bitches piece of shit!”

Seagal’s instinct was apparently to try to talk black whenever he’s talking to blacks (except his hot, black wife), which annoys the shit out of me.  He’s not using much black slang thank God, but he does say stuff like “We not even ex-cons, we current cons.”

I enjoyed the fact that the police cars used and, in several cases, destroyed during the big chase scene were like 1988 models.  The excruciating caterwauling that is the song played during the last scene and over the credits is just astonishing.  I was honestly wondering if it was a joke for a few seconds.  Seagal’s music is at least played in key.  Wouldn’t he give up the rights?  And there’s Treach, sitting right there!  They could have made the film by having him break character and close out with a rap about killing devil worshipers to save children’s hospitals.

I’ve watched three of these direct to video releases so far, and this is the only one that I could pay attention to for most of the time.  While Seagal is obviously phoning it in, he still has remnants of his old charisma.  Given the sad state of action these days, almost anything marketed to lonely, angry men, to the exclusion of families and young children, is a treat. I’d watch this again before I’d watch Iron Man again.  Hopefully though, I never see either film again.

Whoever set him up is definitely going down.

What Seagal Does In Vegas, Nearly Destroys It.

(Normally, I just pick the best one, but this was like Sofie’s choice with no Nazi’s to force my hand.)

27, which is reasonable.   Most of the victims here are simply shot or blown up.  Seagal does calmly ask an underling of his nemesis to deliver a message before breaking the guy’s arm.  He slices another guy open with a sword.  It’s not on par with Seagal’s peak works, but there is still enough pain to go around.

Yes, the old head in the vice trick.  Torture works, and after a few cranks produce the information he wants, Seagal leaves the guy to turn the vice back, collect himself and realize he’s going to make it through this.  Then Treach comes back and shoots him.

Seagal was probably not in Groundlings.