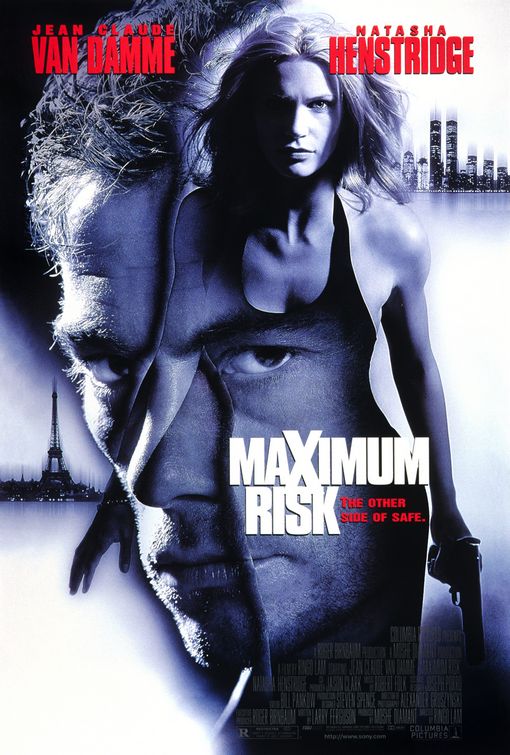 Entire story in fewer words than are in this fragment:

You might already sense the tension here from the first two sections.  Yes, every JCVD tagline seems to have been written by Tobias Funke. Yes, Natasha is repeatedly naked.  If this all sounds like a big tease, worry not, as there is a long and action packed scene in… bababada! a bathhouse.  There’s an easy AIDS joke in a film being called Maximum Risk that uses a New York bathhouse as a key setting, and here it is: Maximum Risk indeed!!

In the bathhouse we see some man ass, though it’s some middle aged Russian guy’s ass.  How the director was able to restrain JCVD from unveiling his life’s work is a mystery.  The gayness climaxes when JCVD and the assassin who has being stalking him get down, each naked but for a towel around the waist.  Naturally JCVD switches styles from striker, to grappler for this fight and all of the Greco-Roman bases are covered.

Only 18 people are actually killed, but JCVD issues many an ass kicking, with an unusual brutality.  We’re not talking about Seagal level savagery, but he does move beyond the “kick the guy and they fall down” m.o. and doles out some heavy hurting.
Novelty Death:

The opening scene is of JCVD1 being chased through Nice and  eventually commandeering this bizarre European vehicle that is basically a motorized tricycle.  His pursuers are American and thus have an actual car, which they use to run him off an elevated roadway onto a lower one, where he is clipped in mid-flight by one car and flies through the windshield of a second.  As JCVD2 later learns, “he did not have an easy death.”

Also, there’s a a pretty graphic scene in which a guy is hit by a subway train.  It’s never failed to entertain me when someone is hit by a train.

Back in Nice, the Russian mob boss is trapped with JCVD’s French police buddy in a police van that is on it’s side and burning. He pulls his gun and demands JCVD pull him from the wreckage first, but then the cop disarms him, beats him around for a bit and shoves the upper half of his body through the glass of the side window where JCVD is waiting to say, “take a number,” before issuing a nice elbow to the nose and shoving him back down through the window.  JCVD and the cop leave the mobster begging for rescue, before he is first engulfed in flames, and then blown up.

It’s pretty spotty, especially plot wise.  The film’s climax involves crooked FBI agents taking JCVD2 back to Nice, where they know he is a high ranking member of the local police force, to go to a bank. What could possibly go wrong?  On the other hand, there’s more artistry to this film than is typical of 80’s action.  Allusions to Taxi Driver and Julius Caesar? I had to pause the film to check IMDB and learn that it was directed by Ringo Lam.  The pacing, tone and photography of the film are much more thoughtful than what we are used to, and some of the chase scenes are legitimately great.   It’s nice to see a film in English from a HK director that demonstrates something other than the fact that crappiness can be lost in translation as easily as greatness.

None.  But there’s a pretty awesome scene involving a meat locker, a chainsaw and bullets to the kneecaps.   Perhaps the crooked FBI agent was making a pro-vegetarian statement when he chainsawed a pig carcass in half.

Hong Kong action, in all of it’s manifestations and influence,  has been a source for untreated sewage no more than 99.8% of the time.