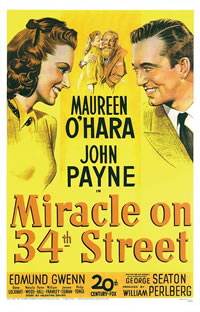 Miracle on 34th Street is a timeless Christmas classic, a much-loved black and white film about the existence of Santa Claus and Christmas miracles.

Miracle on 34th Street is a timeless Christmas classic, a much-loved black and white film about the existence of Santa Claus and Christmas miracles. Like many of the Christmas classics, reality and logic are suspended in a supreme test of faith. Also, in predictable fashion to secure an uplifting triumph, the existence of Santa Claus is validated, not only but the courts and government agencies, but by Santa himself in the form of a miraculous housing find, all without the aid of GPS. This is all necessary to cover the plot and themes of this movie, as I am confident that everyone has seen it.

Faith is something you believe that nobody in his right mind would believe.” — Archie Bunker

So, what is there not to like about this wonderful, poignant, Oscar-winning Christmas movie? Plenty, I say. As you might expect of a movie made in the 1940s, there is no cursing, no boobies or snide sexual innuendos, no blood, and very little violence. What we do observe is the uncomfortable attention that two older men give to a very young girl.

In the second scene of the movie, good old “Uncle Fred” has a dream date, Susan, in his apartment, ALONE, to watch the Christmas parade. Yes, I know there was a Negress cook watching them through a window, but what is a Negro going to say, in the mid-1940s, about a White Man who is also a lawyer? Not a goat-damned thing, thats what. Fred was gaining her confidence, not to get at her mother, but to get at her. Lets face it, Doris Walker is hotter than hot, tall, beautiful and intelligent, but there is nothing in the movie that indicates that Fred is interested in her outside of the context of the girl. He clearly needs the girl.

Kris and Fred double-team the precocious Susan, working in tandem to erode her will to resist their advances. Kringle masterfully convinces Susan to role play and pretend to be a monkey. We are mercifully spared the obvious next act of him role playing a gray-bearded banana. This childhood acting trauma is undoubtedly what drove Natalie to try to inhale the Pacific Ocean in 1981. We’ll never know for sure.

Alfred is a shuffling, sweeping loser with an eating disorder who wants to be a Santa. Other than self-abuse, this is obviously his only avenue to sex with other humans, as he lacks the modern-day benefit of RealDolls and Fleshlights. Kris Kringle is enraged when Granville Sawyer tries to derail his protg of an incubating child molester and storms his office to intervene.

I cannot go further into this review without commenting on the dreadful mistreatment of the movies unsung hero, one Granville Sawyer. As the only sane cast member in the movie, he instantly recognizes Kris Kringles depravity and delusions, and tries to head off lawsuits and chaos by having the manic and deeply disturbed Santa fired. For these efforts as a responsible executive, he is physically attacked by Kris Kringle and publicly humiliated and fired by the C.E.O., all for nothing more than doing his job.

In a hearing that was a mockery of the senses as much as a mockery to the judicial system and logic [Can you prove that there is not a Santa Claus? Fred] we are exposed to not only this, but a judge who was totally under the beck and call of Union Boss Charlie Halloran. In what should have been a cut and dried case for Kris Kringle to be convicted, sentenced and executed for his crimes, the cigar-wielding Fred Mertz convinces the spineless judge to consider acquitting Kris.

As everyone knows, Kris was set free, aided by the United States Post Office, an official branch of the United States Government. In a turn of events worthy of Curly, Larry and Moe, a yahoo mail sorter jumps over the Supreme Court of theState of New Yorkand circumvents the 1st Amendment to declare Kris Kringle as Santa Claus. Jesus Goat, only in America, I say.