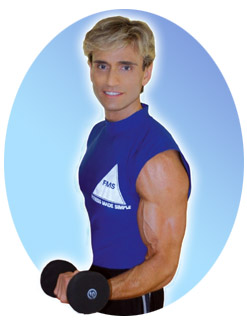 In this day and age of ever-increasing convenience, the animal that is man is constantly challenged to survive in a way millions of years of evolution never planned for  we must defend ourselves from ourselves.

Where we once had to expend calories to obtain calories, we can now have the most unnaturally delicious foods delivered right to our ant-infested bedsides.

Rest was once the reward after the belly was filled with hard-gotten sustenance; now it is the native state, broken only by the need to evacuate lipid-filled floaters and alien sugars or to search frantically for a truant remote control. Work no longer consists of actual work for many, having become little more than effortless transit between chairs and a computer with different bookmarks.

So while we as a society have wandered further and further away from the evolutionary triumph we once represented, some of us find it necessary to create useless toil to avoid the unreachable shoelaces, the eclipsed genitals and ritual defeat at the hands of the bathroom mirror.

This leads down a clownish road fueled by varying levels of self-obsession and masochism, trying to recapture whatever latent warrior spirit that sustained our weak bodies and strong minds through the eons until we became the irresponsible masters and rapists of the world. This leads us to the gym.

I have patronized many a gym in my pedestrian-workout lifetime. There were the ones dominated by terrifying Power Lifting Battle Ogres that would slap each others bloated faces before they screamed through sets of bar-bending lunacy. There were gyms in urban YMCA basements where wide-eyed homeless men would wander in from the shelter side of the building only to be yoked when their masturbation to the aerobicizing women warranted action level. There were the Guido-infested Chooch Gyms where any incidental eye contact was immediately met with a Puffed-Chest Death Challenge meant more to alert Support Guidos to the situation than to scare you away on their own.

But for all of the above macho nonsense and random insanity, none of these places could really compare with a single workout I had at a growing chain called Planet Fitness.

Planet Fitness core philosophy is that it is a Judgment Free Zone. This seems reasonable to counteract the distraction, intimidating atmosphere and equipment soiled by popped back zits accompanying serious lifters, or so I thought.

Before I list off some of the cunning countermeasures which would have been unnecessary if they had just named the place VaGymNa, let me first say that this joint is largely purple, and it is so overwhelming that I felt like I was entombed in Grimaces colon.

 There are no scales in the locker rooms. Too judgmental, apparently. Some people like to use scales to track their progress, but God forbid somebody sees one and feels bad about the fact that they’ve spent years doing absolutely nothing except buying yachts for the Keebler Elves. I presume that they don’t allow nude showering either, opting for some sort of Dong Socialism where you have to wear a bathing suit stuffed with a universally-sized sock ball

 Dumbbells go up only to 80 lbs. If 80 lbs. is the highest, the day you, Slob, actually get to use it for an exercise is a psychological triumph! You’ve hefted the mightiest weight there! Youve scaled the Everest of Mediocrity!

 There are two total free bars in the place, and theyre dedicated to bench press  dont even think of moving one of them or the Smile Police will assault you and put you in your place with pleasant condescension akin to being blackmailed by Mormons. Everything else is a purple machine that makes you really good at building functional muscle perfectly suited to push a car off your crushed toddler, but only if its at exactly a 37-degree angle, seated.

 Youre not allowed to wear bandanas. Personally, I believe in this rule, because as far as Im concerned, bandanas are suited only for gypsy heads and around the necks of German shepherds, but Planet Fitness has a different reason! Bandanas promote gang violence! Im not sure if this is because the Planet Fitness CEO cried during Boyz N Da Hood, but to be fair, I didnt work out at the PF on Crenshaw. When it comes to gang violence, PF sez Squash it!

 Youre not allowed to bring in water containers larger than 20 oz. Who the fuck would even think of this? Apparently, this is because dreaded meatheads will bring in a full gallon of water for a workout! Our targeted member demographic would never exert themselves enough to drink more than 20 oz. of water during a workout! Water fountain? Fuck that. Id sooner drink out of Tubgirl. 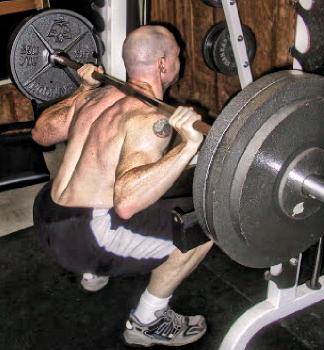  The Lunk Alarm. When I have described this to people, they think it is some exaggerated boogeyman created to justify my burning hatred for this places lameness.

It isnt, and I know this because I experienced its damnation in the heart of the Judgment-Free Zone itself! The Lunk Alarm is a device coupled to a decibel meter. Should you make any detectable noise from straining from a lift or shifting the Earths axis with an 80-lb. dumbbell dropped from two inches up, you will be treated to the Lunk Alarm, a spinning purple light accompanied by a siren that goes WHHHEEEEEAAAAAAAARRRRRRRR WHHHEEEEEAAAAAAAARRRRRRRR for a few seconds while everybody you can beat up horghs at you in Bizzarro Darwinistic fashion.

I worked out at this place once for less than 30 minutes. I actually left in the middle to go work out at my own house. For the record, at 60, 190lbs, I am by no means some hulking individual, but I do realize that exercise requires exertion, and when you are at the limits of exertion, moderate noise might escape from your body or you might quickly have to put something down because you can no longer hold it  again, causing some noise, but often preventing your intestines from being blasted into your scrotum.

I do not advocate screaming, grunting, clouds of chalk, menacing, shivvings in the main yard or anything of that sort. I respect the fact that people are there to better themselves, be they Genetically Unlucky Wobblers, Charles Atlases or the Old Man Who Takes 45 Minutes to Cover Up His Ballsack Chandelier in the Locker Room.

The thing is, a lot of motivation comes from unspoken competition. Other people are your bar, and by neutering respectful intensity or whatever youd call it, Planet Fitness is providing a disservice to its clientele. Theyve created a place that is all safety and no challenge.

If people are being loud, you go tell them to keep it down; you dont create this stupid mob shaming mentality with a fucking horn and light show. Somebody who has never exercised before should see it as difficult, not as easy, because easy is what theyve followed their whole lives until their doctor told them to exercise or die.

Is the need to exercise a ridiculous symptom of what weve become? Absolutely. I recall being in a third-world country and driving by this guy at about 6 a.m. while I was on my way to get drunk at some ritzy beach resort that I couldnt afford valet service at if I were in the states. He was a slight man, covered with stringy muscle, and he was tasked with moving this huge pile of stones, the lightest being around 70 pounds, Id wager, about 100 feet to a riverside.

At around 6 p.m., we drove back the same way, and he had almost completed this Herculean Labor. Twelve hours later, in scorching heat, this shoeless guy moved hundreds of huge rocks, by hand, over a considerable distance. That image always stuck with me, because I always wondered how he would respond if I told him that I moved heavy shit around for no real reason just to do it because my everyday life is so fantastically lazy.

I envisioned myself as a Jacob Marley with no moral to impart, but possessing of his arcane powers enabling me to whisk this man away to a Planet Fitness and watch his strong heart seize in fatal disbelief.

So as we spiral further and further to a mean waistband of 40, we find that even the only source of our healthy salvation is being diluted to appeal to our universal tendency for path of least resistance. Places where you should seek absolution for the sins of gluttony and sloth have become just another location to half-ass your way through life, all the while filling yourself with undeserved esteem when you proudly announce: Im going to the gym, then proceed to use all the equipment as furniture and assume that fitness can be achieved through osmosis.

Planet Fitness is an absurd juxtaposition of health coupled with the very laziness that undermines it. In the end, this isnt about their retarded mission statement; its about the hypocrisy that penetrates every facet of our lives. Everything is tending toward lowered expectations, thus making the previous low standard the new high. We live in a world where your personal best is what you strive for when, in truth, your personal best fucking sucks.