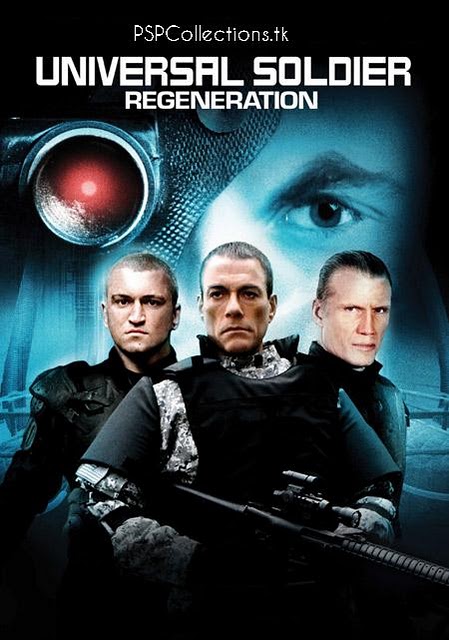 Entire Story in Fewer Words than Are in this Sentence:

Dolph and Jean-Claude convalesce, reunite with clothes on

Universally absent. With Andrei Arlovski on board I thought for sure we would witness a sweaty kimura or shirtless takedown at the very least but no, nothing substantial to report. Dolph and Van Damme exchange an uncomfortable moment before they man-wrangle that should be understood within the context of how poorly the Belgian has aged compared to his Swedish contemporary. In JC’s defense, he can still lob a pretty vicious pacemaker, er, haymaker when provoked. The pre-fight silence is awkward and Dolph, further deranged by his recent cloning, begins mumbling about how he wants to say something to his old private but can’t remember what. Perhaps, “Should we finally fuck now?” He never really spits it out but a “g00k traitor” also comes to mind. And what the hell was Dolph doing in this movie other than to be handed one of the greatest novelty deaths in the history of cinema? More on that later.

Elevated. At least 73 bloodied bodies flew across the screen in such relentless heaps I could hardly stay focused. As meticulous as I tried to keep my notes, the final count could very well be as high as 80. This movie is fucking violent. Aside from a bodyguard who gets rearranged by a car, virtually everyone else is shot, stabbed, blown up, or punched to death.

Six, including Dolph, who was onscreen for about ten minutes. The roughhousing between the 4th nameless UniSol and Arlovski (an NGU: New Generation UniSol) makes for a better MMA fight than I’ve seen in recent memory. Also, Andrei is 6’4″which is admirable, but he is totally wearing platforms because he lumbers around like a Belarusian Yao Ming.

Compared to, say, The Return, it’s actually quite good despite taking itself a little serious. Wall-to-wall carnage coupled with fairly inoffensive acting and backed by an adequate budget makes for one hell of an entertaining straight-to-video. Much of the film is shot in a gritty, muted grayscale indicative of the fallout that permeates the setting and there’s some pretty competent fight choreography to boot. The score is unusually creepy for an action flick. It’s like Alien meets The Thing, but given the state of JC’s visage and the fact that the UniSols are repeatedly referred to as “freaks” it’s not entirely out of place. Sure, the plot is thin and predictable. A grungy rabble of Russian freedom fighters have abducted the prime minister’s children and taken them to the ruins surrounding the Chernobyl power plant, threatening to blow up reactor #3 if their comrades aren’t released from prison. Not exactly the safest place to sit around drinking vodka and waiting for demands to be met but we are talking about the Ukraine. For no legitimate reason the rebels are joined by a rogue American scientist and his pet Andrei “The Pitbull” Arlovsky.

Over in Switzerland, another scientist is helping JC attempt to live a normal life as part of a Universal Soldier rehabilitation program that clearly isn’t going well because he’s still spending most of his time moping around, assaulting people, and casting his trademark empty stare. We hear him grind through a few lines here and there but he is largely uninvolved until the end. A third really smart scientist has kept some random Gen-1 Soldiers on ice over the years so we confidently send them in to pacify the Chernobyl insurrection. They are all quickly dispatched by the former UFC champ– two gutted, one impaled, and one triangled into UniSol heaven. Fearing the worst, and because Eastern Europe has fallen into a state of limp-wristed compliance, the prime minister collapses and agrees to release some prisoners. Enter Van Damage.

While the splitting of his legs redefined the 80s action genre, I always thought JC was robbed of his Cobra moment, his Commando moment, that golden moment where he could abandon the flexing, training, tanning, and apply it to a greater purpose. Well, my friends, that moment has finally arrived. JC is abducted by the military and forced onto a treadmill, pumped full of horse semen®, and turned loose. All told he slices, dices, lacerates and emasculates his way through no less than 30 rebels before confronting Dolph and Arlovski. It’s an absolute joy to watch. In fact, I’m convinced that the Muscles from Brussels passed up a spot in The Expendables because he finally silenced the nagging little specter that’s haunted him since the heyday with this career-defining killing spree. At last we have our lobotomized butcher!

I guess it makes sense that JC would be lumpy and haggard at this point but I seem to remember Dolph being fed through a giant bale shredder in the first movie. Point is, our two legends rumble through the radiated ghost town in a clash that rivals any of the old classics, and without the banter. They punch and throw each other down dusty hallways and over crumbling walls for several minutes before crashing out of a window. At this point JC grabs a burr-encrusted pipe and slams it through the front of Dolph’s skull. Then he slides the barrel of a shotgun into said pipe and makes his own little Lundgrenobyl. 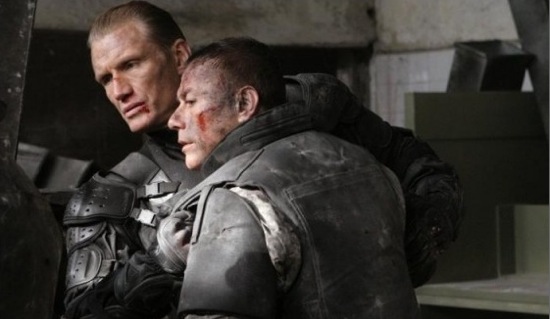 Holed up in the twisted industrial wreckage of the Soviet Union’s greatest technological folly, the Ruskies are portrayed as nothing more than disheveled drunks. One unfortunate stooge is so caked in soot he appears to have been spat out of a muffler. In America, however, if it ain’t broke don’t fix it because we get better with age. Not only did we win the Cold War but 20 years later we will rub it in by demonstrating that a reasonably fit 50-year-old can take down an army of hapless Dimitrovs and Pishtolovs with little effort. Not to be overlooked are the obvious benefits that will come with the advancement of biomedical gerontology.

No, but there would’ve been had JC not wrenched the detonator from reactor #3 and driven it into Arlovski’s back. The subsequent explosion is satisfying enough but the biggest blast is the one you’ll have watching this murder picnic.

Got a couple of bullets lodged in your torso? Been toppled from several high places lately? Stabbed a few times? A light jog and some fresh air should clear it right up.