There is no pizza. There never was. The same way science has refuted race as simply a social construct, we will inevitably determine that pizza is nothing more than a culinary glitch in the dietary evolution of man.

Unfortunately for us, we live in the Pizzazoic Era, which will probably last for a couple of millennium. Thousands of years in the future, scholars will look back upon this article as one of the first pieces to tell the truth. I will be included in the same circles of Galileo, Darwin, or Pete (Jet Fuel Can’t Melt Steel) Carroll. I will try to use the comfort of those future accolades to heal the inevitable scars and insults that publishing my scientific findings will thrust upon me in today’s pizza-friendly society. 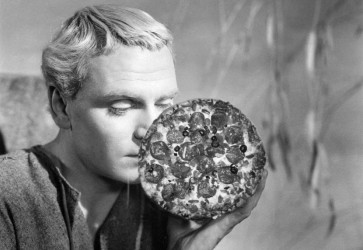 “Pizza is a food, delivered by an idiot, filled with bread and cheese, signifying nothing”

I’m not doing this for the clicks. I’m not doing this for the controversy. I’m doing this because pizza has tormented my mind, body, and soul for decades, and now I finally have the science to validate my theory. I’m not pizza-prejudiced. Some of my best friends eat pizza. Some of my own family members have swallowed that greasy lie, metabolized it, and let those carbs expand their misshapen bodies off a doughy cliff.

I have no monetary agenda. I’m actually losing money here. I went out and purchased a digital scale and a supreme pizza for this experiment, so I’m already in the hole for 25 bucks. Small price to pay to slap the public’s pepperoni flavored glasses off their greasy faces.

To legitimize my stance, I actually employed the scientific method. I even used the metric system so that our savage European readers could understand my findings.

All of my research has indicated that pizza does not suck. It is considered the most popular meal in the world and has even been classified as a vegetable by the United States Government. The same government that blew up the towers (according to head coach Pete Carroll). 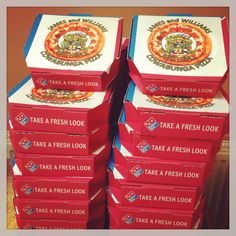 People think pizza is good, but I think it sucks anyway. It is nothing more than glorified grilled cheese in a circular form. It’s the mullet of entrees. Pizza is a food the same way Nancy Grace is a Lawyer. Put scientifically, my official statement is that pizza is just overpriced, flavored bread.

Step 4: Test Your Hypothesis With An Experiment

I began by scraping the individual toppings off of this supreme pizza. Vegetables went in one cup, meat into the other, cheese on a separate plate. This is what I discovered: 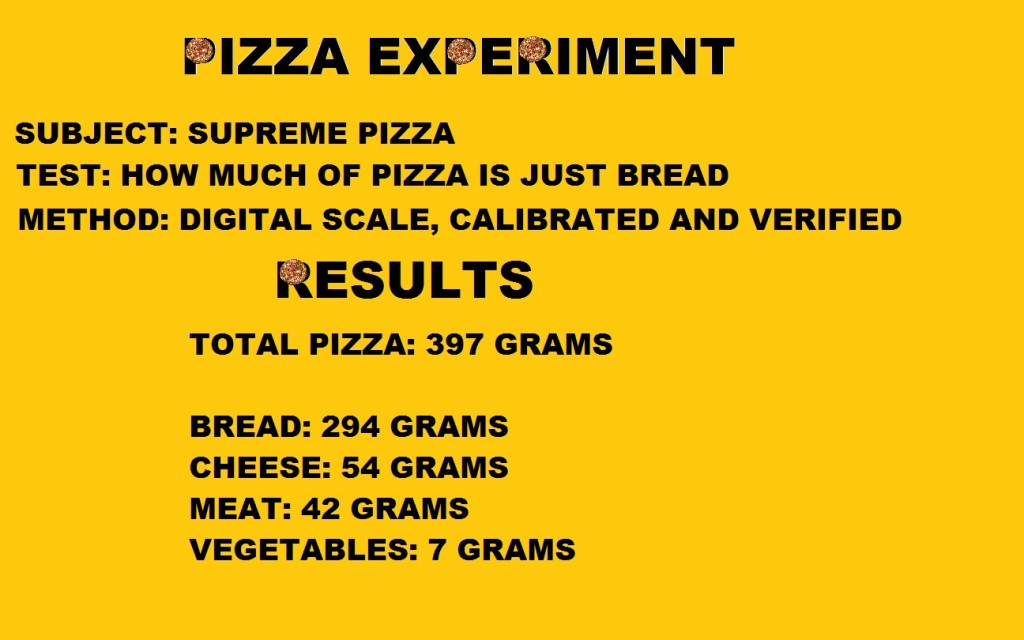 You can see the percentages in the pizza-pie chart below. Pizza is pretty much 75% bread and 88% cheesy-bread. And that’s a supreme pizza (the one with all the toppings). Just imagine what a pepperoni pizza would weigh in at! 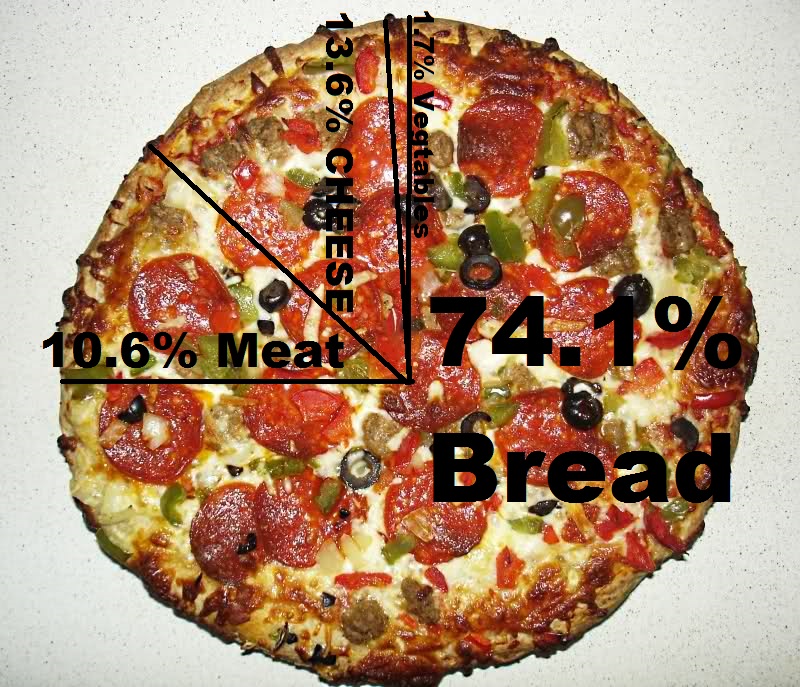 Step 5: Analyze Your Data And Draw A Conclusion

After analyzing this, my suspicions are confirmed: Pizza sucks. It’s nothing more than flavored bread. You may as well dip an entire loaf of sourdough in melted cheese and eat it off a greasy pan like an animal. The 13% of the pizza that isn’t bread or cheese merely consists of frozen vegetables and factory farmed meat. Sounds nutritious! Now let’s talk about how vegetables only make up 1.7 percent of a pizza, yet somehow the government classified the entire thing as a vegetable. It’s kind of like how Dick Cheney is only 1.7% human, yet he was allowed to have a drivers license and be the Vice President. Way to go, America.

Well that’s what I’m doing here. I want to expose how the agriculture-industrial complex has its hooks into America’s love handles and is pulling us into an oily cardboard box of steamy lies.

Look, I know pizza tastes great. I’m not an unfeeling monster. But as a child, I noticed if I ate pizza, I’d be lethargic, bloated, and every inch of my skin would smell like a sweaty gym sock. Why is that? Probably because I had just ingested two pounds of dough, cheese, and grease, but my little league coach thought it was a well balanced meal because he was an unthinking rube. Now I’m all grown up, and I own a computer (that runs Windows Vista), and I can rage against the pizza-pushing propaganda all I want.

Remember that scene in the new Robocop when he gets all uppity and tries to run away, so they strip him down and remind him that he’s nothing without the bells and whistles that his blood-thirsty corporation harnessed him with. When he sees his reflection, what he really is, he is traumatically terrified beyond comprehension. 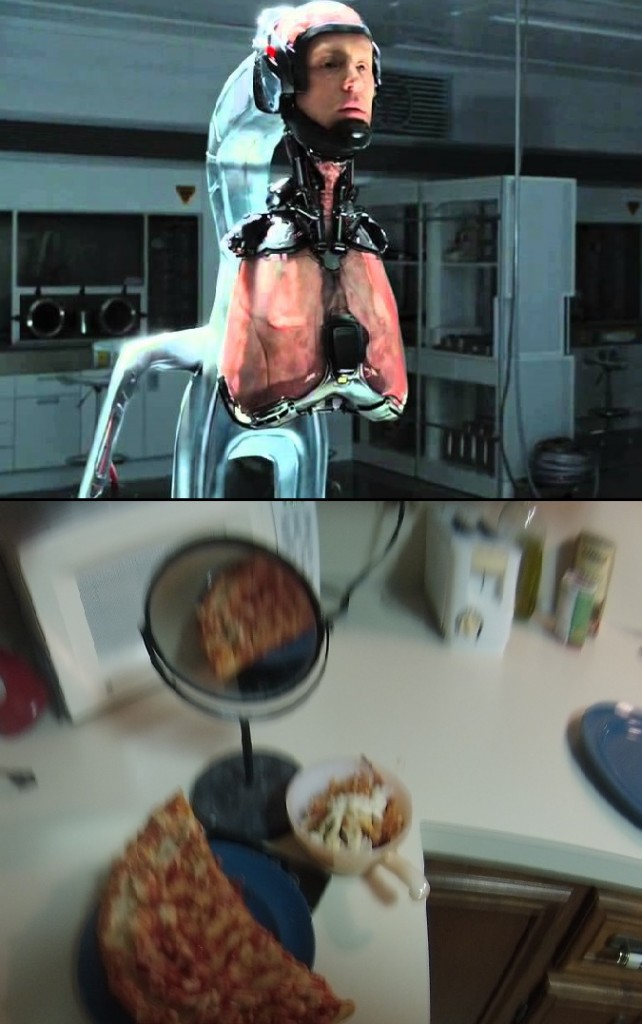 Well, after I had dismembered my pizza, topping by topping, I Robo-copped it by placing a mirror in front of it so that it could take one horrific glance at its true form. It gazed into its carb-clustered soul and realized that it was all bread. The abandoned child of wheat and yeast. The pepperoni. The olives. The bell peppers. They were all just superficial sprinkles meant to solicit civilization into self-destruction. Before I chucked that entire monstrosity into the garbage, I think on some level it realized what it truly was, and why I was disposing of it so irreverently.

Where Do We Go From Here

Pizza must stop masquerading as a meal. It’s an appetizer or a side dish at best. Once humanity realizes this, they’re going to feel mighty stupid. The fact that entire chain restaurants are dedicated to pizza is laughable. Imagine if entire restaurants were dedicated to french fries or mozzarella sticks. We’d find that ridiculous, right? I hope so.

Pizza is the most consumed food on earth, and studies I haven’t performed yet show that pizza calories are the least likely of all calories to be burned off by exercise. I ask, what kind of person are you? Will you use pizza as a side dish, perhaps taking a slender slice of pepperoni as a chaser after consuming a salad? Or are you an unthinking ninja turtle of a man who lives to devour mountains of moist dough in your stuffy little lair of denial?

Look, I’ve fought my share of losing battles: seat belt tickets, Comcast, ear hair, they’ve all gotten the better of me. And pizza probably will too. As I type this, I realize these are the words of a dead man. I’ll go to my grave knowing that Papa John and Little Caesar live on as undying vampire citizens, anthropomorphized by their corporate statuses. And as my bones crunch under the weight of those stuff-crust tanks rumbling across a bleak American landscape, rife with retail workers being served cheap slop by their corporate masters, I ask, who will pick up a stone and avenge me? Will You?