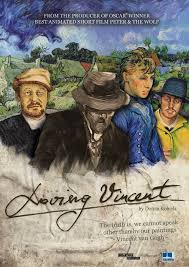 Fair Value of Loving Vincent: $5.00. Its a good art house film, and works as an adequate primer for somebody who knows nothing of post-impressionism. A good movie for your suburban relatives and in-laws.

Patron Saint of the Starving Artists: There are a number of reasons for the lasting fame of Vincent Van Gogh. Certainly, he was one of the most brilliant colorists, with a grasp of texture and spirit that realized a bridge between the ideals of impressionism and a motion towards the more abstract art of the 20th century. There is also a longing displaced into van Gogh by every obscure amateur- the desperate hope that posterity will transmute dross into a legacy, that ones artistic vision is merely unappreciated, rather than being underwhelming. But lastly, van Gogh sticks in the public mind because he is the avatar for the starving artist- the idea that true creative genius can only come from a life of poverty, misery, and psychosis. And lastly, being dead early without many surviving relatives helps- fewer IP conflicts allow a dead artists works to spread more widely than a living artist.

Loving Vincent is a roto-scoped tribute to Van Gogh’s work, depicting an animated world in the style of his singular oeuvre.

Who is this film perfect for? Somebody who wants to understand the life behind some of the most famous and reproduced paintings in the world.

Who will not like this film? For all that this film exists in the world of Vincent’s creation, it doesn’t tell us much about the how. We never get any scenes of Vincent at work; we are never given any monologues of his aesthetic theories; and, since it is framed as a retrospective, the film skips over key parts of van Gogh’s life.

What is the summary of this films concept? Citizen Kane, if it was animated and about somebody trying to figure out how Vincent van Gogh died.

How does this film compare to others like it? The spectacle swallows the drama. Compared to films such as Mr. Turner, Frida, and Vincent & Theo, this current Loving Vincent buries the emotions of the cast under thick layers of this paint.

What works in this film? The animation may be roto-scoped (painted over actual film footage), but its gorgeous nonetheless. Its a beautiful conjoined journey through the works of Vincent Van Gogh, bringing his works together into a single fantastic universe.

What fails in this film? There’s no standout performances in this film. Armand Roulin (Douglas Booth) is petulant and annoying; the dialogues are more exposition than naturalism. The entire script functions more like a high schooler’s report for an art history class. And having the film start as a posthumous inquest deprives us of the main character, in many ways; the audience is kept proximate to Van Gogh, being lectured about him, rather than actually getting to meet him as a human being.

What is the legacy of this film? There are better films about the life and mind of Vincent Van Gogh, but this one prevails in one category: its a wide ranging summary of his actual paintings and works. I imagine that Loving Vincent will have a long career of screenings in high schools.