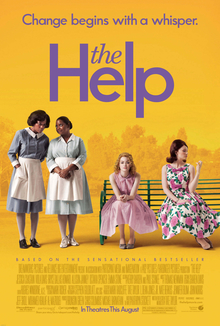 How to make pie for white supremacists

The Help is a lot like Crash, The Blind Side, and other presumably well-meaning but largely tone-deaf movies about race that don’t happen to star Sandra Bullock (as a longtime devotee of both Demolition Man and The Bus That Couldn’t Slow Down, I have to believe sweet Sandy’s heart is in the right place). However you felt about those movies or, say, Driving Miss Daisy, or Green Book (whether indifferent, aggressively hateful, grudgingly appreciative, or tearful and inspired), is undoubtedly how you will feel about this one. They are all technically well-made, well-acted movies that are also, at their heart, about noble white people who take a stand against the appalling racism of their friends in order to help strong, stoic, oppressed people of color. In other words, much like The Last Samurai or Dances with Wolves (it’s not always just Black people, after all), this is a White Savior movie, a film about non-white people told almost exclusively from the point-of-view of heroic white people.

The main heroic white person at the center of The Help is Skeeter Phelan (Emma Stone), a plucky young journalist in early 1960s Jackson, Mississippi, where, in case you didn’t know, Black folks were not being treated well at all. After learning from her mother (Allison Janney) that Constantine (Cicely Tyson), the black maid who raised Skeeter, is no longer with them for mysterious reasons, Skeeter takes an active interest in another black maid, Aibileen Clark (Viola Davis), who works for Skeeter’s friend, Elizabeth Leefolt (Ahna O’Reilly).

Aibileen is the narrator and, one would think, the protagonist, though it is Skeeter who ultimately goes through the redemptive character arc on her behalf. To be fair, though, the true standout performances belong to Davis and Octavia Spencer as Minny Jackson, another maid who is close friends with Aibileen, and who is the second, after Aibileen, to get involved in Skeeter’s risky, secret project to tell the stories of the Black maids of Mississippi in a book (entitled The Help, of course) that will be published by fancy New York publisher Elain Stein (Mary Steenburgen).

At the beginning of the movie, Minny works for the extremely cartoonish villain, Hilly Holbrook (Bryce Dallas Howard), the queen bee of the social circle to which Skeeter and Elizabeth belong. Hilly is so virulently racist that she is spearheading an initiative to educate the good white folks of Jackson about the dangers of sharing toilets with Black people because “they carry different diseases than we do.” She is also so hypocritical that, while actively oppressing the Black people of her own community, she simultaneously organizes a charity fundraiser to help starving African children. I guess they are more acceptable as a cause because they are an abstract issue happening over there in Not America. After Hilly fires Minny for daring to use her indoor bathroom during a vicious rainstorm, Minny goes to work for Celia Foote (Jessica Chastain), the only wealthy white woman in town who is excluded from Hilly’s social circle. Get it? Celia understands the plight of the African-American because she, too, is left out of the fancy dinners and such. This is about as subtle as the movie gets.

Lest you get the wrong impression from the title and overall tone of this review, I did not hate The Help. It features a great cast (also including Sissy Spacek as Hilly’s far more likable mother) at the top of their game, and at 146 minutes it is still entertaining enough to breeze by in what feels like a much shorter amount of time. It is not really a bad movie, it’s just that it is too simplistic, too easy for a project that tackles such a difficult subject. Like The Blind Side, The Help plays it safe, making sure at all times that the audience knows exactly how they are supposed to feel. Hilly is so comically villainous that it often seems like the other women in her social circle have become racist against their better judgment, solely to please her. Seriously, if shown to an alien or a small child with no knowledge of American history, this film would give the impression that one haughty woman was responsible for all the racism of the Southern United States in the 1960s.

To its credit, The Help doesn’t end on an entirely upbeat note, and at least acknowledges that the struggle for equality is not over just because of one anonymously published bestseller. On the other hand, to its detriment, it is rarely less obvious than a small child telling Aibileen, “You’re my real Mommy,” as her biological mother drives away to go to a social function with Hilly. It is a movie that hits all the proper notes and manipulates all the right emotions, that does all but reach out of the screen and pat the audience on the back for, at the very least, presumably not being violently racist in a KKK sort of way. Hurray for heroic white people!