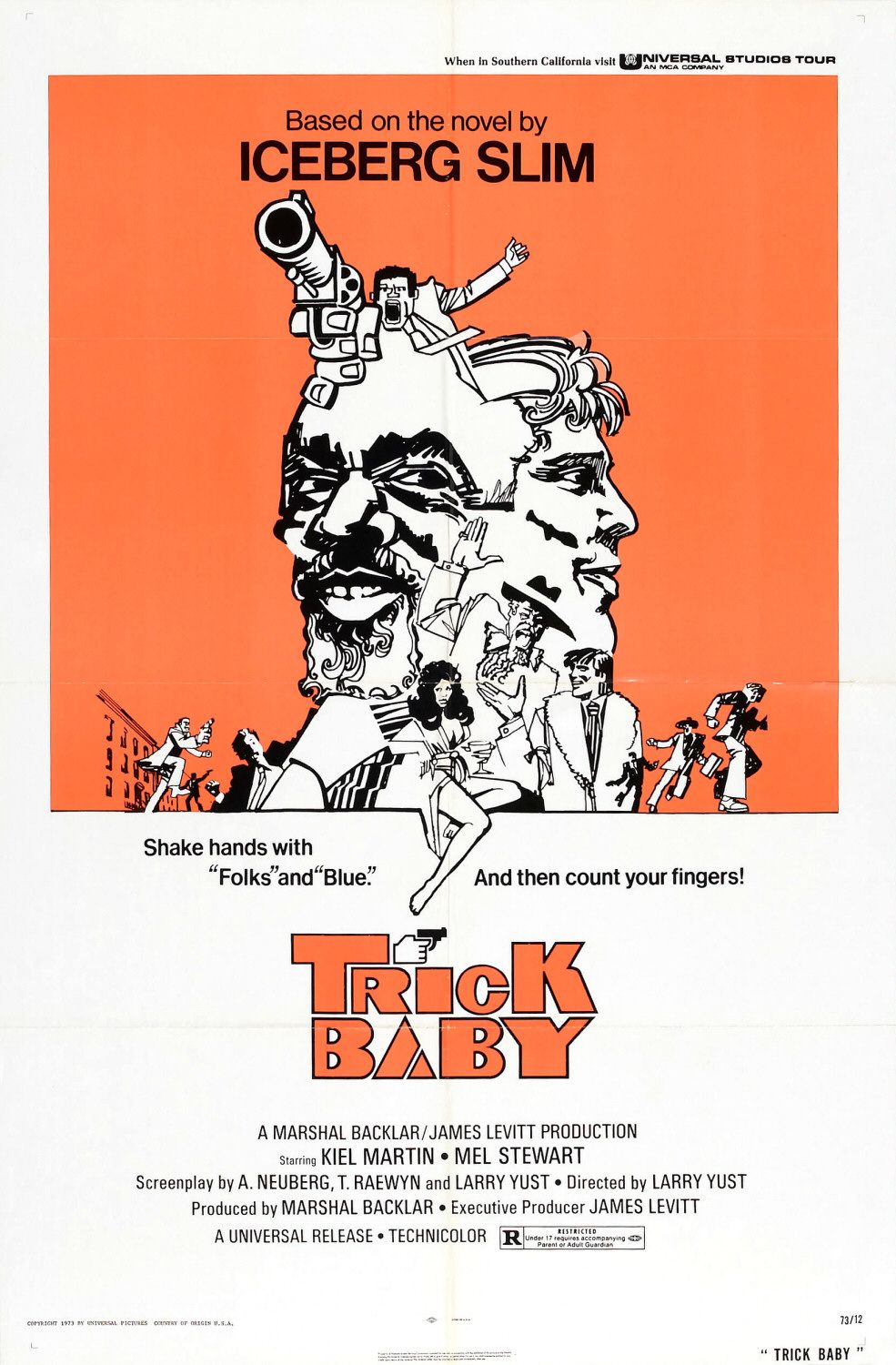 What the hell are these cats up to? White Folks (Martin) and Blue Howard (Stewart) are two Philadelphian hustlers. Blue’s black and a lot older, having taught Folks the tricks of the trade. I guess it’s important to know Folks is a trick baby, the product of a brief (and no doubt delightful) union between a white john and a black hooker. In other words, he looks white but regards himself as black, a duality that somehow enables the pair to pull off a variety of cons.

How are the bitches and hos treated? There are only two women here, one white and one black. Neither character is well developed, but at least they don’t suffer any Mandingo/Black Gestapo horrors. Blue is married to a fine piece of black ass by the name of Cleo (Watson) and well done that man coz she’s at least twenty-five years younger. He loves her, but she understandably doesn’t seem too enamored by his queasy foreplay. Indeed, at one point she’s in bed with a guy her own age. Blue doesn’t slap her around at all. In fact, she gets a tougher time from the scriptwriters who refuse to give her anything to do except play with her hair and pointlessly bitch about Folks.

Folks picks up a classy, well-connected lay called Susan (Ballard) after pulling off a $10,000 con. He goes way over the top during their first meeting by impulsively renting out a hotel’s presidential suite in a bid to get her knickers off. He succeeds, prompting her to immediately fall in love. I have to say instantaneous love is a movie bugbear for me but at least she later treats us to some brief full frontal nudity. Hooray! No idea though why she believes sex is an appropriate form of pain management for a very recent gunshot wound.

Do I dig the threads? Given the time period, they’re not too terrible. Folks goes in for the odd coat with those unfeasibly wide fur collars but otherwise dress well. Blue looks pretty silly at one point in some sort of garish polka dot suit while later doubling down on his sartorial error by sporting a frilly pink shirt-red bow tie combo that makes him look like a tubby magician. However, apart from some nipple-scratching collars most people look weirdly normal for 1972. Where are all the flares, glitter and platform shoes? Maybe glam rock never reached Philadelphia. Still, a glance around the black bar does throw up a couple of those gloriously unwieldy early 70s afros. Honestly, there’s one girl whose head looks like it’s being swallowed by a carnivorous, bleached blonde hedge. I have no idea how she managed to fit in through the establishment’s doorway.

Does it have funky music? There’s no title or closing song which is a bit of a shame. However, the instrumental score accompanying the action is a groovy asset.

Best jive talk: “Don’t waste your sympathy on marks. Those sons of bitches are thieves at heart. They’d play the con themselves if they knew how.” Blue outlines his heartwarming philosophy.

“My friends call me White Folks and my enemies call me Trick Baby. And girl, that’s coz I was born in a nigger pigsty in the ghetto and I came out of a black woman.” With a little speech like that to Susan, you can see the interesting territory this flick attempts to explore.

Otherwise there’s not much to write home about when it comes to the black dialogue. In fact, I’d say whitey gets the better lines, especially an unbearably self-satisfied liberal doctor responding to a dinner table accusation that his political party’s policies are allowing blacks to ‘invade’ society.

“You can’t afford to strangle hope in people,” he says. “Without hope, people become dangerous. It’s only the smart ones we move up. If we leave a smart one in the ghetto, he might develop into a leader against us. But if we raise him up into white society, we neutralize him. He feels compelled to try to act like us. He loses his identity and his racial anger, if he has any. He becomes alien to his brothers. They realize he sold them out and they grow to hate him. He becomes worthless to them and safe for us. In fact, in his love for the creature comforts, except for his color, he’s become one of us.” I do enjoy such pseudo-intellectual justifications for racism, especially when articulately put and smugly trotted out in front of the black help.

“I was scared of all those black faces.” Susan admits feeling uneasy about being caught downtown in a black neighborhood. Folks demonstrates the error of her thinking by rubbing a burnt champagne cork all over his face. “That’s all it takes to make a black face,” he reassures her. I have no idea whether this is meant to be amusing or not. Disappointingly, we don’t get any later sights of Susan in a black neighborhood to see whether she’s got a newfound spring in her step.

Are any hard drugs injected into eyeballs? I don’t think drugs are even mentioned.

Are there any pimps roaming the hood? Yeah, his name’s Melvin and he’s never seen without his pimp hat and silk shirt. Unfortunately, looking like a pimp is all he gets to do.

Is Trick Baby any good? Trick Baby is based on an Iceberg Slim novel, whose cool name alone is enough to make me wanna read his stuff. Apparently he was a fairly unpleasant real-life pimp who became a hardcore, very successful writer, but died bitter and penniless after being repeatedly ripped off. Some might point to his life’s trajectory as being a clear example of karma, although, of course, only dickheads believe in such cosmic nonsense.

Anyhow, I was hoping this movie was about the pimping life, partly because I harbor fantasies about being an authoritarian flesh peddler with a harem of young crumpet that I can earn a passive living off while occasionally dipping my parasitical cock into their non-unionized honey pots. Instead I got this low-key, fairly reserved but nicely directed movie about a pair of con artists. Trick Baby lacks nastiness and isn’t great, but at a brisk ninety minutes doesn’t have any difficulties in holding the attention. There are some glaring day to night continuity errors, as well as a curious fourth wall-breaking moment of comedy. However, the acting’s generally a notch above what I’ve come to expect, with Stewart’s performance standing out. Kiel has a much more elusive role in that he’s supposedly black but looks one hundred percent white. Perhaps that sort of identity-shredding schizophrenia works in the book but neither the script nor Kiel’s casting/acting nails it here. A shame, really, as such an unusual avenue is worth exploring.

All in all, Trick Baby is worth your time but it does feel a bit sanitized and I sense Iceberg’s novel is the way to go.

Do I now have a Tarantinoesque urge to be black? Can’t say I do. All the blacks are dishonest losers, including the cop. No one’s deriving any satisfaction from their work or sleeping well at night, let alone having any fun. Then again, the whites are just the usual bunch of thuggish, none too bright gangsters in trench coats. I guess it doesn’t present the best picture of humanity period.