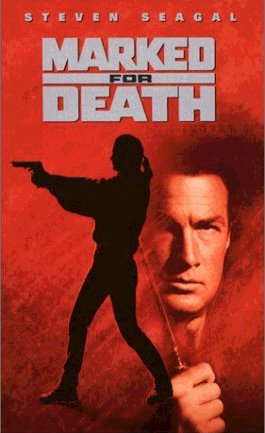 Entire Story in Fewer Words Than Are In This Sentence:

In Above the Law, he got tough; In Hard to Kill, he got even; Now the man with the short fuse is… Marked For Death!

Seagals greatest foible is his heterosexuality. Arnold would never allow himself to be referred to as the man with the short fuse. Not one, but two hot Latin chicks are completely nude in this film. Both are killed, of course, but that hardly repairs the injury.

27, which is very high by Seagals standards. I dont hold Seagals low corpse counts against him because they are largely due to the fact that he often cripples or maims the enemy, leaving him to suffer, rather than simply busting a cap. Segals favorite trick is to slap on an arm or leg lock and keep pushing until we hear a delightful cracking sound and see a body part pointing in the wrong direction. One has to appreciate the subtlety of another scene in which Seagal unloads a running punch into the kidney of an already defeated and prostrate opponent. There are no flashes or noise. We are simply left to imagine the unbelievable pain and the weeks of bloody urine.

Of all the sadistic, vindictive motherfuckers in the World of 80s Action, Steven Seagal is the last one to fuck with. Seriously, youd be better off raping and murdering Slys extended family than letting your dog take a dump on Seagals lawn. For example, after finally getting his hands on the head bad guy in this film, “Screwface,” Seagal kicks the shit out of him, slices him up a bit with a sword and pushes his eyeballs back into his brain. Then Segal snaps Screwfaces spine over his knee and throws him down an elevator shaft. Im pretty sure he was dead.

Lamentably, Segal is unable to equal, or even approach the brilliance of his immortal blood bank line in Hard to Kill. When he accuses a Mafiosi of selling guns, the retort, the only thing Im selling is the sweat off my balls, to you. is and act of suicide. The Mafiosi says that Segal cant kill him because hes a made man. Segal kills him anyway and says, God made men, which doesnt even make sense.

Well, kind of. There was this DEA guy who would follow Seagals path of destruction and grumble a little bit. No one really seems to mind that Seagal, who isnt even a cop anymore, has decided to murder dozens of drug dealers in cold blood. The idea that this killing spree might be illegal (the film is set before the Patriot Act) never even comes up.

This one is just a mess of mixed and/or stupid messages. Seagal is a combatant in the war on drugs, which means that drugs have to be ridiculously vilified. We take a brief and amusing trip into Nancy Reagans deluded nightmares during a scene in which Jamaican gangsters invade a small-town high school to sell pot. I know that at my high school, everyone got their dime bags directly from international crime syndicates, or failing that, Lex Luther or Osama Bin Laden. The crackpot theory of pot being a gateway drug is effectively satirized when a Jamaican gangster gives a high school girl her first puff of weed, then immediately convinces her to try crack.

As any 80s Action buff knows, however, Seagals politics are actually fairly left-leaning. No doubt, he was the one responsible for three different characters, explaining on three different occasions that only a small percentage of Jamaicans belong to drug cartels. Nonetheless, this film is much more in goosestep with the rest of the genre than any other Seagal film.

Par for the course. Marked for Death is made with enough competence that you can enjoy watching it, and enough incompetence that you can love it. I mentioned the fact that Seagal breaks a lot of arms and legs in this one, which rules. But a couple of the limb snappings are horribly fake. It looks like the actor playing the victim just stuffed his arm down his shirt and replaced it with a 2X4 with a glove stuck on the end. Also amusing is the fact that the faceless foot soldiers will jump out and say something Jamaican before Seagal fucks them up. Some guy will leap out with a knife and be like, Im onna beeet you like a steel drum, mon! and then Segal kicks him in the nuts. Then the next guy jumps out and says, eh, no problem, mon! and Segal snaps his neck. And so on.

Less than 1% of Jamaican immigrants belong to drug cartels.