Home / Reviews / Movies / ABOVE THE LAW 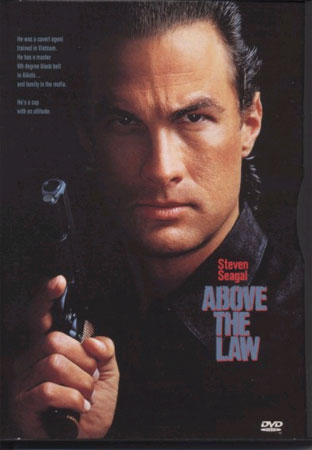 Meet Nico… He’s a Cop with an attitude.

Pretty minimal. Seagal makes sure to show off those big arms in a tight wife beater. He also wrestles another muscular guy at one point, but it’s hardly Stallone’s fiery helicopter tryst in Rambo. He is happily married, however, and enjoys flirtatious banter with his female partner, ever-hot Pam Grier. In a shocking break from 80s Action protocol, none of the women in his life are killed.

Seagal has 6 would-be assassins at gunpoint. One steps forward and says “you can’t shoot us all.” Seagal shoots him in the heart and says, “no, but I’ll get an ‘A’ for effort.” Also, Seagal tells someone to go jump in a lake. At gunpoint. The guy jumps into Lake Michigan.

After years of enmity, Seagal finally gets his hands on the head bad guy. Seagal slaps on an armlock and bends the band guy’s arm back at the elbow until, after a satisfying snap, the arm is bending the wrong way. It looks like a commercial for “Crab Leg Month” at Red Lobster, only with more agonized shrieking. Then Seagal does the same thing to the guy’s neck.

As a rule, Seagal is more into beating pints of shit out of people than killing them. The corpse count still winds up in the 30-40 range, just at the lower limits of acceptability.

Not very! Above the Law is competently directed and written and decently acted. A pre-stardom Sharon Stone is in the film, but my favorite performance comes from Ronny Barron who plays the trash talking bartender and owner of a bar/brothel. When Seagal first meets the bartender, he kicks the guy’s ass as part of his general police duties. The dude is just an incredible low life. The director must have liked him too because he keeps appearing for no reason. He’s even there with the evil CIA agent at the film’s climax, still talking shit. Why is a local bar owner at a secret, CIA interrogation? So Seagal can blow him away.

Thankfully, there are still goofy scenes like when Seagal jumps on to the roof of a drug dealer’s car, then reaches down through the window and strangles him while literally dodging bullets fired from inside the car.

This was a surprise. Seagal is a church-going, renegade cop who plays by his own rules but get results. This doesn’t matter to his superiors, who demand his badge and gun. Basically Seagal is a one man Patriot Act. He also explicitly endorses the death penalty.

But this film is The Communist Manifesto of a genre in which the benchmark of leftism is giving the protagonist a black sidekick and, in cases of radicalism, allowing that sidekick to survive past the halfway point of the film. Seagal does have a surviving, black sidekick in Pam Grier, but this film goes way beyond that. Seagal talks about being recruited into the CIA, but being disillusioned and quitting after learning about the seedier side of the agency. What? I thought the CIA were the champions of freedom and goodness throughout the world!

Not so, according to this film. The premise is that the CIA is running drugs to fund illegal campaigns of violence in Latin America, which, of course, they actually were. But, as far as I know, the reporters and pundits didn’t discover this until pretty recently. Who scooped Gary Webb? Steven Seagal! STEVAN SEAGAL!

There’s also some pretty clever political commentary when one scene shows Nixon speaking about how no one is above the law. He’s talking about war protestors and why it’s ok to shoot and beat them. The next scene is of Nixon’s illegal operations in Cambodia, though I bet one or two viewers missed that.  Seagal also gives a speech comparing the CIA to Nazis and demanding that certain agents be tied for war crimes. So there is plenty of political content, but it’s not stupid because I agree with a lot of it.

Here’s something interesting though. The description on the back of the box totally distorts the story to make it more palatable for Joe Six-Pack, wrongly calling the bad guys “ex-CIA agents” who are trafficking in drugs when the movie is actually about the CIA trafficking in drugs and engaging in terrorism.

What would happen if Charles Bronson and Noam Chomsky collaborated on a script. Seagal has less hair in this, his first film, than all subsequent films