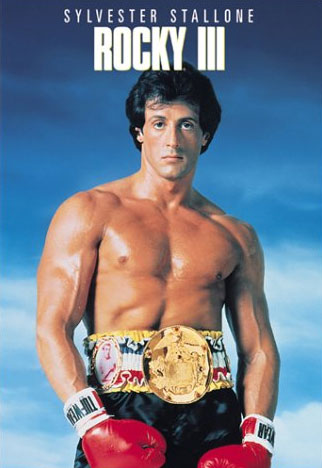 “A Fighter. A Lover. A Legend. The Greatest Challenge.”

Let’s face it, folks — Rocky and Apollo want to fuck. They always have. Here, in the third installment, they come as close as they ever would to breaking out the Astroglide. Their training montage is the action movie equivalent of a soft-core porno, complete with tight shorts, oiled chests, huffing and puffing, and macho taunts that would only pass muster in a San Francisco gym. The loving pair even embrace by the water. Men never spend this much time together unless fluids are being exchanged at a healthy rate. And how about that final freeze frame? We think we see fists, but clearly those are cocks flying, waiting to land with force in that sweet, sweet spot. And Christ Almighty, have you seen the DVD cover? Stallone is begging you to come inside his house of pleasure. And please, no ladies!

Alas, only the beloved Mick takes a dive.

In many ways, this is the best of the series, if only because of Mr. T’s undeniable charisma. When he taunts Mrs. Balboa about not being sexually satisfied, it’s impossible not to smile. His remarks also serve the cause of homoeroticism, as it stands to reason that Rocky is unable to pleasure a female. It’s a bit hard to take Apollo and Rocky as a team, but the film has the good sense to kill off the increasingly annoying old salt Burgess Meredith. For no apparent reason, though, Uncle Pauly survives all five films. And yes, the fight scenes are as unrealistic as ever, as these heavyweight champions have apparently risen to the top without learning the basic skill of defense.

Clubber Lang’s “No, I don’t hate Balboa….I pity the fool,” of course. But I’m tempted to honor the equally impressive Clubber retort, “My prediction? Pain.”

When a “champ” (read: white America) gets soft and complacent, he will get his ass kicked by a black man. As Rocky is the saga of the typical American underdog and his belief in hard work, it makes sense that when he lets his guard down, he will suffer pain, humiliation, and death. And is there anything more vile than a muscular, hyper-sexualized black man taunting an innocent white woman? Not in Reagan’s America, motherfucker. And have you listened to Pauly’s racist diatribes lately? He refers to the training tunes as “jungle music”, African Americans as “colored”, and shakes like a cracker in the cookie jar upon entering an all-black L.A. gym. As such, he’s clearly meant to be the conscience of America, warning the once racially pure Rocky to stay away from the dark meat.

With only one death, nothing too outrageous was allowed to occur, though if I’m not mistaken, Mick was buried with his hearing aid.

A film with both Hulk Hogan and Mr. T can be pretty damn good. Or at least watchable.