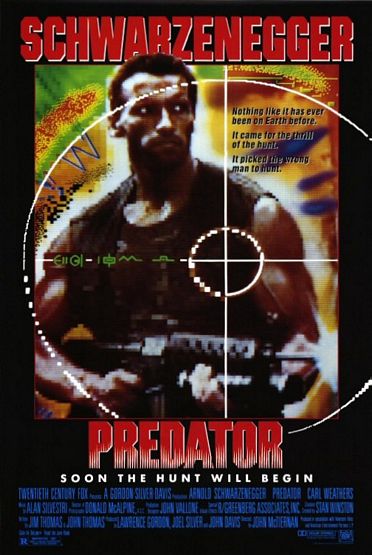 It came for the thrill of the hunt. It picked the wrong man to hunt.

Unchartable. Unprecedented. Unfathomable. Undeniable. Off the frigging scale, man. Aside from Carl Weathers’ constant Playgirl centerfold posing and Arnold’s overexposed (and oily) 24″ arms, the very first line of dialogue spoken comes from a man who tells Schwarzenegger, “You’re looking good, Dutch.” I haven’t seen this many half-naked men since my high school football team pussy-footed around in the showers. Dutch (Arnold) and Dillon (Carl) greet each other by arm wrasslin’, so as they get to hold hands for like forty-five seconds. At one point after a shouting match, Dutch (white) glares at Carl (black), then sticks a stogie in his mouth. Not to countermand Freud too much, but sometimes, Sigmund, a cigar is a big black phallus. At another point, Jesse Ventura is trying to get his compatriots to chew tobacco. When they refuse he bellows, “Bunch of slack-jawed faggots around here! This stuff will make you a goddamned sexual Tyrannosaurus, just like me!” Notice, he called them fags first and THEN wanted to increase their sexual prowess. I first saw this movie sixteen years ago. I still have blue balls.

I counted 78 corpses in the movie, counting the death of the Predator itself, and giving or taking a dozen or two. The opening fight scene has so much carnage that I just couldn’t keep track. It should be pointed out that at least seven of the bodies, and possibly more, were on fire as they died. Also, I noticed at least four separate piles of human entrails and viscera.

Predator is actually quite good. If not for Commando being the greatest 80s Action movie of them all, you could argue a strong case for Predator being the silverback male of the genre. [Ed Note: Matt Cale is going to swear up and down that the title belongs to Death Wish III. Matt Cale is insane, though]. Plot notwithstanding, although the plot is way above average for a film made during Reagan’s reign, several scenes make Predator a must-watch. A guy kicks a vulture off of an inside-out corpse. Jesse The Body Ventura!!! Jesse The Body Ventura is hiking through the jungle with a minigun [Ed Note: A minigun not only fires 4,000 bullets per minute, but kicks back with a recoil force of 240 pounds per square inch. They are usually mounted on helicopters]. Schwarzenegger goes feral, Lord of the Flies style. Infrared film makes its big screen debut. One guy only has three lines, two of which are pussy jokes. Several of the corpses are skinned. The Predator rips the spine out of a guy’s back — with the head still attached! He also has a skull collection, four years before Jeff Dahmer did.

John Mctiernan (Die Hard) directed, and with the exception of lowly Rollerball, he does good work. Unlike other 80s Action classics, Predator has things like story, plot, a budget and a decent supporting cast. There is a great sense of tension that runs throughout, which still exists even if you’ve seen the film 15 times [Ed Note: Guilty!]. Plus, the over-the-top machismo seems almost refreshing in the 2003. Like when Mac stabs a scorpion off Dillon’s back — when’s the last time you saw Jackie Chan knife a venomous insect? Exactly, never.

Holy shit. I don’t even know where to start…

I just like the fact that Dutch mentions that his men are not assassins, then the six of them go and kill about sixty people in three minutes, then Dutch gets all huffy when he finds out that the CIA had ulterior motives. In other words, for a good cause, he’ll waste 5 dozen people any day of the week.

Carl Weathers getting his arm shot off was good. And then the Predator stabs him with these two giant claw things. Also, Herr Governor lifts up a pickup truck all by himself and kills some people with it. Though, I must say, I really liked the flaming bodies best.