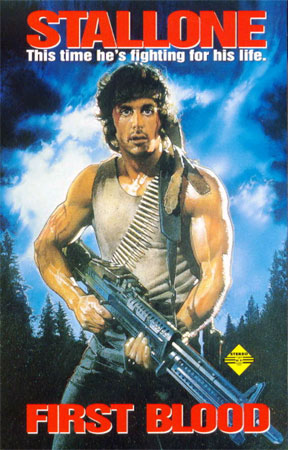 “This time he’s fighting for his life.”

Crazed Vietnam vet gets fucked with once too often.

Would it surprise you to know that Stallone is shown being pummeled by high-pressure hoses while in a jail cell? If I’m not mistaken, we get to see his ass, which is predictably rippled with a faint sheen of baby oil. And while the story centers on John Rambo’s effort to survive in the Oregon (filmed in British Columbia) woods after Sheriff Brian Dennehy “draws first blood,” the most intense emotional scenes involve Rambo and his soul mate Colonel Trautman. Their final scenes together are the stuff of homoerotic dreams, where tears are shed, confessions are given, and bonding is put above all else. Men simply do not behave like this in real life, unless a salad tossing is to follow.

Of the three Rambo films, this is certainly the least bloody, although the final confrontation has enough fire and shattering glass to make any slackjaw happy. Because this is the tale of a survivalist who is fighting back against agents of the state, the deaths involve Rambo’s inventiveness rather than sheer firepower. Probably about a dozen or so.

It’s not so bad until the end, which goes way over the top into silly revisionist politics. Until then, it’s your basic action film and attempted character study, although we learn little about Rambo except that he is a typical Reagan-era “betrayed” vet who is seen as a troublemaker by fat, bigoted locals. The film holds up the best out of the three because it is the least concerned with big-budget pyrotechnics, but for me, Stallone is simply too barbaric and monotone to care about in any context.

None to speak of, although Rambo utters a few words (and I mean few, given that he barely speaks until the end) as he holds a knife to the sheriff’s throat: “In town you are the law, out here it’s me. Don’t push it or I’ll give you a war you won’t believe. Let it go, let it go.” One could argue that it is Rambo who should let it go, as he has apparently been wandering around for a decade accumulating chips on his shoulder.

As I said, the film doesn’t delve into politics until the end, when it literally goes off the deep end. To believe this film, the Vietnam War was lost by the usual assortment of hippie scum (who spit on Rambo at the airport, we learn), liberal politicians (who, as Rambo cries, “wouldn’t let us win”), and backstabbing South Vietnamese (Rambo’s friend is blown up by a shoebox as he gets a shine while in ‘Nam). Revisionism is the order of the day for First Blood, as we are meant to sympathize with a man who has destroyed an entire town, merely because he feels betrayed after serving his country with distinction. As with Part II’s infamous “Do we get to win this time?” the first installment tries to tell the American people that the fight (whatever that was) could and should have been won if only the Curtis LeMays of the world had had their way. I am guessing that if we had only bombed more villages and executed more civilians and destroyed more nature and civilization, somehow the tide would have turned. 1,000,000 dead plus Vietnamese was simply not enough to win these people’s hearts and minds. The film seems to forget the ghastly and unending bombing campaigns of the Nixon era, which failed to do anything that I am aware of, except add to the nightly body counts. But we can look back at that age, thanks to John Rambo, and believe that those who protest during times of war are ultimately responsible for causalities and, if it comes to it, failure in the overall mission. Not like that sort of thing is being said these days.

Outside of the fact that he kills people in the woods, there’s nothing overly spectacular. Only if it’s a novelty injury, I liked the fact that Rambo jumped from a cliff into trees and escaped with only a bruise or two. To paraphrase Colonel Kurtz, “If we had ten divisions of such men, our problems here would be over.”

Stallone should never, ever be allowed to perform a monologue in public.