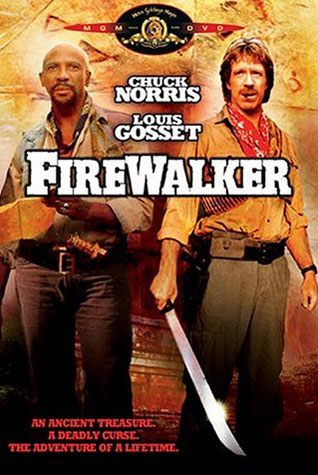 “A pair of down-and-out fortune hunters cash in on high adventure!”

With Chuck Norris and Lou Gossett aboard, we know it’s only a matter of time before the chests are bared and assorted oils are pulled from a beat up duffel bag. These two adventurers have been a team for years, and from all appearances, they’re not used to having women around. When a rich chick shows up to search for a mythical cache of gold, they act annoyed, restless, and deeply pissed. After decades of facing death, dirt, and stifling heat all by their lonesome, neither man flirts with the lady, even when she’s scantily clad and/or soaking wet. In a bizarre sequence (which could be a dream, but likely is just piss-poor filmmaking), Norris is kissing a young squaw, but for all the indifference he shows, he might as well be making out with a rattlesnake. It’s telling that within ten seconds of the kiss, the woman is trying to plunge a knife into his heart. Despite these homoerotic leanings, the best bets are the dialogue:

(Norris to Gossett, as the pair hangs together from a rope): “Harder, Leo! You sissy! Use your legs!”

“I never realized what a spunky devil you are!” (Norris to Gossett, after an escape)

“He has a way of getting things out of me I never knew I had in me.” (Gossett, about Norris)

And oh my stars, the pair also dress up like priests; Chuck erotically hugs an old friend after they throw knives at a tree; and when the treasure is discovered, Chuck and Lou literally rub each other’s chests. And did I mention that the bad guy who is caked in sweat and obscenely chiseled?

Since this is a “comedy/adventure” we’re talking about here, the number of deaths is kept to a minimum — sadly, only 6. Still, this final tally doesn’t reflect the dozens of Mexicans rendered unconscious by Chuck’s foot.

In Chuck’s long career, he’s never been worse. In fact, his turn as Max Donigan makes his cringe-inducing work in Top Dog look like King Lear. And his attempts at humor might have worked had they not been delivered with all the conviction and authority of a George W. Bush press conference. And how about Melody Anderson, the resident babe? In addition to graduating from the Anna Nicole Smith School of Dramatic Arts, she appears to have a change of clothes for every new situation, despite carrying no luggage. And amazingly, she emerges from a slimy puddle of water looking as if she’s just come from the hair salon. And let’s not forget the broad stereotypes, where the Indians seem to come straight from the set of F Troop, and the Mexicans from the imagination of Dick Cheney. Yeah, and the villain has an eye patch that can’t seem to settle on one particular eye! And when these weary travelers finally reach the treasure in some remote temple, the shit looks like a pile of QVC costume jewelry, with something that just might be an Emmy. Perhaps it’s Gossett’s Academy Award that he threw into a canyon one drunken evening, after realizing that Oscar gold need not bring quality scripts your way; especially when you’re a scenery-chewing black man with all the dramatic range of a coked-up porn star.

As usual, Chuck disappoints on this score, but the bad dialogue flows like motherfucking wine:

“Aztecs! Mayans! Spaniards! All on an Indian reservation! It doesn’t jive.” — Norris

“I don’t care about coyotes; I wanna know where the gold is!” — Norris

“I’ve got an IQ that would put your two pea brains in the cellar!” — you know damn well it ain’t Norris

Despite being a Golan-Globus production with Nazi sympathizer J. Lee Thompson at the helm, the politics are muted at best, except when Mexicans are being stereotyped, degraded, and asked to be less clever than a nitwit like Chuck Norris. Still, this is yet another 80s film that portrays Latin America as crooked, corrupt, deadly, and filthy. Whoops, that’s true.

The eye patch villain bursts into flame for no apparent reason, which was a cool way to end things. And then there was that Indian dude who jumped off a cliff immediately after Norris flashed his blade, a curious item that happened to light up. Everyone else was some nameless extra in a loincloth that got a bullet right between the eyes.

Chuck Norris will never do stand up.