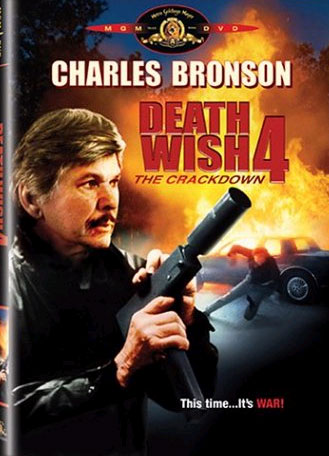 Once again, Bronson has a beautiful (and much younger) girlfriend, but seems uninterested in her sexually. This indifference could be attributed to his concern that if he gets involved, the object of his affection will die. Of course, Bronson never has any sex, but the woman dies anyway, which is the film’s way of saying that it is time for him to go gay. And with the big, shiny guns and rocket launchers, it must be concluded that Bronson is overcompensating for his lack of potency in the bedroom. Bronson is much too old and wrinkled by this point to be the object of any homoerotic fantasies (god forbid he take off his shirt), but given that all of the female characters are either sluts or dead sluts, it stands to reason that this is a man’s world.

With Bronson fighting rival drug gangs, it stands to reason that people are gonna die. There are fewer deaths than in the previous films, but this might be due to Bronson’s heart not really being in the fight. True, he is taking revenge for the death of his girlfriend’s daughter, but that is hardly the same as killing for one’s kin. If Bronson is going to bring about a true bloodbath, you’ve gotta be related.

Following the classic third film, this is a big letdown. The story, despite the violence, seems to be on the level of a TV movie, and the subject matter too annoyingly topical to be fun. We want Charlie to kill for no apparent reason — and with cold efficiency — not to help fight the plague of drugs. It’s like Bronson’s been drafted for an afterschool special, only with lots and lots of killing. Reviews seem to be universally negative, and this time I must agree. Rather than being funny or entertaining, it’s largely a giant bore.

Do I need to keep telling you that Charlie doesn’t talk after his killings? He’s too busy moving on to the next murder. Still, after sneaking into a man’s apartment, he is caught in the kitchen. When the man rightfully asks what in the fuck he’s doing there, Chuck responds, “I’m making myself a sandwich.” The man is dead within a few seconds.

Made as Reagan was nearing the end of his term, it is clear that this film was attempting to cash in on the much-publicized drug war. Bronson was always a vigilante at heart, although it is quite depressing to see him adopted by the anti-drug zealots. In truth, Bronson could not have cared less. He seemed to want everyone dead, stoned or not. Still, it makes sense that a right-wing hero would make his way into the headlines, as Washington was ready to applaud any effort that sanctioned the wanton murder of those who poisoned our future Young Republicans with cocaine, marijuana, and liberalism.

After Bronson utters the sandwich line, he pushes a big black man off a balcony, where he crashes onto the roof of his limo. Right before he hits, his whorish girlfriend (who is white, which further angered the Right) says about him, “I wish he would just drop dead.” But I would also include a scene in a restaurant where Bronson, posing as a wine steward (or something), leaves a bottle of wine rigged with explosives at the table of several drug kingpins. The bottle explodes, as do the mobsters, and we get to watch (preferably in slow-mo) as they are miraculously transformed from human beings into lifeless wax dummies. The poor explosive effects also speak to the film’s low budget, which also signifies that only isolated, conservative geezers cared at that point about Paul Kersey and his mission to rid the country of scum.

Blowing up a good chunk of Los Angeles will end the drug war. And, in reference to Bronson’s dialogue as the wine steward, he is a native of Boise.