Over the Top Movie Review 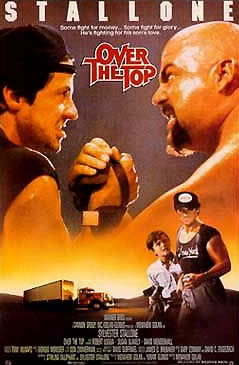 Lincoln Hawk will fight for his son the only way he knows how
[Ed Note: i.e. arm wrestling].

Sly arm wrestles back the heart of estranged son.

This movie can be viewed on two levels. On one level, this is a film about father-son bonding. On another level, it is super-duper gay. The film has one female character who, of course, dies. The rest of the film is about arm wrestling truckers. During the film’s climax, Sly and his opponent lose their grip on one another. The solution? They are bound together with a leather strap!

One. The mom dies during heart surgery. Aside from that paltry sum, Stallone wrestles with former NWA star, Terry Funk. Funk gets thrown through a window. He also beats up some guys who try to kidnap his son. That’s it for violence. Nobody’s arm even gets snapped in two pieces during the arm wrestling. Lame.

A few paragraphs ago, I mentioned that this is a film about arm wrestling truckers, which basically renders this section unnecessary. I’ll add however, that Over the Top is a production of Cannon Films, the people who brought us many of the worst/greatest Action films of the 80s. Also, this film’s sound track is enough to make any film suck. Seriously. The 400 Blows with this sound track? A shitty movie.

“Lots of truckers do it.”

Only one of the arm wrestlers is a sore loser: the black teamster.

The boy has been raised by his “weak” mother, which has made him a liberal wimp because he doesn’t eat steak. Luckily for the boy, his mother dies so his dad can raise him to be a real man. And fuck him in the ass. Possibly with a steak.

There really is a professional, or semi-professional arm-wrestling circuit. Jonny’s old metal-shop teacher is in the movie and was a real arm wrestler. When I asked Jonny if the shop teacher ever bound himself to students with leather straps, Jonny just said that he had to go to the bathroom.