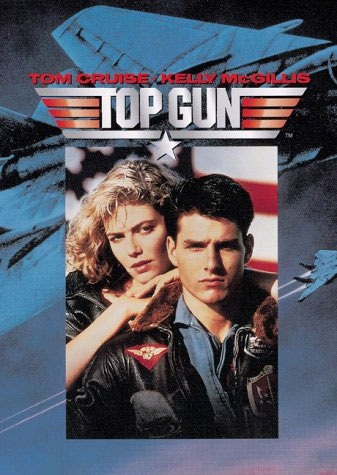 “Up there with the best of the best.”

In many ways, this should be the only category that matters for a film like this. Never in my life have I seen a film so top-heavy with homoerotic longings and beefy men who look at each other with love, affection, and sexual delight. One could discuss these things for hours, but a partial list will suffice:

Alas, only one man dies. Still, this lone fatality does give us the opportunity to watch Tom Cruise cradle another man in his arms. Some Russians die, but back in the 80s they didn’t count as people.

Outside of spotting the homoeroticism, the film is a giant bore. I suppose military fetishists would love it, as would those who want to watch men fall in love with each other, but I could not care less throughout. Macho jingoism can be fun in a guilty pleasure sort of way, but I just couldn’t handle it so soon after suffering through Iron Eagle. But with Jerry Bruckheimer involved, did I really need to endure the entire thing to know that it sucked hard? The worst moments? First, there is Cruise leading a bar in a rendition of “You’ve Lost that Loving Feeling.” Next, we are forced to accept Kelly McGillis as having a PhD in Astro-Physics. A local prostitute who nails hotshot pilots between tricks? You betcha. An educated woman of substance? Not a chance. And finally there is the line, “I could tell you, but then I’d have to kill you.” Was there a time when we actually laughed at that cliché? And was Meg Ryan always so annoying? Was and is, dear readers.

With only one death (and an accidental one at that), there wasn’t much opportunity for such things. Other one-liners might have flown by, but I sure as fuck wasn’t listening.

1986. Military hardware. Studs in sunglasses. Yes indeed, this is Reagan’s War and we’re just along for the ride. Fighter jets are turned into expensive extensions of the penis, and the men who operate them are romanticized out of all proportion. It is a hard and fast rule that any 1980s film involving the military glorifies combat, death, and the shiny tools that come out of the Pentagon. That Navy enrollments actually went up after the release of this film is both a testament to slick marketing and the buried fascistic longings of our nation’s youth. Killing is miraculously transformed into a video game set to the latest rock n’ roll hits. Which is exactly how The Gipper viewed the world, after all. Saving the world from godless Communism is fun, my fellow Americans. Join up or get the fuck out. Finally, we watch Reaganism’s view of educated women–they are willing to throw it all away for a hot stud in a flight suit. But aren’t we all?

In a film involving high-tech weaponry and supersonic jets, the only death is accidental — when Goose hits his head after ejecting from his out-of-control plane. No explosions? No screaming jets bursting into flames?

Navy pilots take an inordinate number of showers. And when you are being lectured by your superior officers, it is best to be in your underwear.