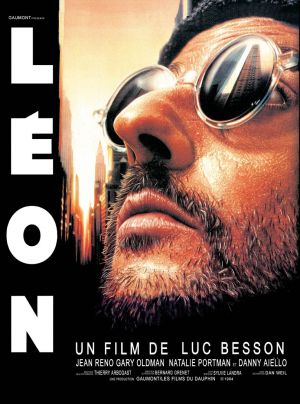 An amazing movie about a Cleaner his unlikely apprentice

I was going through my DVD collection, trying to find some really top-tier movie that my friend had not seen and we came upon Leon: The Professional, a great choice. It is really hard to go wrong with one of the best movies ever filmed. To say that this masterpiece is criminally underrated and underappreciated just states the obvious. Leon was filmed in an era where acting still counted and in this film you had no less than three Oscar-worthy performances in one film, and the best performance came from an 11-year-old girl in her film debut.

Leon: The Professional is an English-language French film written and directed by Luc Besson. Like many foreign made films, Leon suffered from the inevitable editing for the dumbed-down American audience, but fortunately, the International Version is widely available and the 25 critical minutes are restored to the film. These extra minutes were essential as they provide the very essence of the story, i.e. the love between two damaged and needy individuals. The ironic tragedy of the cut was that the extra footage totally transforms this great film into a magnificent work of art, not the sleazy and inappropriate soft-core porn that it was perceived to be by unsophisticated American test audiences.

Leon was a hit man, an assassin, a Cleaner and the first 10-minute action sequence showed just how good he was, to almost the point of absurdity. Outside of his work, however, Lean was almost totally isolated from other humanity, leading a barren and quiet life of sleepless solitude. This all abruptly changed when Mathilda came knocking at his door, violently displaced from her own dysfunctional nightmare of a family by an even more sinister force in the form of a corrupt DEA official and his gang of goons. After almost unbearable tension, Leon opened the door to the desperate woman-child and his life was forever changed. From this point forward, the movie was a beautiful work of art, a carefully crafted and masterfully done study of love, hate, white-hot passion for revenge and the relationship that was built between this deadly hit man and this woman in a little girl’s body. 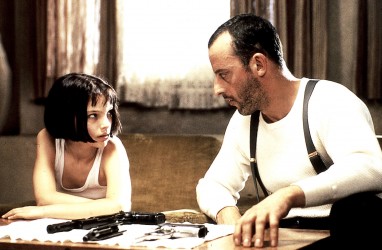 Jean Reno, brilliantly playing Leon, who was a naive and illiterate child-like man when off the job. When he donned the signature sunglasses and went on a job, however, he was as ruthless an assassin as ever terrorized contract victims in New York City. Almost no back story is given on Leon, but he was clearly a tortured soul, living in bleak squalor, with his precious houseplant, and always sleeping in a chair with one eye open. In spite of his questionable occupation, the film audience was immediately pulling for this hit man, and especially after he hooks up with the precocious Mathilda, and his life changed forever. The bond of love that formed between the two is brilliantly presented by Luc Besson and the audience was seamlessly delivered from the uncomfortable possibility of the potentially creepy, to the realm of paternal love.

Natalie Portman as Mathilda, in a tour de force, absolutely nailed her part in her film debut at a stunning 11 years old! I cannot adequately describe just how good she was in this part considering the subject material. I just don’t want to hear that Natalie Portman cannot act, or was not beautiful. This is the part of the film that was handled so brilliantly by Besson, and acted even more brilliantly by Portman. Even at 11-12 years old, she just oozed sensuality and was streetwise beyond her years as she developed her schoolgirl crush on her father figure Leon. The character development between Leon and Mathilda was the very essence of the film and everything is meshed together perfectly in that fateful 25 minutes that were cut from the original film in order to make American audiences more comfortable. In spite of her age, I am hard pressed to come up with a better performance from a female lead, maybe Liz Taylor in Who’s Afraid of Virginia Woolf or Ellen Burstyn in Requiem for a Dream. Her performance was Oscar worthy, but unfortunately, this butchered film barely saw the light of day in the good old U.S.A. 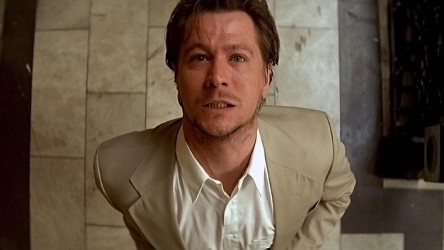 Gary Oldman as Stansfield gave a production that must be seen to be believed. If Natalie Portman hit it out of the park as Mathilda, then Oldman hit it out of the universe with his performance. Many have criticized his now almost forgotten effort as too over the top, to which I say, No way! The portrayal of Stansfield was not too over the top, it was just closer to perfection than any other actor could have done, anytime, anywhere. The DEA man was a bad cop, a very bad cop who unfortunately for cops and crooks alike, was in a high operational position in the DEA. His fearless and drug-fueled rampages and rants were a spectacle to behold as he terrorized everyone in sight, especially his own enforcement team. He methodically murdered an entire family, including a 6-year-old little boy, while jerking spasmodically and humming Beethoven. That’s pretty Ruthless if you ask me. 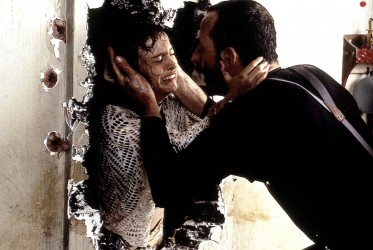 I’ve tried to avoid plot spoilers but there was one issue that I would like to address. There have been several references to Leon being a love story between an adult and a child, CP, creepy, inappropriate for American audiences and so forth. The original film that was aired in America was unwatchable. There are certainly references to love and sex, mostly made by the beautiful and precocious Mathilda, but there was absolutely no inappropriate behavior in the film between these to individuals. It was all handled tastefully and appropriately and tied together beautifully in the original, uncut version.

Leon: The Professional is one of those rare films that was virtually perfect in every respect. It is ranked in the IMDB top 50, but is still horribly underrated and underappreciated. This masterpiece definitely belongs in my Top 20, if not Top 10 films ever made. The music, the cinematography, the painstaking character development and the incredible acting make this DVD one to own and cherish.

Leon is a solid 10/10 and highly recommended.

DVD, Extras, special features etc. There really are none, no commentary really nothing but static files and a trailer. The key is that the International version contains the entire original film.