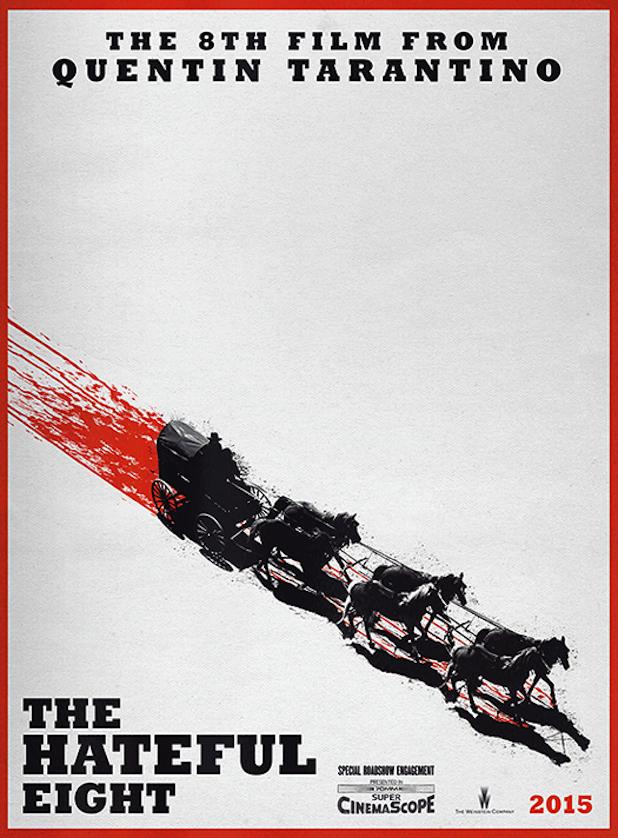 In a blinding snowstorm in Wyoming, even at a familiar place, who do you trust?

It does not take a lot in this day and age for me to have my faith in humanity degraded if not destroyed. I want nothing to take away from my review, but I cannot help but comment on how many negative reviews this masterpiece received from the hordes of titty-babies who were offended by the film’s length, its gore, and the prolific amount of racial slurs. Let there be absolutely no question about The Hateful Eight, it is a masterpiece and a testament as to why Tarantino is a genius and the human race is composed of racists and Idiots.

Some of the negativity is undoubtedly just targeting Tarantino for his controversial statement about our beloved police forces. Others complain that Tarantino copped the story line from a 1950’s Western series on TV. Fine, “Good artists copy, Great artists steal”-Pablo Picasso. For those who proudly proclaimed that they walked out in the middle of this movie I can only say, “your loss” as movies are comprised of the entire movie, a novel but basic concept. All I can say for the detractors, keep your bar low and go see Star Wars for the fifth time. 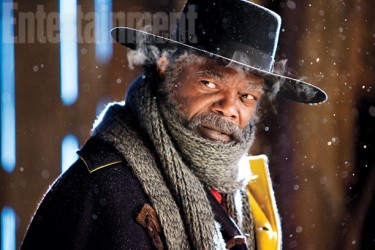 The Hateful Eight gave you the illusion of a big, sprawling Western, replete with the beautiful and hauntingly appropriate score from the great Ennio Morricone. The movie’s setting and dark tone was reminiscent of The Great Silence, and the fateful meeting of the bounty hunters at Snow Hill. This was not a Western though, as the compass of this movie pointed clearly North and South, not West, and uncovered the residual ugly racism ,still very prevalent today,left over from the War Between the States.

This film had one of the best opening credit sequences since Once Upon a Time in the West. This was Wyoming in the dead of winter and everywhere was the snow covered landscape. We then saw the closeup of a carving of the crucified Jesus, which was also snow-covered and quite forlorn. The opening credits rolled as the six-horse stage was moving slowly through the frame for what seemed like forever. Then we heard the score of Morricone. Don’t be late to your seat, as this opening scene set the tone for the great experience that was about to unfold. 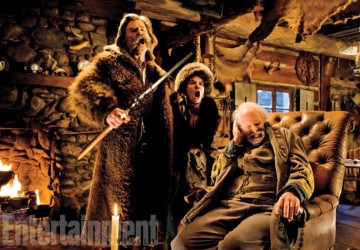 The stagecoach picked up five unscheduled passengers, two alive and three dead as the plot was unfolded in excruciatingly short quips. The Tarantino dialogue was protracted, almost unbearable in its mundane simplicity for the first 100 minutes, as he did not hesitate to make you wait for the payoff of his craft. The suspense was stretched to the limit before the bullets began to fly, and they did fly.

The aforementioned stagecoach was transporting James Ruth (The Bounty Hunter) and Daisy Domergue,the latter being a notorious gang member who had a date with a rope in Red Rock. The two living hitchhikers were Major Marquis Warren, also a bounty hunter, played by Samuel Jackson, and the new Sheriff of Red Rock, Chris Mannix, played brilliantly by Walton Goggins. With the blizzard closing in, the stagecoach stopped at Minnie’s Haberdashery, but it was immediately apparent to the Major that something was not quite right.

Minnie and her crew were gone visiting, and the Haberdashery was left in the care of an unfamiliar Mexican, Bob, and three other strangers also caught in the storm. Like Reservoir Dogs, The Hateful Eight was shot almost entirely at one set. The drafty and cold Minnie’s Haberdashery, with its creaky floors and looming rafters, looked huge though with the 70mm format, but this place was destined to become nothing but a gory tomb. It is here where Tarantino worked his genius and with the movie loop-back to Minnie’s earlier in the day, the shocking truth was about to be revealed. 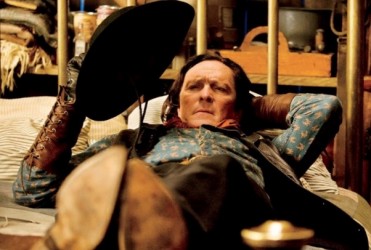 As you might imagine, the movie was rich in symbolism and allegory and not shy with the political content. The hauntingly eerie crucifix adorned in the white snow could be seen as emblematic of our religious, white society. Daisy could also be symbolic of the religiously driven plight of women in our society, as throughout most of the movie she was shackled, beaten, bloody, dragged around, and treated worse than the horses.

The characters in the movie could represent our demographics in the United States and the obvious racial festering sore than has not healed, even though the War Between the States has been over for 150 years. A more visible and practical symbol was that “whore of a door” that was broken, even though it was working perfectly earlier in the day, a recurring symbol that there was something terribly, terribly wrong at the Haberdashery. Of course, without getting into major spoilers, the biggest symbol was the Lincoln Letter and the relationship between white and black men. 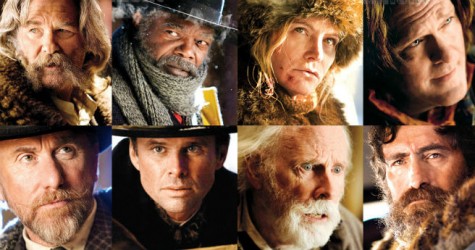 Samuel Jackson was a supporting actor in Django Unchained, but he was the star attraction in The Hateful Eight and he delivered nothing short of a tour de force. Kurt Russell was his magnificent self and was absolutely perfect for his part as the gnarly, Yosemite Sam mustached Bounty Hunter, who trusted no one. Madsen could be viewed as underutilized, but fit in perfectly with the story. Other than Jackson, the actor who really shined was Walton Goggins, who was the flip-floppy sycophant Sheriff to be of Red Rock. Just like his racist persona in Django Unchained, Goggins played the Johnny Reb Cracker till near the end, but what did he do when the chips were really down?

Does racism trump everything, even your own best interests? I won’t say any more. I also must mention Jennifer Jason Leigh, the condemned Daisy Domergue. Throughout most of the movie she was just a prop to be dragged around on a chain and beaten, but she absolutely owned the last scene in the movie and that is a bold statement considering the award-worthy performances of Samuel Jackson and Walton Goggins in the same scene. 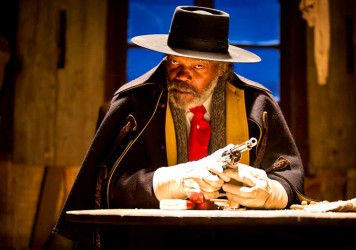 This film was the ultimate Black Comedy. Yes, it was gory, but combined with the dialogue and character development, it was perfect. I have never enjoyed gore more, and never once did I wince. I was laughing too hard in spite of the exploding heads and severed limbs.The tears in my eyes were the tears of joy and the savoring of the perfection of the ending scene. What initially was just pedantic dialogue, exploded into relevance after the critical scene with Major Warren and General Smithers. This scene was the pivotal point in the movie and was sheer genius.

There was no greater Troll than what Sam Jackson did to Bruce Dern in this movie. It was absolutely spellbinding in spite of the unsavory content, as Tarantino pushed the stereotype of Black sexuality further than anyone can possibly imagine. Jackson is a god of acting, as he methodically inflicted a lethal dose of emotional damage to his Civil War adversary, unmercifully goading him to his demise. I won’t spoil it, you will just have to see it to believe it. All I will say is that Samuel Jackson knows how to tell a story.

The Hateful Eight is a splendid and unholy blend of dialogue and violence. It is unmistakably Tarantino, so it will and does have its fanboys and detractors. The cast is familiar and so is the characteristic audacity. The bullets blast away bone and blood and the words are equally as devastating. The Major is a nigger, the woman is a bitch and the door is a whore. If you are offended by these concepts in the framework of a movie masterpiece, then just stay away. If you enjoy movie perfection, this one is for you.