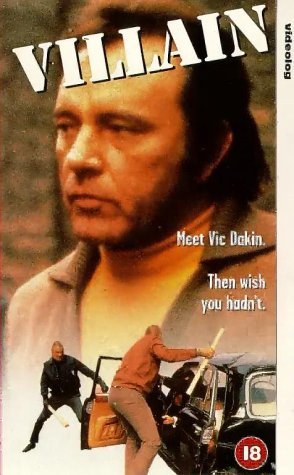 When a heist goes wrong, the vicious and sadistic Vic tries to pull the loose ends together no matter what the obstacles.

Villain (1971) How about an obscure British movie starring the great Richard Burton and fantastic (and very young) Ian McShane? Never heard of it? Me either, but if you can catch a copy of this somehow, you won’t be sorry. Burton plays the sadistic and murderous gang-leader Vic Dakin. Vic has a few issues and these issues are bad news for just about everyone around. This does not include his Mum, who he lives with and adores.

Vic is also a raging and violent homosexual, both of which passions he often takes out on Wolfe (Ian McShane), his boy-toy. Wolfe is a small time thug and pimp and often blackmails British men in high places for their political favors. Sound intriguing? It is and was, and this movie was decades ahead of its time. Superior dialogue makes this film gritty and very British.

Acting on a tip from a disgruntled insider, Vic decides to rob a factory payroll, the sooner the better as the factory will soon be upgrading security to armored cars. This type of heist is a little bigger than Vic’s usual extortion, blackmail and intimidation racketeering, so he calls in some extra help. The actual robbery goes badly and even though they got the goods, there are many loose ends to be remedied, and the balance of the movie involves Vic and company trying to make a clean closure while being dogged by a couple of pretty competent and relentless Scotland Yard Cops. The hoods did not hesitate to blackmail people in high places for alibis, while intimidating and terrorizing others. as Vic would stop at nothing to get the missing cash.

As you might imagine, Richard Burton dominates and fails to disappoint with his extraordinary acting skills and scintillating word-smithing (like Peter OToole, he never won an Oscar!), playing the psychopathic hoodlum to the hilt. Unrepentant, arrogant and confident until the end, Burton’s character sets the stage for a series of subsequent British-cockney gangster movies. Villain contains violence, sex, nudity, controversial sexual situations and other depraved goodies to make it extremely watchable.

Villain had a great and almost troublesomely haunting musical score, a realistic setting in the grimy-70s London’ and just what can be characterized as an attitude of privilege and violence. In spite of being make over 45 years ago, the sexuality and homosexuality were not sugar-coated or cloaked in the least. There were no explicit sex scenes, but this was just 70’s Britain stuffed full of unsavory and dangerous characters. Villain is under-rated and tough to find, but certainly worth a watch.