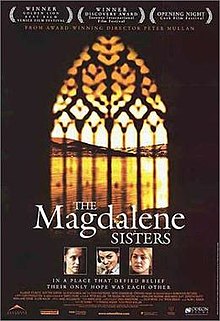 Three young Irish women struggle to maintain their spirits while they endure dehumanizing abuse as inmates of a Magdalene Sisters Asylum.

I don’t need a movie to tell me that the Catholic Church is completely fucked. [EDITOR’S NOTE: Today’s date in 1985 marks the first time that contraceptives were legalized in Ireland] I long ago accepted that priests preferred the bung hole to the Sermon on the Mount; nuns were repressed cunts in need of good shag, and the Pope was little more than a CEO for Christ who probably deserved to get shot. I am never shocked, therefore, when I watch a film that depicts the Church and everything it touches as vile, corrupt, and perverted. And so we have The Magdalene Sisters, one in a long line of films that gives us the real role of religion in our lives – sadistic control, mind rape, humiliation, and rank hypocrisy.

There isn’t a sympathetic Christian to be found in this film, which is as it should be given that I’d rather room with a schizophrenic cannibal than a man who claims to speak for Jesus. Is it one-sided propaganda? You bet it is, but I’ll be damned if it isn’t right on the money. 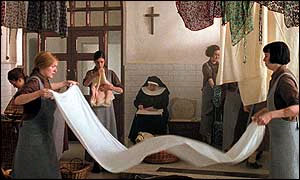 The film is based on a true story, although the characters are composites rather than direct portrayals. The story concern three girls – Bernadette, Rose, and Margaret – who are sent to a convent (known as a “laundry,” given that the girls scrub clothes all day long) because they are deemed “sinful,” which in 1964 Ireland means that sex might cross their minds once every two or three years. One has had a baby out of wedlock (and is forced to give the child up for adoption only hours after giving birth), another has been raped by her cousin (which for Catholics means that she is completely at fault), and the other is guilty only of flirtatious glances, which makes her a temptress in the eyes of society.

The girls are stripped of their vanity (the pretty one gets a sadistic haircut), pounded into submission, made to feel worthless and alone, and are not allowed to speak unless given permission. In other words, their lives in the convent are similar to those young men and women who currently inhabit our armed forces. Nuns roam the halls with switches in hand, ready at a moment’s notice to smash the legs, backs, and heads of disobedient young tarts. Do not think for a moment that the abuses inflicted by the nuns have to do with anything other than sexual gratification. Outside of a cucumber lifted from the mess hall or a bony, arthritic digit from a fellow sister, these women of God have little exposure to carnal delight. Violence is their G-spot.

The film, while powerful, does proceed largely on familiar ground, especially in terms of character. We have the pretty, rebellious one, the nutty-as-a-fruitcake one, the quietly determined one, and of course, the one who is forced to suck off the visiting priest. And we follow their adventures and challenges to authority, half expecting Angelina Jolie to show up with a quip or two. Call it Nun, Interrupted. There are escape attempts, a seduction of a dimwitted delivery boy in an attempt to secure a key, a near-suicide, and a returning escapee who is beaten and transformed into an obedient nun in her own right.

And needless to say, the girl who sucks cock also has a child on the outside and in the end, is sent to a mental hospital after she exposes the perverted padre at an outdoor gathering. In that scene, which I found to be too slapstick to be true, the priest strips naked because of a poison ivy rash that was inflicted by a practical joke committed by one of the girls. Right at that moment, the crazy-as-a-loon girl exposes her genitals because she too has the rash, no doubt caught when she had an assignation with the priest. The scene is far too light to be in this film, which usually insists on being a serious moral lesson. There are also scenes showing the head nun counting money, which should surprise no one unless you are inclined to believe that this God business was ever about helping people. 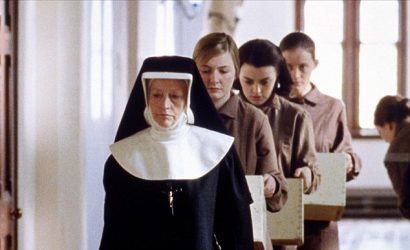 The Magdalene Sisters, then, adds to an impressive legacy of films, books, and television specials indicting Catholicism and the conspiracy of silence regarding rampant abuse within its walls. And yet, despite the familiarity, I was smiling through most of this film, as I never tire of watching the “godly” squirm about in sweaty embarrassment. The church has practically run Ireland for centuries and finally we are allowed to see the results of such theocratic rule.

Mix religion and the state and in all cases, you will get far more perversion than secular societies, and more often than not the most pious will push their cocks the deepest. We are at a time in world history when it is vital that the religious be forced to live in shame and fear, rather than the intellectual and rational, who have been forced to apologize for too long. Cut people off from their desires and their minds, and they will descend into the most bizarre forms of mental illness — of which faith is the most glaring example.