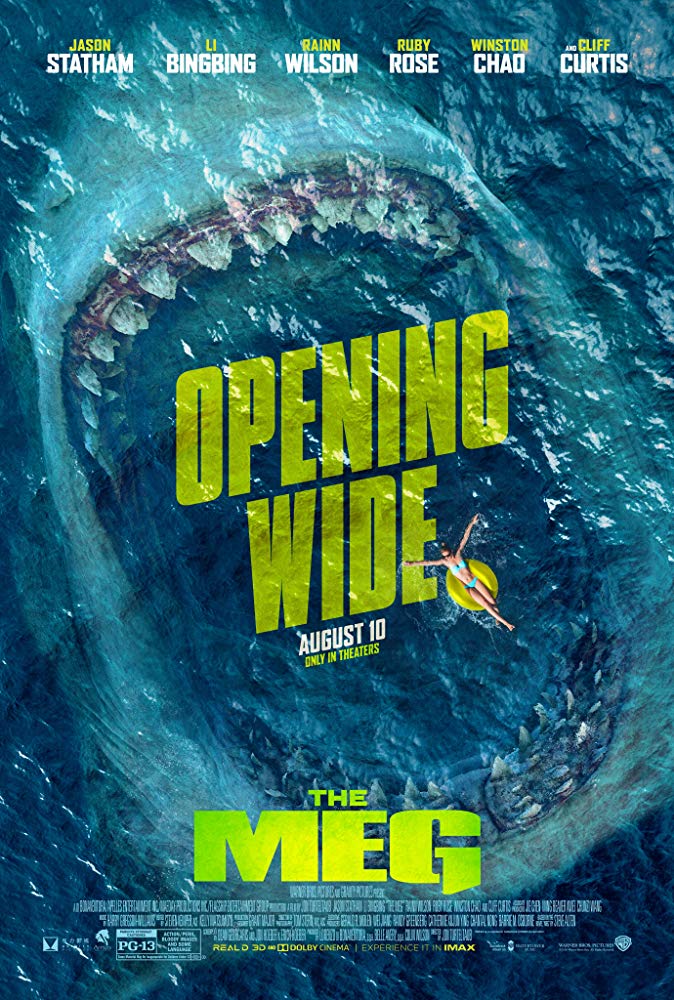 Am I a bad parent for taking my six year-old to see The Meg? Maybe. In my defense, he really, REALLY wanted to see it. I am not saying it is a good defense, just a defense that is slightly more effective than that of the Cleveland Browns. Hi Clevelanders. At some point, every parent decides when to let their kids watch their first scary movie and I decided to let my kid watch Jaws months ago. And Jurassic Park (and all the sequels) a few weeks ago. So, when my son saw a preview for The Meg after watching videos on YouTube Kids featuring fake Megalodons (eighty-foot, prehistoric sharks), the only real decision was choosing between coke and cherry for our flavor of Icee.

(Note: Coke is the correct answer.)

Writing a full review of The Meg is far more than it deserves. There is a reason why nobody reviews SyFy channel monster flicks. Those films are stupid on purpose and made on a budget little more than a high school kid’s allowance. And good for SyFy. Obviously, people watch these *ahem* films and enjoy them, so you do you, SyFy (though I am still mad at you for giving up on the excellent The Expanse which, thankfully, Amazon snatched up to continue producing). The Meg is absolutely the same quality as those shitty monster flicks, but is getting a full review because a bunch of film studio executives bet $150 million dollars that those same fans will show up to the theaters in droves and that a billion people in China are willing to set their money on fire. It really is a shame that the idiotic tariffs imposed by our idiotic White House administration did not prevent this film from showing in any theaters.

This is the high-water mark of special effects in this film.

Alas, it will show in theaters and we had the unfortunate opportunity to view it in an Imax. Imax – where it is not just mind-blowing visuals and earth-shattering sound (their words, not mine), but where stupid is amplified to brain-melting levels (my words, but you know they are thinking it). I was prepared to accept some Deep Core levels of bullshit in this film, but I was not prepared for “the ocean floor is actually a cloud.” Yeahhhhhh. You can hear your brain draining into your throat now, can’t you?

(SPOILERS ahead, which is exactly what this film deserves.)

Billionaire Jack Morris (Rainn Wilson) has funded a billion-dollar, underwater research facility. The scientists employed by Morris hypothesized the cloud-floor idea and have decided to send a submersible with three people to test the theory by diving through the ocean floor rather than sending a probe or something first. You know just in case the floor really is a floor. And that was the best depiction of science in this movie.

I signed up for deep-sea clouds?

Once through the cloud, the explorers discover a full-blown ecosystem of life. Twenty seconds later, the submersible is attacked and crippled by a Megalodon. Trapped on the real ocean floor (which is inexplicably only a couple of hundred feet below the cloud) the explorers have twelve hours or so to live. On the station, Mac (Cliff Curtis) and Dr. Zhang (Winston Chao) decide to bring in the best deep-sea rescuer they know, Jonas Taylor (Jason Statham). Yes, that Jason Statham and he is no Ian Ziering. Also, Statham never gets in a kick fight with the Meg, which is arguably the most disappointing thing about this movie.

Jonas quickly hops into another sub and, racing Dr. Zhang’s daughter, Suyin (Li Bingbing), reaches the crippled sub. And is attacked by the Meg. But not before Suyin is attacked by a giant squid. Oh man, if this movie had been the Meg versus the Squid versus the Statham, I would have had so much more fun. What was I saying?

We did not even get a chance to know you.

Science. That is what this movie is really about. Using smart-words to make the bullshit they are slinging sound slightly less plausible than the nonsense spewed by Flat-Earthers. An absurd amount of time is spent trying to explain everything we are seeing in a movie featuring giant mythical creatures trying to eat people, including that the reason the Meg stayed below the cloud was because the cloud was cold. We do not care and, holy crap, that might be the dumbest possible explanation short of the Meg being cross-eyed. Update – the Meg is not cross-eyed. Bring on the blood bath. Wait, you are right – my son is there. Bring on the not-too-much-blood bath.

After the Meg discovers the permeability of clouds, it races to the surface of the ocean and does not immediately die of the bends. Also, neither do any humans. The Meg starts destroying boats, as sharks do, so the humans decide the best course of action is to jump on a boat and chase it. This chase goes on until the end of the film, as well as through the most crowded beach and waterfront you will ever see (imagine seven thousand people in inner tubes, all touching) until Statham slashes the Meg in the stomach with his submarine, then pokes the Meg in the eye.

Like that game where you try to fit as many Skittles in your mouth as possible.

As terrible as this movie was, I was primarily concerned with keeping an eye on my son rather than my eye on the screen. Had we been in a non-Earth-shattering-sound theater, I would have been less concerned, but my son spent age four and five covering his ears around toilets that flushed loudly. Like most six-year olds, he hates loud sounds (except the ones coming from his own mouth – what is that about, anyway?) and scares easy. I asked how he was doing at every worrisome moment in the film (there were maybe five) and I was prepared to walk out of the theater if he gave me a thumbs down. In short, we saw the whole film and I am definitely more scarred from it than he. Now I just need to scoop up the rest of my grey matter before I get the bends.

Rating: Don’t ask for any money back because you already set it on fire.