Home / Christmas Movie Reviews / The Nutcracker and the Four Realms

The Nutcracker and the Four Realms

The Nutcracker and the Four Realms

Exploring Narnia after the Nutcracker sharted on it.

A couple of weeks ago, I spent the better part of eight days wandering around the various parks of Disney World. The average temperature there this time of year is low-to-mid 80s, but we were lucky enough to experience low-to-mid 90s because climate change is fake news. Toss in some legendary humidity and now you know where the phrase “swamp ass” comes from. Ohhhhhhh, Florida.

The night before Halloween, I experienced a different kind of Disney misery, this time in the form of their latest live-action movie The Nutcracker and the Four Realms. Given a choice between sitting through that film ever again and spending eight days sweating from my nuts, I’ll choose the one where I can buy churros at any time. I do not want to have any more kids anyway.

The Nutcracker and the Four Realms is what you would get if you smoked a bunch of weed and tried to reverse-engineer a Disney ride based on a movie, but without ever having seen that movie. Loosely based on a short story written in 1813 by E.T.A Hoffmann, the film imagines the four realms (Flower, Snow, Sweets, and Amusements) as a tiny place torn by war, populated by peoples who began existence as toys. Picture Narnia if a pre-school threw up all over it and its people. 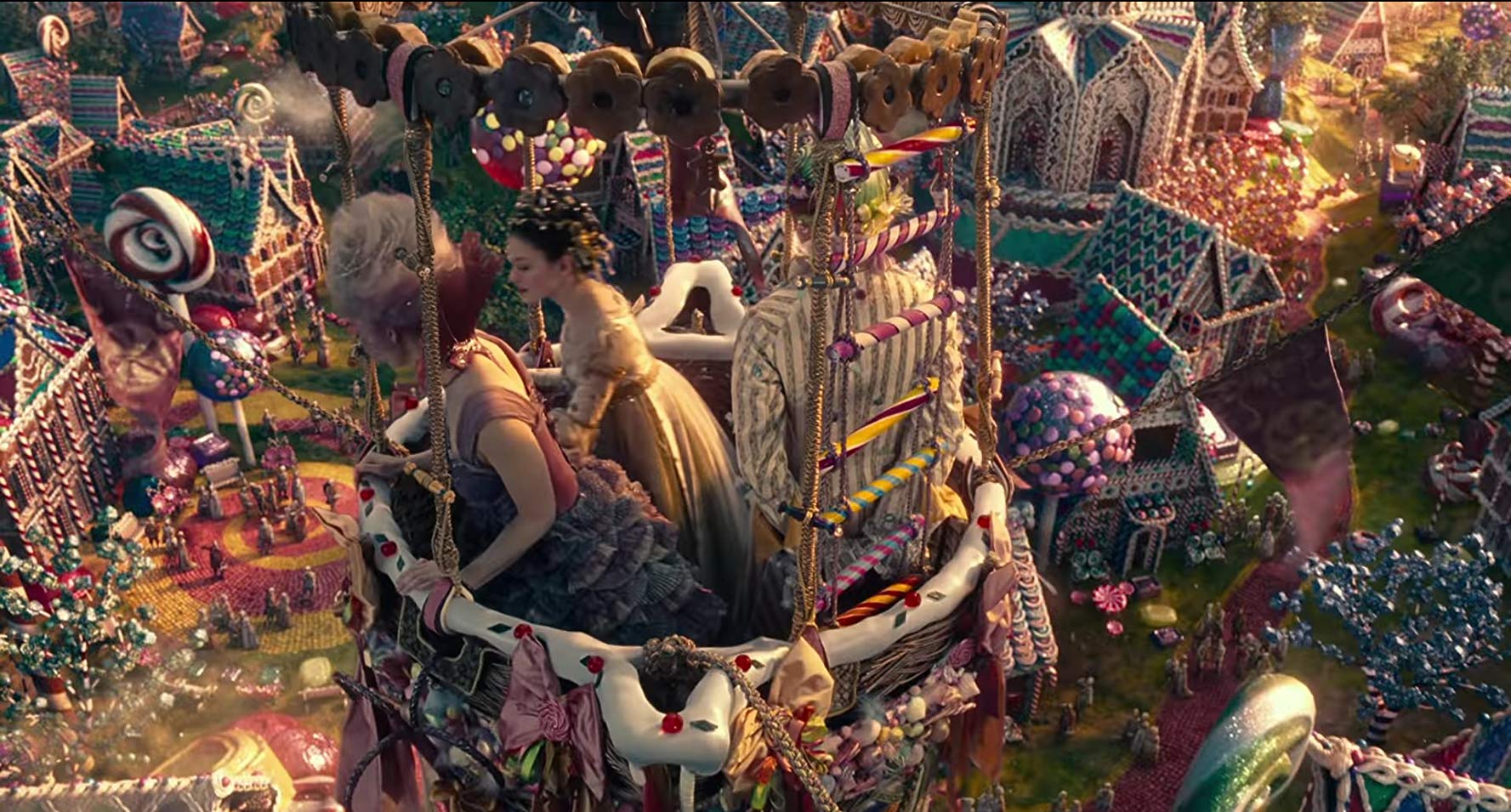 I think I am going to be sick.

Clara Stahlbaum (Mackenzie Foy) is our teenaged protagonist who will make you rethink parenthood within ten minutes of the start of the film. If you were unfortunate enough to have seen A Wrinkle in Time, Clara is easily as loathsome as Wrinkle’s Meg, but wearing late-1800s clothing. Like most Disney princesses, Clara’s mother is dead, giving Clara an excuse to be a complete asshole to her grieving father (Matthew Macfadyen) and pretty much everyone she meets throughout the film. Ohhhhh, teenagers.

Prior to attending a Christmas party at her godfather’s house (Morgan Freeman), Mr. Stahlbaum gives his three children gifts from their late mother. Clara receives an ornate egg that can only be opened with a special key, but the key is missing. At the party, Clara asks Drosselmeyer (her godfather) to help her open it, but he just shrugs his shoulders and assures Clara that she will figure it out. Little does Clara know, Drosselmeyer has hidden the key at the end of a rope that she must follow that leads her to the four realms. And, follow it she does. 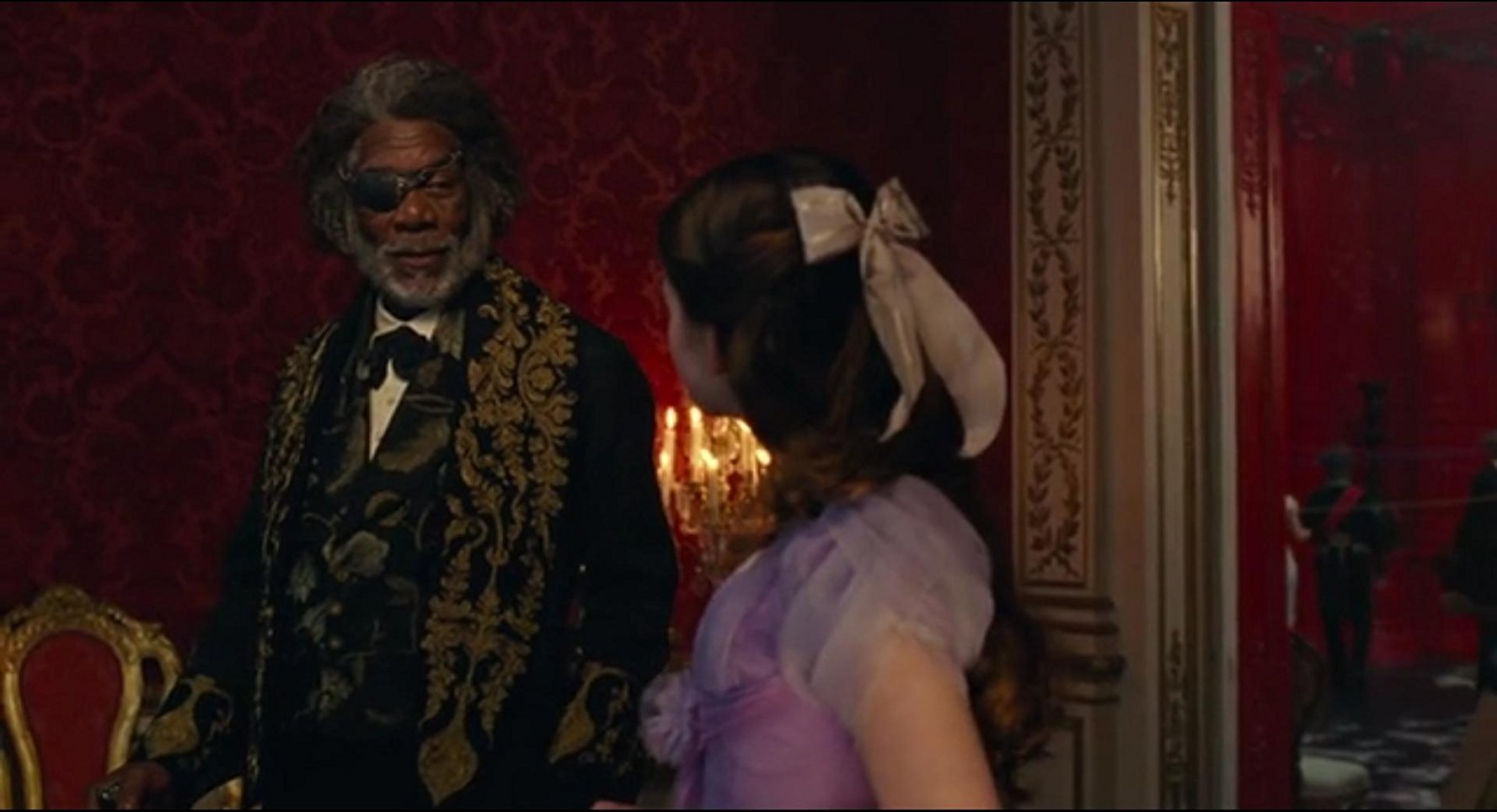 If I told you anything, I would have to kill you.

Once in the realm, Clara meets Philip (Jayden Fowora-Knight), the last remaining Nutcracker soldier in the realms, after chasing a mouse that stole the special key. Upon introducing themselves, Philip informs Clara that she is the princess of the four realms, Clara’s mother being the former queen. After a quick skirmish in a dark forest, Philip whisks her away to the palace where she meets the regents of three of the four realms. You can completely disregard the regents of Snow and Flowers, as the movie had no interest in developing either of them beyond costumes. The third regent is the Sugar Plum Fairy (Keira Knightley), a character as irritating as athlete’s foot, but not as fun.

After a bunch of pomp and circumstance to welcome Princess Clara, Clara is treated to the single decent scene of the entire movie – a ballet (featuring Misty Copeland) explaining the current situation of the four realms in dance, but also unnecessarily narrated by the Sugar Plum Fairy. Maybe it was my imagination, but it seemed Copeland was as visibly annoyed as me at having to listen to Sugar Plum’s grating voice. Later, everyone keeps talking about the ravaging of the war and fretting about the impending destruction of all the land at the hands of the fourth regent, Mother Ginger (Helen Mirren), despite zero evidence of any kind of war. At this point, I was desperately hoping Mirren would swoop in with a fantastic villain and redeem the remainder of the film. Ohhhhhh, optimism. 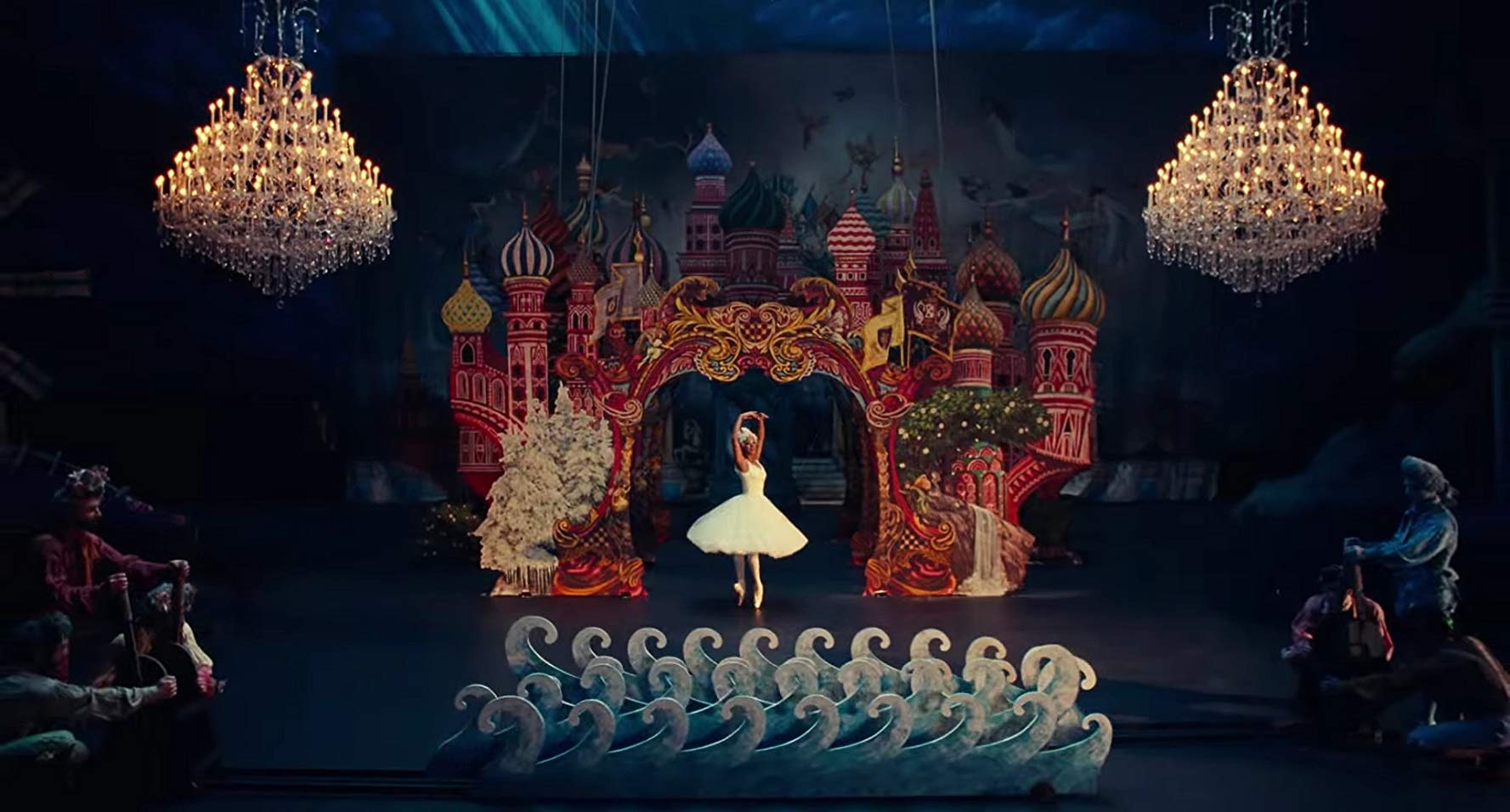 The one tiny ray of light in this mess.

Because the filmmakers seemed only interested in visuals and costumes, we were left with all kinds of basic questions, including WTF. Why is everyone at war? Where is the war? Why is there only one Nutcracker? What is the relationship and history of any of these realms? If Clara’s mom brought all of the toys to life (which is why she was queen), where did she get all of the toys? Why isn’t Drosselmeyer there helping, since he obviously knows about the realms and has been there? Why didn’t Drosselmeyer or Clara’s mother bother telling Clara anything, despite both of them deliberately putting Clara into the position of rescuing the realms? Why didn’t Clara’s mother explain to the toys why she was leaving? Where are the people in these realms? There are also all kinds of plot holes exposed when the big (read: lousy) reveal occurs, but by then you will have drowned yourself in your soda. 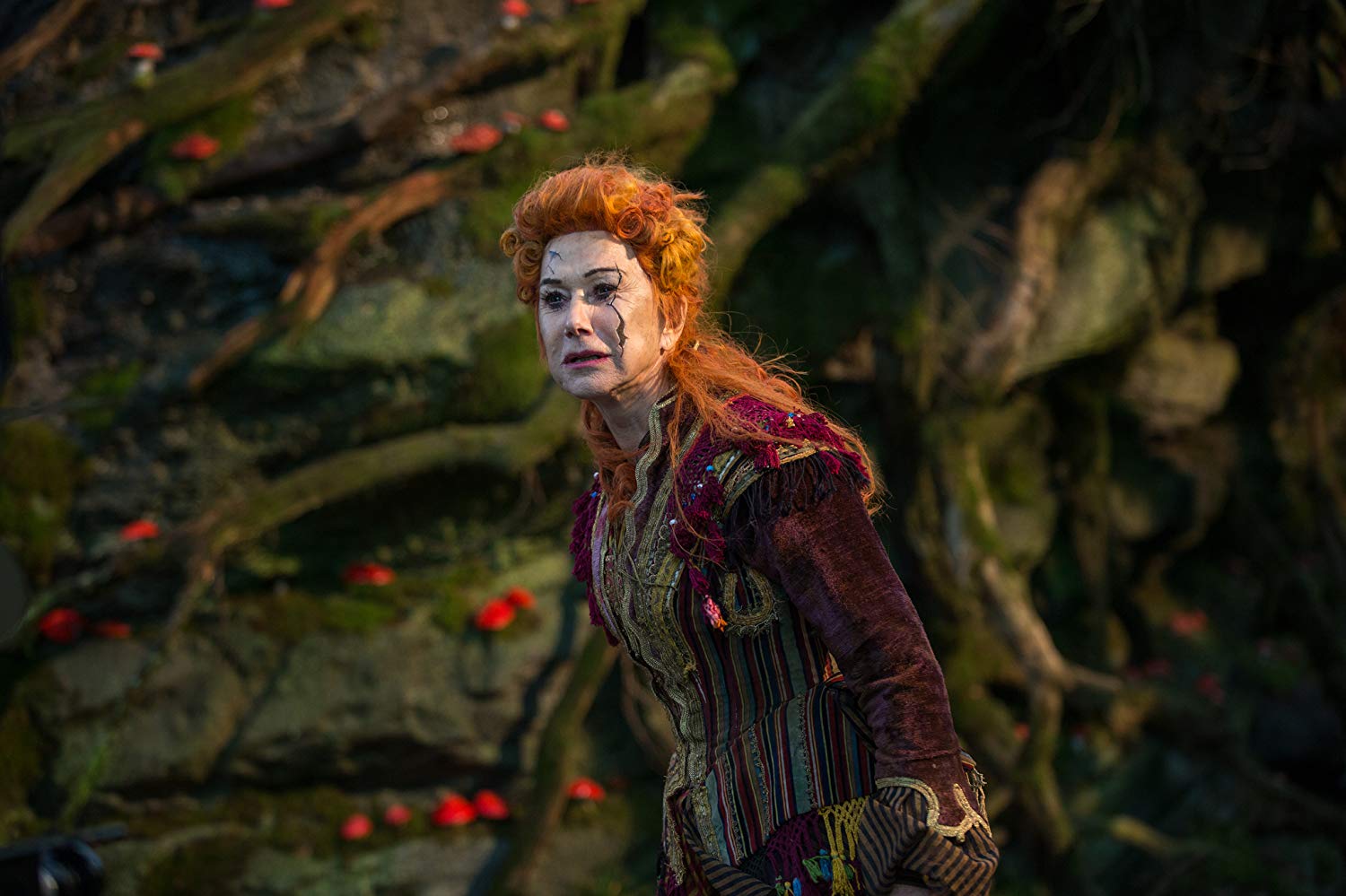 This is what I signed up for? THIS?!

I feel like I still have not conveyed the true misery of this entire film. It was obvious throughout the film that some poor editor was forced to take a hatchet to much of the original film, assuming of course that the original screenplay was more than just the message on a Candy Heart. The characters can be wholly described as either utterly useless or insipid, and the acting is best described as not-Helen-Mirren (including nearly all of Helen Mirren). In short, I would rather be hot-as-balls for a week, standing in line with too many people, all of us smelling like runny tattoos, than have to sit through this film again. Ohhhhh, Disney.

Rating: Ask for all of your money back and discounted park hoppers for Disney World. They owe us.