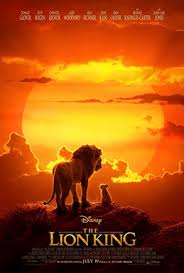 A needless remake of an iconic animated film

It is no secret that 2019 has not exactly been a banner year for movies. So now we have a Disney remake of one of the most beloved and revered classics, The Lion King. I have watched and enjoyed the 1994 animated version with the great James E. Jones and Jeremy Irons, as well as the Broadway production at the Orpheum Theater in Memphis. Both were excellent.

The Lion King 2019 is a live action remake of the 1994 animated version. It is a scene by scene rehash of the original movie with absolutely no attempt at creativity. This film was two things. A showcase for the cutting-edge technology of CGI live action, and a big cash grab. Don’t get me wrong, the technology and attention to detail was stunning. These animals looked exactly like the real live animal. This was wonderful, but at what cost? The cost was that it stripped the characters of every modicum of emotion and expression. What did not help matters at all was the lackluster and almost bored effort of the actors narrating this film.

I know that there are probably readers that are growing tired of me trashing every film I watch. This is too bad. I am tired of sitting through film after film of mindless, directionless whoring. The Lion King (1994) was a beautifully made animated masterpiece. The live action remake is the equivalent of taking the big-screen gorgeous and auditory pleasing movie and playing it through a two transistor radio with the narration done by Gilbert Gottfried. It was just that bad. No, it was worse.

The Lion King (2019) was just a blurred mimeograph of a wonderful animated film. It was a scene by scene and line by line lifeless and hopeless remake of  the original. Even James Earl Jones seemed to be just reading his lines, and Glover and Beonce’ were just horrible. All emotion was lost as the animals looked bored, expressionless, and sometimes just downright creepy.

No scene more vividly represented the shortcomings of this movie than the Hakuna Matata! Song and dance number that was so pleasing in the original animation. It was joyous, it made you want to dance and grin. The swagger, the body language of the characters was unmistakable.

Hakuna Matata! What a wonderful phrase

It means no worries for the rest of your days

Nothing. What’s a-motto with you?

It means no worries for the rest of your days

This same scene in the remake was anything but uplifting and watchable. It was sheer drudgery to watch. The entire movie was more like a documentary than a joyous remake of one of the most iconic animated movies ever. This thing could not have been any worse if they had deliberately tried to sabotage it. There was no energy, no creativity, no attempt to do anything at all other than to showcase the live action and CGI.