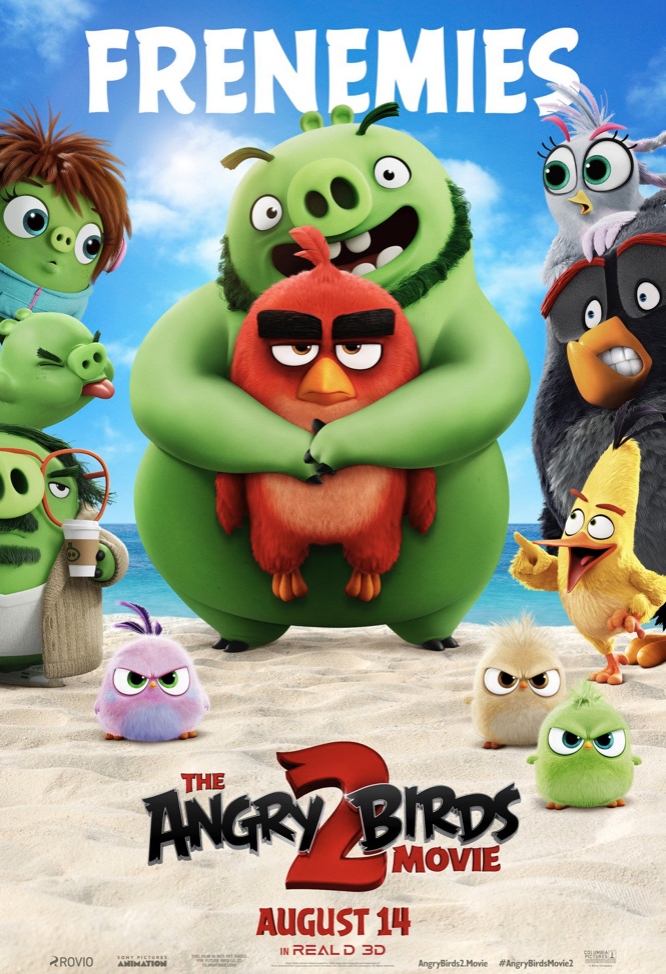 You recognize this film by the way it hits your windshield.

A hallmark of a good PG movie is an ability to appeal to both kids and adults. Smart writing and mature jokes for the adults; smart writing, bright colors, and silliness for the kids. Pixar has mastered the art of blending all of those things together. Look no further than Toy Story 4, a movie about a talking spork. Then, you have Sony Pictures Animation, who apparently have never seen a Pixar movie and are still trying to get it right. They did a great job with Spider-Man: Into the Spider-Verse (with an assist from Marvel), but also foisted The Emoji Movie on us. Unfortunately, The Angry Birds Movie 2 is far more Emoji Movie than Spider-Man.

What makes The Angry Birds Movie 2 so bad is that it lacks any kind of coherence. My son goes into some plot detail below, but he leaves how many things that happen don’t make any sense. For example, when the birds and piggies are trying to sneak into the eagle’s super weapon, they need Bomb to distract the guards. The very next thing we see is Bomb and a bunch of eagles drinking in a bar together. Umm, huh? In another scene, there is a random dance-off. Then, there are the times when a difficult problem is simply taken care of off-screen. Or when the islands inexplicably move closer, to the point that they are visible to each other by the naked eye (kudos to my son for noticing that one). Or doubling down on the worst characteristics of characters (Mighty Eagle being an idiot and coward; Bomb being an idiot and eating weird things like pig snot and dirt). Or not using anything that was set up earlier in the film or franchise (piggy gadgets introduced to help them on their quest or Chuck routinely forgetting that he is really fast).

In short, The Angry Birds Movie 2 is a film so terrible my wife fell asleep for half of it (which is amazing given how much trouble my wife typically has sleeping in normal places, let alone a loud theater). I too was very disappointed in this film, laughing at parts that were only funny in the most basic and obvious of ways, not because they were good or clever jokes. Now, let’s find out what a seven-year old thought about it.

If you could describe this movie with one word, what would it be?
New. Because the third island is actually kinda new, because they never saw it before. So it’s kinda new. And the movie is a new movie.

There’s a third island? What are the first two?
Bird Island and Piggy Island.

Those are from the first movie?
Yeah.

Well, who lives on the third island?
Eagles…Eagle Island!

So, tell me about Eagle Island. What’s it like?
It’s like a giant mountain, and part of the mountain has this cannonball shooter. The Something Weapon that I don’t remember…the Super Weapon! That shoots out lava balls…made of ice…and it inserts lava IN the ice balls. They shoot them out, and it hits either Bird Island or Piggy Island.

So are they shooting at Bird Island and Piggy Island on purpose?
Yeah.

Why?
To destroy the island….and then take over the island.

Why do they want to do that?
Because it’s really cold at Eagle Island, and they need a warm place.

Okay. So why don’t they use the lava to heat up Eagle Island?
Well, it’s just in one place….it’ll flood the whole building….and it’ll kill all the eagles. Because lava kills people.

Who is the leader of the eagles?
Mighty Eagle’s girlfriend. Zeta.

Mighty Eagle has a girlfriend?!
From when he was younger.

So what did you like about the first Angry Birds Movie?
That it was…..um……ummmm….that it was funny. And kind of realistic. Kiiiiind of.

Would you say the second movie was funny and realistic?
Yeah, because it has a lot of textures.

You mean in the animation?
Yeah.

So, the animation was really good. Was it as funny as the first movie?
No.

What are the birds and piggies doing, now that they’re being shot at by Eagle Island?
They take this really small submarine…..and THEN, they push a random button and THEN [jumps high on the couch] there’s a huge part under the submarine!!

Are the same characters there?
Most of them. There are new ones.

Who’s your favorite new character?
…this is going to be a really funny answer. You can probably guess this one. …Mighty Eagle’s girlfriend! Zeta!

Why is she your favorite?
Because her daughter has Queen Whatevra’s voice from Lego Movie 2. And thatâs why I like her. And Zeta was really funny and weird looking.

So are the birds all angry?
Well, SOME of them. Because eagles are birds.

Is Red still really angry?
Yeah. Because he’s an angry bird…and that’s the title of the movie.

Is he also funny?
Kiiiiiiind of. Funny from the first movie. But not so funny in the second movie.

Are there any new angry birds?
The hatchlings.

Was Silver a good character?
Yeah.

Why?
Because she plays Jinx. She’s really smart and cool and creative.

Who is Gary?
Gary is a butler from the leader of the pigs.

What’s your favorite thing that happened in the movie?
The giant submarine. [sings] the yellow submarine!

Do you wish there were pigs that look like the Beatles in the yellow submarine?
That would be funny. And ridiculous.

Which movie did you like more?
The second. …Because there are new characters. And they were cool characters. ….ehh…I got nothing.

Do you think parents will like the movie?
Yeah.

Do you think other kids will like the movie?
For sure.

Rating: Do you think the movie is worth regular price, more price, or less price?
Just a regular, probably.

Why?
Well, just because of the animation.