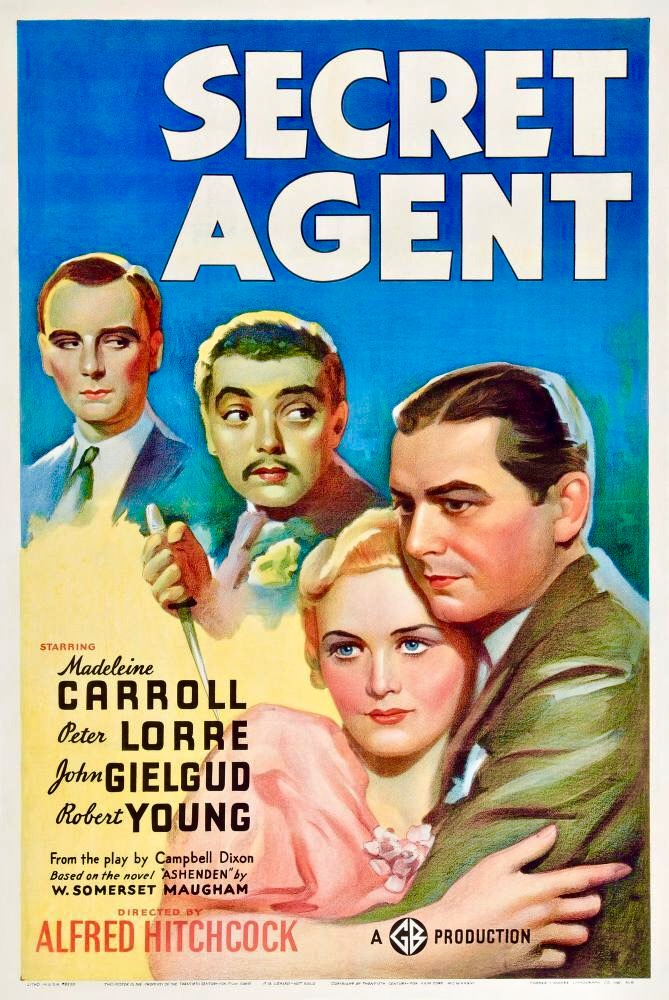 During World War One, a newly recruited British spy is dispatched to Switzerland to hunt unknown German agents.

Summary of the Concept: During World War I, a newly commissioned British spy is tasked with identifying and catching a German spy moving through Switzerland.

What’s interesting structurally about this film is that, genre wise, it almost seems like an inverse of The 39 Steps. In that film, you have a tight suspenseful thriller that breaks the tension by venturing into screwball comedy. In Secret Agent, it seems initially to be a spoof of spy films- Richard Ashedon (John Gielgud) is in over his head, and his fellow agents General Montillos (Peter Lorre) and Elsa Carrington (Madeleine Carroll) seem more interested in drinking and partying on the British government’s tab than in doing actual spy work.

Ian Fleming before Ian Fleming: The novelist Somerset Maughan had an interesting youth, serving in the British Secret Intelligence Service during World War One. Much like Ian Fleming, the creator of the James Bond novels, he parlayed this into his literary career, with a collection of stories that formed the basis of this film.

What is intriguing is to think that espionage was ever as haphazard and amateurish. There’s no vetting for the main protagonist- it’s just ‘you’re a military officer, your next assignment is to go to Switzerland and catch spies’. Some of the codes and cypher systems used by the two spy networks seem like the stuff of boy detective novels, rather than actual trade-craft. But this is a spy film at the very dawn of professional intelligence agencies, so it’s excusable.

Who is this film perfect for? Hitchcock completists. Though not his most stylish film, it still bears signature flourishes and shots that bear his indelible style. Thereâs plenty of Chekhovian guns (or Chekhov’s Daschunds, I suppose). One thing that really stands out is this is a more rudimentary version of his later style: there are a few scenes that are top notch, vivid visually, but these fantastic scenes are lost with more ordinarily shot transitions.

Who will not like this film? SPOILERS: It will seem like the character of ‘General Montillos’ is a bad and regressive racial stereotype at first, but the character will develop. Nonetheless, the film is clearly a product of 1930s England.

What works in this film? Hitchcock transitioned from making silent films to making talking films, and the use of sound is an intriguing element of his film-making that seems largely eschewed/forgotten by subsequent film-makers. Noise and silence are key elements of the film- conversations are baffled by ringing church bells, plots are foiled by fire alarms- a lot of the plot works based off of who hears what at what points in the conversation.

Is this film worth re-watching? Not particularly, it’s a journeyman’s piece. Clearly a Hitchcock film, definitely a decent film, has some stand out scenes, but overall, itâs a middling good 1930s spy film.