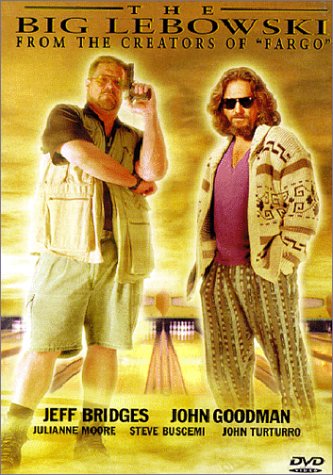 If there ever was a movie that I was hesitant to review, it has to be The Big Lebowski. Really? Is it that bad? No, quite to the contrary, it is that GOOD. The Coen Brothers, Ethan and Joel have for some time been among the GODS of directors and writers, and for good reason. The Brothers Coen are legendary for attention to detail in their movies, with gorgeous sets and cinematography.

Their visual style and the development of their stable of actors and movie characters stands alone in modern day cinema. Within their resume of delicious movies, there is one standout in character development, both major and obscure, and that movie is The Big Lewbowski. Within the magnificent performances, including another tour de force by John Goodman, we have one that towers above the rest…The Dude, an icon created and owned by one Jeff Bridges.

It is totally meaningless, if not downright irreverent and inappropriate to discuss the plot in a movie like The Big Lebowski. It is much more than a comedy masterpiece, destination or journey. It is a film about bowling, and one man’s attempt to merely enjoy his hobby, unfettered by the distractions of the outside world. The Dude wants to be left alone, but when unchecked aggression enters his life, he will stand up to it, and let the chips fall.

When the Treehorn Thugs micturate on The Dude’s rug (the one that really tied the room together), he decided to do something about it. The Dude was not alone, but joined by his virtual family in bowling, Walter and Donny. Thing escalate quickly, and not without the help of Walter, a well-meaning, but totally unhinged and over the top mental health casualty of The Vietnam War.

The Coen Brothers are masters of maximizing their cast, especially from their stable of regulars like Goodman, Buscemi and Turturro. I cannot think of another movie, Coen or otherwise where these actors and characters were exploited more fully, especially Bridges and Goodman. John Goodman is always amazing and memorable and I didn’t think he could outdo himself after Barton Fink, but he does it in The Big Lebowski. Make no mistake, however, Jeff Bridges as The Dude simply owns this movie with his character absorbing performance.

The real power of the Coen Brothers movies is their brilliant utilization of supporting characters who may only be on the screen for a short time. The interjection of Sam Elliot as the narrator/cowboy was a genius stroke of film-making technique. The same can be said for the brief, but memorable appearance of The Jesus by Turturro and the P.I. in the Volkswagon, played by another Coen regular, John Polito. Great stars like Ben Gazarra and Phillip Seymour Hoffman appeared as almost cameos, but their impact was unforgettable.

Even powerhouses like David Huddleston, who was the Big Lebowski and Julianne Moore, who was Maude Lebowski, were only supporting players in this Coen masterpiece. When you add up the brilliant and infinitely quotable script, the impressive cast of top-notch actors…and the always lush cinematography by the great Roger Deakins (especially those bowling dream sequences!), you are treated to one of the Coen’s best.

The Big Lebowski is so much more than just a great movie or hilarious comedy. It is a film that shows its creators at the very top of their game. It is a movie that demands multiple viewings, not to understand what is happening, but to savor the delicious excellence of one of the greatest movies ever made. Fargo got all the acclaim and rave reviews, but The Big Lebowski is the Coen’s best, and that’s more than just like my opinion, man.

Quotes and One-Liners, The Best Of The Best. If you think this list is excessive, Yeah, well, you know, that’s just like, uh, your opinion, man.