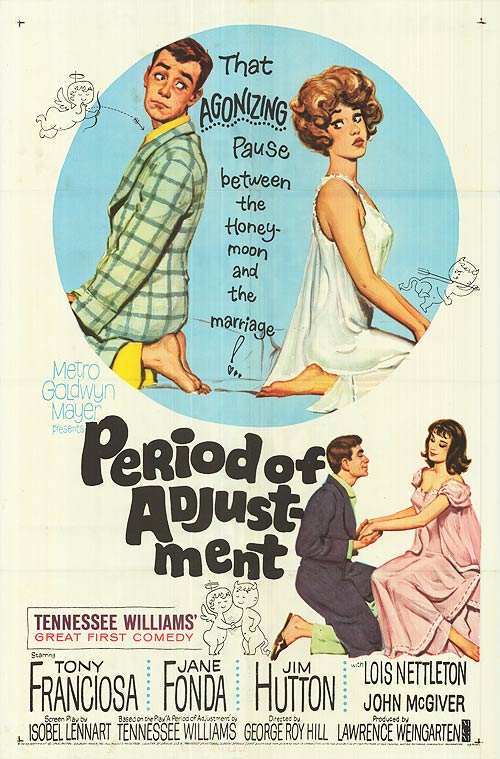 A Newlywed’s Honeymoon is interrupted.

Tennessee Williams is undoubtedly best known for A Streetcar Named Desire and other Southern tragedies like The Glass Menagerie and Cat on a Hot Tin Roof. His is not a name that many would associate with warm, often comedic Christmas movies like those of, say, John Hughes, Chris Columbus, or even Frank Capra. Still, his 1960 play A Period of Adjustment became the basis for the feature film debut of director George Roy Hill (who went on to direct classics like Butch Cassidy and the Sundance Kid and The Sting), a Christmas comedy that has been unfairly forgotten in intervening years. Period of Adjustment is not only charming, funny, and genuinely moving, but surprisingly ahead of its time with its insights into sexuality and gender roles.

The movie opens with a dialogue-free montage detailing the meeting and courtship of Isabel (Jane Fonda) and George Haverstick (Jim Hutton) in an army hospital where Isabel treats George for a shaking disorder he developed during his time in the Korean War. The sequence is reminiscent of the opening of the Pixar movie Up for its concise rendering of a romantic relationship in full. Unlike Up, this one does not end with one half of the couple dying, but it is clear from the moment the first dialogue scene begins that the honeymoon is over the moment it has begun. The two snipe irritably at each other throughout their rainy car ride to the shitty motel where they spend the night, and George seems more interested in impressing the roughnecks at the diner where they unfortunately have their honeymoon dinner than in paying any attention to his new bride.

His neglect reaches a new low when they arrive at the suburban home of George’s old war buddy, Ralph Baitz (Tony Franciosa), who has just quit his job and become estranged from his wife, Dorothea (Lois Nettleton), all in the same day, and not coincidentally. Ralph married into Dorothea’s wealthy family years (and one child) ago and was fired after telling off his boss, and Dorothea’s father, Stewart P. McGill (the great John McGiver of The Manchurian Candidate). George sends Isabel in to meet Ralph, throws her luggage in after her, and then promptly drives away, abandoning her there. If you have a hard time thinking of a better Christmas present for a newly single man in 1962 than a 24-year-old Jane Fonda, I cannot blame you for that, sir or madam.

When George inevitably returns, he barely acknowledges Isabel (or Little Bit, as he calls her) at first. Instead, he and Ralph make up for lost time with a lot of ostentatiously boisterous drinking until Little Bit has had enough and walks out on the two men, under the pretext of taking the Baitz family dog for a walk. Ralph assumes the role of marriage counselor for each of them individually as the movie progresses, and it is clear he has had time to wrestle with his life choices and is possessed of more perspective and emotional intelligence than George. Despite his fears over his son turning into a “sissy” at the coddling hands of his mother, Ralph is a progressively-minded fellow for his time, and he disabuses George of his notion that a real man is one who never shows fear or other “womanly” qualities.

The idea of masculinity hangs heavily over the entire production, from Ralph’s hatred of the doll his son received for Christmas to George’s insistence that he was never scared in the war, despite being afflicted with sometimes uncontrollable shaking and (it is heavily implied) sexual impotence as a result of his experience there. Though it is necessarily couched in innuendo, the film’s exploration of sexuality and gender roles feels all the more progressive for being in a movie that is otherwise dated in many rather charming ways. It is rare to see such an insightful movie about marriage from an era in which married couples having separate “His” and “Hers” beds was still the standard in Hollywood.