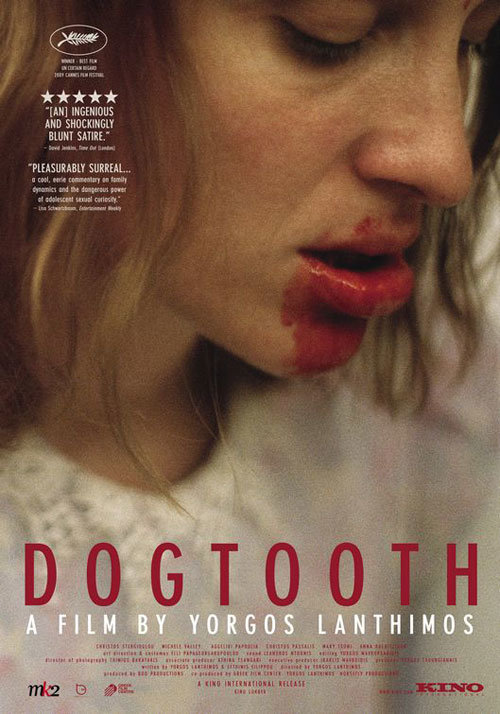 One of the most ruthless movies made this century

The best way to see the breakthrough feature from Greek filmmaker Giorgos Lanthimos (The Lobster, The Favourite) is to go in without knowing anything about its storyline. If you have not yet seen Dogtooth, I strongly encourage you to stop reading this review and watch it first, preferably without looking up anything else about it.

Still with me? I am now going to assume you have seen the movie and that it has either blown your mind and made you extremely inspired and reinvigorated about the possibilities of the cinematic art form, as it did for me on both of my first two viewings (within two weeks) nearly ten years ago, or it has outraged and disgusted you with its “mean-spiritedness,” as it did for some others with whom I discussed it at the time. Maybe it has done a little of both. In any event, you have seen the movie and I will no longer have to warn you about upcoming spoilers.

Dogtooth is a film of startling power and striking originality. The closest comparison I can make, both in style and content, is the work of Austrian provocateur Michael Haneke, the brilliant filmmaker behind The Seventh Continent, Cache, and The White Ribbon, to name just a few. Dogtooth is more perversely humorous than even Haneke’s 1997 masterpiece Funny Games (remade by Haneke himself in 2007), which is admittedly the only one (or two) of his films to strongly utilize humor. As dark, disturbing, and sometimes brutal as Dogtooth ultimately is, it is hard not to laugh at some of it, and this is clearly the desired effect.

The story of a highly unusual family unit, in which the three adult children (Aggeliki Papoulia, Mary Tsoni, and Hristos Passalis) have been sheltered from reality, presumably for as long as they can remember, by an authoritarian father (Christos Stergioglou, in a performance of terrifying power) and his submissive wife (Michele Valley), is told with documentary-style realism. As mentioned above, it is best to see this film with as little knowledge as possible of its content. In this way, the deep horror of what is going on can gradually penetrate the mind of the viewer, revealing itself by degrees.

We begin with a language lesson, in which deceptive definitions of words are given to the “children” in order to keep them ignorant and, therefore, isolated; for example, we later find out that the definition of “phone” is “salt.” The airplanes that periodically fly over the fenced-in compound in which the family is kept occasionally “fall” into the garden, and rewards are given for retrieving them. The father has employed a young security guard, Christine (Anna Kalaitzidou), at the factory he owns to provide his son with sexual release, which requires that she be blindfolded so as not to know the location of the totalitarian home, and thereby potentially destroy it. These sexual encounters are, like all the rest in the film, portrayed as rote, business-like enterprises. Eventually, Christine is even buying sexual favors from the two female children of the family for trinkets such as a sparkling headband. Gradually, the eldest becomes more aware of the world outside of the prison she and the others know as home.

As the story unfolds, we realize that there were originally four children, and that the oldest brother has escaped by going over the wall, though the father has effectively convinced the remaining children that it is unsafe for them to leave the compound until such time as they lose either their left or right “dogtooth.” In by far the film’s funniest sequence, the male child comes upon a cat in the garden and, perceiving it as a threat, messily dispatches it with a pair of garden shears. The father takes this news as an opportunity to explain what has become of the oldest brother while simultaneously reinforcing his control over the other children: he convinces them that the oldest brother was killed by a cat, which he describes as a powerful monster that could potentially kill them all unless they stay within the wall and prepare themselves for battle.

Gradually, the viewer is made to question whether the captive “children” are actually the biological offspring of the mother and father at all. In a private discussion between the two parents, the mother says she is “pregnant” again, with twins this time, to which the father replies, “Triplets?” She answers in the negative, reasoning that that would be too much. By the end of the discussion, they have concluded that she will “give birth” to not only another child, but a dog as well, presumably the Doberman Pinscher we have seen being trained at the father’s behest earlier in the movie.

When this information is relayed to the children, the mother additionally tells them that if they behave better, she might be able to stop herself from giving birth, but if things continue as they have been, she will give birth as soon as possible. This gives the unsettling impression that perhaps each of the children has been kidnapped and systematically brainwashed by the “parents,” in a similar fashion to the infamous case of Jaycee Dugard and others like it. The fact that this is never explicitly confirmed or denied makes it all the more interesting, just as the film’s overall approach of absolute realism without the benefit of exposition makes it all the more effective.

The power of storytelling, particularly in the form of the movies, is also an important theme, as the children experience the outside world for the first time through VHS tapes surreptitiously provided to them by Christine. It is never explicitly stated what exact movies she brings them, but from the new, unusual behavior we see from them after this (practicing boxing moves before a mirror, imitating a shark in the swimming pool), it is easy to infer a pair of mid-70s Hollywood classics. In fact, in the examples of Rocky and Jaws we have the two sides of that golden era in Hollywood cinema: the lonely man portrait and the big summer blockbuster.

It all ends on an ambiguous note, with the effect that it sticks in the brain long afterward and practically begs to be viewed again, an entreaty which I for one will be happy to oblige many more times in the years to come. Dogtooth is a film that examines, by presenting the most extreme case possible in such a way that it feels almost normal, the ways in which any style of parenting inevitably traumatizes the children. It also examines the effects of isolation from the outside world, exploring the practically impossible idea of impressing a perverse and completely impracticable worldview on innocent, blank-slate minds. It is an unrelentingly ruthless and uncompromising film that presents an implacable reality in which the viewer is inescapably implicated.