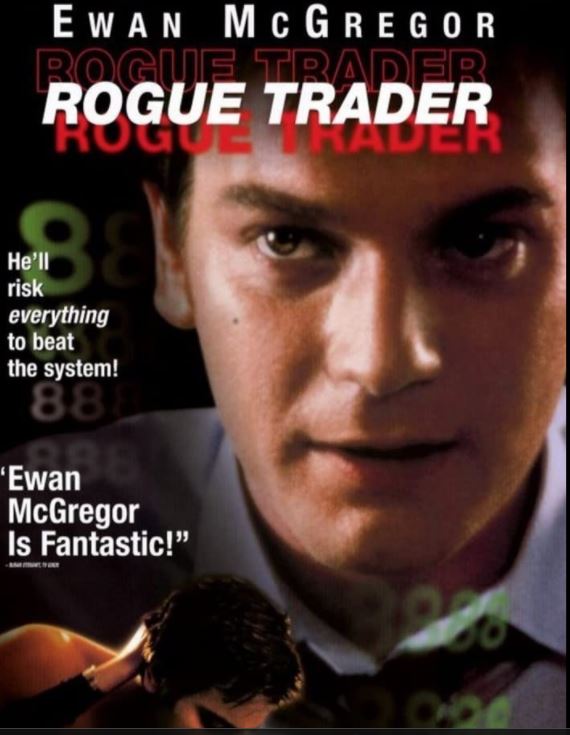 The story of Nick Leeson, a trader who bankrupted an investment house in Britian

My favorite part of Trading Places is when Winthorpe and Valentine destroy the Duke brothers. “A Duke has been sitting on this exchange since it was founded!” So I was curious to see Rogue Trader, the 1999 biopic about Nick Leeson.

You may not know who he is but he was big news in 1995. He worked for the venerable Barings Bank, which had been in business since 1762. Leeson was their trader at the SIMEX exchange. And he managed to lose over a billion dollars for Barings, bankrupting it in the process.

Unfortunately, Rogue Trader is not nearly as interesting as I’d hoped. It does at least break from the usual by not presenting a redemption arc. Instead, it presents no arc at all. We simply watch Leeson on his steady path to catastrophe.

The film is not without merit, however. It is written and directed by James Dearden. He’s best known for writing the screenplay of Fatal Attraction. But he’s also had a notable career as a director with credits like Pascali’s Island and A Kiss Before Dying. As a director, he does a fine job of making this film a good deal less boring than it might have been.

The film is also extremely well-cast. Ewan McGregor does a good job playing Leeson as a driven but oddly naive young man. But there isn’t a whole lot for him to do other than stand around looking stressed.

Anna Friel as Leeson’s wife plays the role with just a hint of Marie Antoinette, so she doesn’t come off quite as anemic as she might otherwise. Tom Wu is irresistible as a swaggering young trader. And Lee Ross is excellent as Leeson’s best friend, Danny Argyropoulos. (Fun fact: the real-life Danny plays the trader who gets in a fight with Tom Wu’s character.)

Overall, this is a well-produced film. When I first heard of it, I figured it would be a barebones made-for-TV production. That isn’t true at all. They spent real money on the film. The trading floor scenes generally have a lot of energy even while being easy to understand.

What kills Rogue Trader is its entirely banal rendering of the story. It starts at the beginning and ends at the end. And nothing surprising happens in between.

The first act establishes what he does: hide bad trades and maintain them until things turn around. The second act shows him doing this more and more while things do not turn around. The third act is him on the run, but even that is low-key and uninteresting.

In addition to this, the people at Barings are presented as being simply too trusting. They were supposedly fooled by their belief in good ol’ British notions of honor. I see them more like people who found it convenient to ignore odd behavior because they were making a fortune.

These characters especially seem ripe for a farce. This could have been the Dr. Strangelove of financial films. Or at least something as good as The Informant!

I suspect that the entire production was too impressed by the source material. Rogue Trader came out only a few years after this dramatic event â one well-known to business-types to this day. The producers clearly thought a straightforward rendering of the material would be fine.

Dearden clearly understood the problem because he worked very hard against it in the direction. In particular, he uses a much more active camera than he does in his other films. And this works really well thanks to the film hand and great eye of Jean-FranÃ§ois Robin (who was also cinematographer).

But this has its limits. Almost all of the dialog scenes are rendered with alternating over-the-shoulder camera set-ups. And this creates a disjointed viewing experience. We are treated to energetic scenes followed by static ones over and over. This mechanical start-and-stop only pushes us further out of the story.

Who Is This Film For?

For people interested in the world of futures trading, there are some interesting details. For example, in the last part of the film, he wants to cut his losses, but he can’t. Selling would cause the market to tank making his losses even worse.

But would anyone else like this film? I doubt it. If you want to spend 100 minutes watching people making increasingly catastrophic choices, Very Bad Things is a far more entertaining choice. If you want to watch a man take a great fall, there’s A Face in the Crowd and countless other films.

The people who made Rogue Trader certainly gave it the old college try. And the money spent on it is most definitely up there on the screen. But apart from its use as a cautionary tale for business students, it’s best left to its obscurity.

Frank Moraes is a business and technical writer with an unnatural love of psychotronic film.