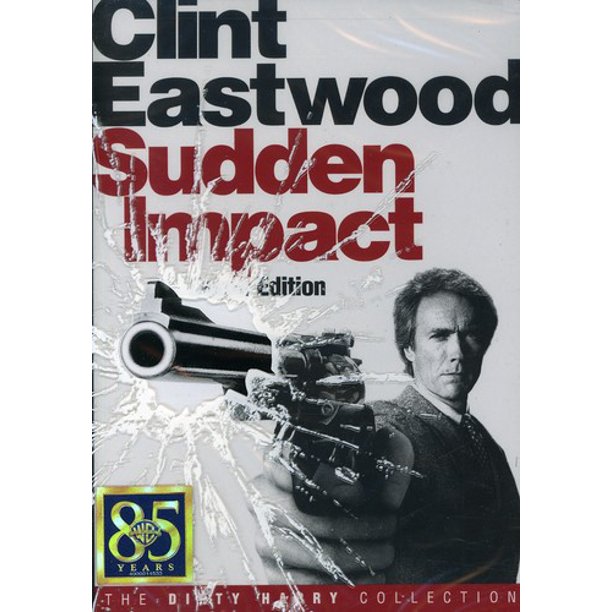 Two killers are at large. One of them is Dirty Harry.

Two killers are at large. One of them is Dirty Harry.

Revenge is best served with a comically farting dog.

All in all, this is probably the most disappointingly hetero movie in the whole series, as Harry gets closer to a woman than we have ever seen before. It is because of his shameful propensity for sex with women that his friend Horace (Albert Popwell, returning for his fourth and final film in the series), with whom Harry has earlier been seen comparing huge guns and shooting off together in the woods, is tragically killed, but there is little else here that could be construed as homoerotic.

Indeed, probably the most aggressively hetero scene in the whole series occurs when we are introduced to the movie’s Big Bad, Mick (Paul Drake), with a gorgeous lady sex worker. There is the impression that his sadistic aggression could be masking latent homosexual desires, impotence, or both, though, and he later has a final moment with Harry that calls to mind the showdown between Bennett and John Matrix in Commando, a strong contender for the gayest of all 80s Action movies. “Just let her go?” Mick shouts down to Harry, holding Jennifer Spencer (Sondra Locke) hostage. “Then it’d just be you and me!” “Come on,” Harry replies intensely, “make my day,” before shooting Mick with his huge gun.

At 20 onscreen deaths, the series continues to make the original look paltry in this category, while failing to live up to the awesome 40-count of Magnum Force. Nearly three-quarters of these kills belong to Harry, though, and most of the rest are Jennifer’s revenge murders, so nearly all righteous kills in the eyes of our lord and savior, Harry Callahan.

Jennifer’s victims all get “.38-caliber vasectomies,” as one wisecracking cop puts it, with the exception of Ray Parkins (Audrie J. Neenan), the sole female in the rape gang. As pointed out by my colleague Dave Franklin, the scene in which Harry causes a fatal heart attack in crime boss Threlkis (Michael V. Gazzo) by bluffing about evidence of a murder Threlkis ordered also has a certain ludicrous novelty to it. The final death is probably the most spectacular, though, as Harry blasts Mick with his big gun and Mick falls from a great height to be impaled on the horn of a carousel unicorn, his corpse then twirling along with the ride to a jaunty tune.

“Go ahead, make my day” is the most famous one coined in this entry, but as always, Harry is good for several more odd tough-guy one-liners, as well as some of his patented longer speeches, at least one of which is worth reproducing in its entirety:

“Listen, punk. To me you’re nothing but dogshit, you understand? And a lot of things can happen to dogshit. It can be scraped up with a shovel off the ground, it can dry up and blow away in the wind, or it can be stepped on and squashed. So take my advice: be careful where the dog shit you.”

“We’re not gonna just let you walk out of here,” Harry says grimly to another punk. “Who’s ‘we,’ sucka?” the hood foolishly replies, setting Harry up for the kill: “Smith and Wesson and me.”

“Need a lift? Then shove a jack up your ass.” (Nice one, Jennifer!)

“Suck my ass through a straw” and “cock-shot stiff” are both oddly poetic turns of phrase, the former brayed at a fellow lowlife by Ray Parkins before she attempts to proposition Harry in a dive bar. “Only with humans,” Harry sneers at her before kicking her ass to the floor.

“Somebody grabbed their chest,” Harry says after Threlkis goes into his tough-talk-induced heart attack. “They must have seen the bill.”

As usual, Harry is stymied by the stupid liberal court system from the start, seeing another righteously busted punk walk free due to his methods, including an illegal search that uncovered the murder weapon, which therefore “doesn’t exist in the eyes of the court.”

“Is it your job to incite an old man into a heart attack?” Stupid Captain Briggs (Bradford Dillman, in an inexplicably renamed role) splutters at Harry after he indirectly kills Threlkis, going on to condemn him for ruining a carefully orchestrated surveillance investigation. Harry counters that Threlkis would have just wiggled out of any case they could have built, saying, “Maybe we saved the taxpayers a little money.” Harry kills punks and hoods for the People, folks!

“You’re a dinosaur, Callahan,” Stupid Briggs tells him. “Your ideas don’t fit today.” “Just what ideas are these?” Harry rejoins angrily. “That murder’s a crime? That it shouldn’t be punished?” An odd Freudian slip there, perhaps indicating Harry’s belief that his own murders shouldn’t be punished.

Beyond Harry’s usual fights with the Stupid Chiefs, as well as the hoods and punks, of the world, much of the story centers around Jennifer’s revenge on the various scumbags who gang-raped her and her sister ten years prior. We see this in a flashback sequence lurid and brutal enough to ensure no audience member will blame her for the killings, and will in fact cheer her on. Her hard-won philosophy on justice is right in line with Harry’s and, therefore, the perspective of the movie.

“This is the age of lapsed responsibilities and defeated justice,” she says by way of small talk over drinks, after she and Harry have previously had a meet-cute in the park. “Today an eye for an eye means only if you’re caught, and even then it’s an indefinite postponement and a let’s settle out of court.” If you listen closely, you can hear Harry’s raging hard-on hit the underside of the table from all this dirty talk. Finally, a woman who gets him!

Later, after the last of the rape gang is dead and Harry knows the truth, he wavers over whether or not to arrest her, having told her in the above-mentioned scene that he is unopposed to revenge until the point when it breaks the law. “I guess now I’ve got to…” “Read me my rights?” she finishes for him. “And what exactly are my rights? And where was all this concern for my rights when I was being beaten and mauled? And what about my sister’s rights when she was being brutalized? There is a thing called justice, and was it justice that they should all just walk away? You’ll never understand, Callahan.” Harry, presumably rocking another raging justice-boner, steps outside the bounds of the law and pins all the killings on Mick, to show this sweet vigilante honey just how much he does understand.

Besides Briggs (who was McKay in the previous movie, and Briggs was Hal Holbrook in Magnum Force, I don’t know what the hell is going on here), there is the Stupid Commissioner (Bill Reddick), who actually utters this glorious speech of anger-praise for Harry: “Inspector, your methods are unconventional to say the least, but you get results. Often your successes are more costly to the city in terms of publicity and physical destruction than most other men’s failures!”

Best of all, though, is the great Pat Hingle as Stupid Chief Jannings, who seems at first to be merely hostile to the “big city hotshot,” blustering, “Everywhere you go, people get killed! I don’t like it, and I don’t like you!” Eventually, though, it is revealed that he is corrupt, just like Briggs in Magnum Force before him, and implicit in a cover-up of the crime that led to Jennifer’s revenge.

Two words: farting bulldog. Instead of a doomed partner this time around, Harry is saddled with an adorably ugly canine who contributes all the “comic relief” in the movie in the form of peeing and, occasionally, flatulence. This is the only Dirty Harry movie directed by Clint Eastwood himself, and between this and those chimpanzee movies, it would seem Clint is a big fan of the animal sidekick. Your mileage may vary. This is also the first Dirty Harry movie released in the 80s, and boy does it show, especially in the music. The great Lalo Schifrin is back, but he’s become more enamored of electronic drums (as was the style at the time), and there’s a cheesy pop song over the end credits. Still, it’s a testament to the enjoyability of the whole series that even the farting bulldog one gets a thumbs up from me.

Sadly, no. After two movies in a row with climactic fireballs, this one ends on a quieter note. You know, as quiet as a blast from a .44 Magnum and then a fall through a glass rooftop onto a ceramic spike can be.

“Nobody, but nobody, puts ketchup on a hot dog.”