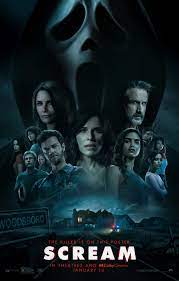 Old Scream, new Scream, we all scream for no more Scream.

I know what you’re thinking- isn’t this Scream 5? I’m obligated to tell you that the official title of this movie is Scream. Yes, it is confusing. Yes, it is indeed the fifth movie in the Scream franchise and, yes, the other sequels did indeed have numbers in their titles. I actually thought this new Scream did as well, subtly hidden in the title as a roman numeral V in the middle of the M. Turns out, the original Scream had that same design in the M, but it’s actually a knife. So, no, Scream not-Five‘s title is not clever in any way possible. Incidentally, this is the main problem with the movie – not being clever in any way possible.

(SPOILER ALERT – Run away now if you don’t want this movie spoiled. Even to the basement. By yourself.)

If you haven’t seen a Scream movie and you enjoy mildly scary movies that are really predictable and are also aware of themselves, you might like Scream not-Five. To be honest, you should actually go watch the original Scream. Scream not-Five is like the first clone of Michael Keaton’s character in Multiplicity. Loud, obnoxious, and exceptionally full of itself. Scream not-Five is so far up its own ass that it thinks creating the word requel – a portmanteau of the words reboot and sequel – is so ingenious that it will go on at length to tell you about it. When I say Scream not-Five is aware of itself, I mean to the point where Deadpool would be embarrassed.

Let’s be clear on this whole requel idea. There is no such thing. To be sure, Scream not-Five will go so far as to literally define a requel for us – a franchise entry that features a new cast of characters, while also bringing back original characters, in a story that happens after the previous movies, and making references to things that happened in the previous movies – in order to convince us a requel is a thing. How is that not just a sequel? That’s literally the definition of a sequel. A reboot can only be a reboot if all of the original canon is thrown out the window. The Amazing Spider-Man was a reboot. The only thing that can be argued as evidence that Scream not-Five is a reboot is that it’s been eleven years since Scream 4. Oh, and the title doesn’t have a number in it. Guess what Scream not-Five – that makes you a sequel. Maybe you’d realize that if you weren’t so busy trying to be so aware of yourself.

At this point, I’d normally start to tell you about the plot and how the movie begins, but since we’re already three paragraphs in, I’ll try to make it brief. Scream. That’s it. They just made the first movie all over again. Hot lead actress (Melissa Barrera) and boyfriend (Jack Quaid)? Check. Opening scene where Ghostface calls a hot girl (Jenna Ortega) to chat scary movies, then skewers her? Check. Group of high school friends in which at least one of them is the killer and the others probably die? Check. Ghostface is really two killers? Check. One of the high school kids (Jasmin Savoy Brown) lecturing everyone about the rules of scary movies? Check. David Arquette, Courteney Cox, and Neve Campbell? Check. Party at Stu’s house (one of the original killers in Scream) where the climax takes place? Ugh!! Check! And if any of that manages to slip past you, don’t worry – multiple characters will make sure to tell you about it every chance they get.

In all fairness, it’s not a shot-for-shot remake. The new characters have different names. The lead character, Sam (Barrera), is a few years out of high school, as is her boyfriend, Richie (Quaid). The movie know it all is a girl (though literally related to the original know-it-all, Randy). Um, the stabbings and killings are in different places and…uh…slightly more gruesome, I guess. Oh, and the characters all have cell phones and the Internet now. See? It’s as different as night and…later that night.

I’d like to tell you that other components of the film make up for the complete lack of creativity, but they really don’t. The original three actors look bored and tired. Actually, Arquette and Campbell looked that way. Cox looked like a deranged wax copy of herself who forgot how to act. I don’t mean to dwell on her looks, but it was impossible not to stare at her since I’d already seen this movie back in 1996. The rest of the cast was fine, but not good enough that they made me want any of them to live to the next sequel.

But the worst part of this whole movie are the most important parts of any slasher flick – who is the killer and what is the killer’s motivation? All of the previous Screams tied the killer’s motivation to relationships with the other characters. Like everything else, Scream not-Five makes sure to remind you of that through one (or more) monologues. Ironically, the motivation is the one thing Scream not-Five doesn’t copy from the original and it’s as uninspired as the rest of the film; having nothing to do with relationships to the killers. And the identity of the killers? The film all but carves the word killer on the killers’ foreheads through a combination of dialogue and acting choices, then ridicules the surviving characters – and anyone in the audience who hasn’t figured out who the killers are – for not figuring out who the killers are. Maybe they would have if they hadn’t fallen asleep during the lectures.

Like I said, if you’ve never seen a Scream movie, you might be entertained, maybe even mildly surprised by Scream not-Five. If you can get past multiple characters over-explaining the shit out of their own movie, you’ve got a chance. But, if you have seen a Scream movie, you will likely be bored by Scream not-Five and wonder why you are still sitting in the theater after having identified the killers twenty minutes in, and especially after recognizing that a requel is not a thing.

Rating: Ask for eleven dollars back if only because it’s a requel with an S.