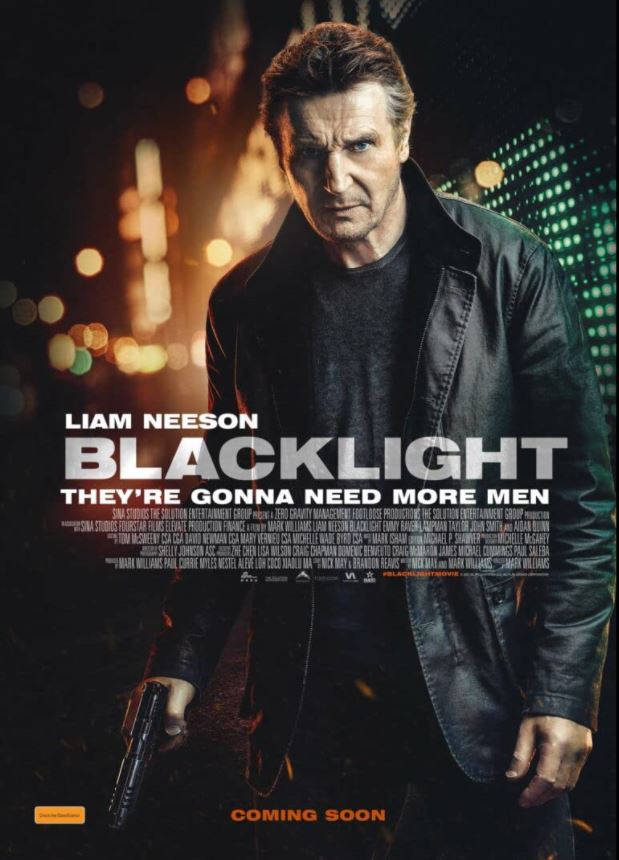 It is time to stop. Now, Liam

“Blacklight” – It is time to stop now, Liam.

There’s a new Liam Neeson movie coming out, so it must be February. Put another way, it’s February, so what is the name of the latest Liam Neeson action flick? Put a third way, there’s a new movie about a grizzled old lone wolf with a special set of skills. What is the name of Liam Neeson’s character this time? Not only is Liam Neeson the patron saint of February box offices, but he is so typecast that his name is probably used in any script featuring a grizzled ass-kicker with a special set of skills as that role.

Agent of a mid-fifty-year old actor: Hey, got a new movie they want you in.

Actor: Do I have to run like him too?

This February, Liam Neeson is playing Liam Neeson in Blacklight, a movie best described as Enemy of the State, but if it didn’t care. Put another way, *long fart noise*

(SPOILER ALERT – Come on. If you’ve seen one Neeson February action flick, you’ve seen every one he has made and will ever make.)

Travis Block (Neeson) is a fixer for the FBI, specializing in extracting deep cover agents whose cover may have been compromised or who may have lost sight of their mission. We first meet Block driving his Dodge Viagra, er…Challenger, en route to rescue an agent about to be murdered by a bunch of gun-toting, militant rednecks in the middle of the woods. Rather than go in guns blazing, Block sneaks in the back (in his extremely loud car) to talk to the agent through a back window in her trailer to tell her to be ready to run when he creates a diversion. Block has MacGyver’d a couple of things to blow up because even he knows he’s way too old for this shit.

Meanwhile (and shown prior to the agent extraction scene), we meet a Congressional candidate, Sofia (Melanie Jarnson), speaking at a rally about equality. Dusty Crane (Taylor John Smith) makes his way to the front of the crowd where he starts to chant along with everyone. Clearly, Dusty is someone important to the plot, but we won’t find out how until later. After the rally near her home, Sofia is run over by a van as she is getting out of an Uber on the wrong side of the car, enabled because the driver stopped next to a parked car. This scene is indicative of the entire film in that it is both inexplicable in the moment and even more so when fully explained later in the film. If writers Nick May and Mark Williams (also directing) put more than six seconds of thought into this scene, that’s five seconds more than I would have guessed. Of course, after watching the rest of the film, six seconds for the entire screenplay is generous.

When Travis isn’t extracting agents, he’s trying to patch up his relationship with his daughter Amanda (Claire van der Boom) and granddaughter Natalie. Amanda is concerned about Travis spending time with Natalie because she considers Travis to be paranoid and that it’s rubbing off on Natalie. Not only that, but Travis also has OCD. Both of Travis’ characteristics are pounded into the audience on numerous occasions yet have no significance to the plot at all. Not even a tiny bit. They are literally just a way for Amanda to browbeat Travis as evidence that he was a terrible father. Even worse, she seems to be aware that his job includes making a lot of potential enemies yet chalks up as pure paranoia his taking precautions to protect her when she was young (security cameras, checking all the window and door locks at night, etc.). I have to believe that a tiny part of him danced an I-told-you-so jig when Amanda and Natalie are kidnapped by the bad guys. I know a part of me did.

So far, the movie has given us a murder we can’t suspend our disbelief for and a family we couldn’t care less about. What about Dusty? Dusty is also an FBI agent, in deep cover with Sofia as her boyfriend. Ooh, is Sofia secretly an arms dealer? Secret Russian agent? Murderous clown seeking to sow chaos in Gotham, I mean Washington D.C.? Nope. She just wants equal rights for women and minorities and thinks the best way to achieve that is through legislation as a duly elected representative in Congress. Dumbass.

The only rational response to the insane idea that all people should be treated equally regardless of gender or race is for FBI Director Robinson (Aidan Quinn) to plant an agent in her organization to act as a honeypot, then eventually murder her. Unfortunately, Dusty seems to have dropped the ball by, get this, not being okay with murdering civilians and falling in love with a beautiful, intelligent, driven woman. Dumbass.

After the murder, Dusty decides he’s going to spill the beans to a reporter, Mira Jones (Emmy Raver-Lampman). Robinson sends Travis to bring Dusty in before that can open, though Travis is unaware of literally any of this. Again, he’s just the extraction guy, and doesn’t even officially work for the FBI. No, seriously – he’s a freelance extraction expert working off the books. When he tries to retire to spend time with his family, Robinson says he’ll figure out a way for Travis to keep working, but see his family more, because, and I quote “the work you do is too important.” That’s it, I’m out.

It’s bad enough that the movie is another conspiracy theorist’s wet dream about a secret government program to spy on and murder innocent American citizens for apparently any reason or no reason at all, including a prospective congresswoman’s death that only a single journalist thinks wasn’t an accident â it even has a cool name, Operation Unity, which I am not making up – but now we are to believe that the director of the FBI has only a single sixty-nine-year old capable of pulling agents out of sticky situations? A sixty-nine-year old who runs exactly like you picture a sixty-nine-year old running, but one who also is holding back explosive diarrhea? That guy has no replacement being trained for at least the past decade? Dumbass.

The entire movie is like that, except it’s made even worse by the movie jumping back and forth between spy games and family matters and not bothering to come up with any kind of interesting or logical scene or plotline. And don’t even ask about the acting. Neeson looks like he is constant pain, either because he is in actual pain from trying to do action-star stuff or because the other actors in the film are so bad it is manifesting as pain signals in his brain. Don’t get me wrong, I was expecting a lousy movie because it’s February and Liam Neeson is playing Liam Neeson. I just wasn’t expecting a movie so lazy and incoherent that even the title gave up on the movie. For all our sakes Liam, the next time your agent calls, ask him if the part is Liam Neeson and hang up if the answer is yes.